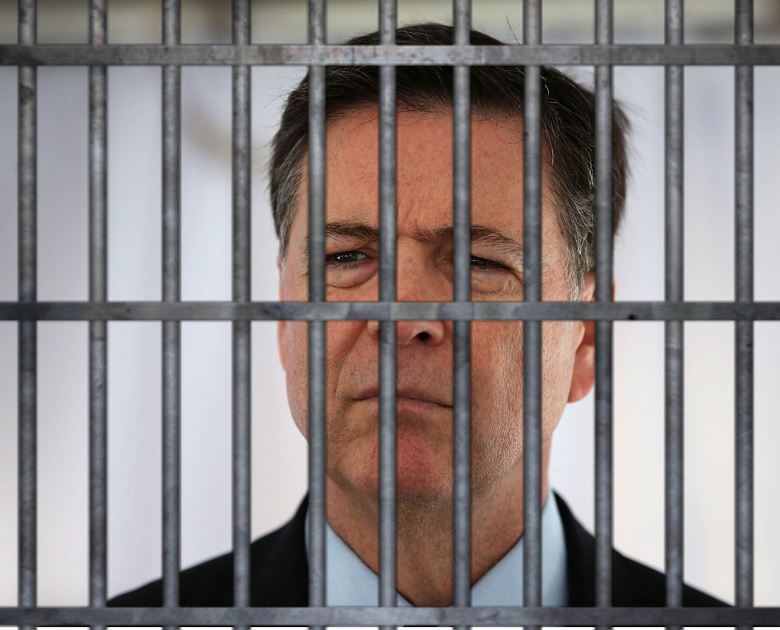 Jim Comey is now claiming his firing was obstruction of justice.  Apparently, Comey must hear those “walls [that were supposed to be] closing in” on Trump.

Jim Comey was part and parcel of several events that could end up with him in prison.  One was the DOJ / FBI cover-up of crimes by Hillary Clinton under the cover of an ostensible investigation.  That cover-up almost certainly involved the crime of spoliation of evidence.  Next was his involvement in the FISA abuse predicated on the unverified Steele dossier.  Lastly, there was his release of potentially classified information to the person whom he employed to leak his anti-Trump screed to the NYT.

Those are just the things we know in the public domain.  So it’s no surprise that Comey, a man who has been silent of late, apparently felt like a man lost in the woods . . .

. . . when his carefully choreographed effort to give Trump the Lavrentiy Beria treatment (show me the man, I’ll find you the crime) ended with Robert Mueller’s complete exoneration of President Trump on charges of collusion with Russia and punting the decision on obstruction of justice back to the DOJ.  They have since decided.  Comey knows how this goes.  No reasonable prosecutor would bring such a case.

And thus it was no surprise to find Comey on NBC Nightly News pushing the canard that Trump’s decision to fire Comey was in fact obstruction of justice:

FBI Director James Comey said in an interview Wednesday that President Trump may have obstructed justice in his decision to fire him.

Comey’s remarks came via a clip from his NBC Nightly News interview, during which Lester Holt brought the conversation back to early May 2017, when Comey testified before the Senate Judiciary Committee.

During that hearing, Comey spoke on a variety of topics, including the Hillary Clinton email investigation.

“But you declined to answer questions specifically about evidence of collusion at that point. A couple days later, you’re fired,” Holt said.

“A few days after that, I sit down with President Trump,” he continued. “He says, ‘when I decided to just do it,’ talking about firing you, ‘I said to myself, I said you know, this Russia thing with Trump and Russia is a made up story.’ What did you think when you heard that?”

Comey replied: “I thought that’s potentially obstruction of justice and I hope somebody is going to look at that.”

A swing and a miss, but it’s all Comey has left.  Now its someone else’s turn at bat.  This today from Fox:

President Trump was enthusiastic about the idea of appointing a second special counsel to review the origins of the Russia investigation when it came up during a meeting Tuesday with Republican senators, a source familiar with the discussions told Fox News.

The president was specifically reacting to GOP Sen. Lindsey Graham’s call for another special counsel as well as the senator’s vow to look into issues like the alleged abuse of the Foreign Intelligence Surveillance Act at the dawn of the Russia probe. The source told Fox News that the president seemed excited about that course during a Senate GOP lunch on Capitol Hill, which Graham and other senators attended.

All I can say is it’s about time.

To date, the collusion narrative has resulted in enough criminal activity (filing of false reports, FISA warrants, unmasking) and likely perjury (Christopher Steele to the FBI, Glenn Simpson to the House) to more than justify appointment of a special Counsel.  Since we now know definitively that there was no “collusion” on the part of Trump or anyone associated with him, that leaves the question of whether this was an outrageous and unlawful political dirty trick designed to throw the 2016 election to Hillary Clinton, then  afterwards, to destroy Trump’s Presidency, in essence overturning the results of the 2016 election.

In that spirit Sharyl Attkisson has listed The Many Unanswered Questions About the Trump Investigation she would like answered.

If, in the end, Mueller found no convincing evidence that Americans colluded with Russia, how did top current and former U.S. intel officials supposedly become so convinced otherwise?  In fact, one might ask, were they really convinced, or were they promulgating a narrative they knew was at best unproven and quite possibly false?

How and why did ex-MI6 spy Christopher Steele come to meet with certain Russian sources close to President Vladimir Putin in 2016, as they supposedly passed on the wildest sort of rumors about Trump, which Steele then wrote up in his “dossier” for Glenn Simpson’s Fusion GPS?

Did these Russian sources, Steele, and Simpson conspire to influence the 2016 campaign?

How did the former UK ambassador to Russia, Sir Andrew Wood, learn about the “dossier,” and how was it that he then told Sen. John McCain and McCain’s onetime adviser David Kramer about it as they attended a security conference in Halifax, Nova Scotia, in November 2016?  Did this contact qualify as an additional foreign attempt to influence our election?

Who at the FBI and Justice Department believed that the dossier, funded by Democrats and the Hillary Clinton campaign, passed the credibility test without even minimal verification?

Who further determined that the dossier merited inclusion as evidence in an application to wiretap Trump campaign adviser Carter Page?

Who thought it was a valid idea to continue to wiretap Page, time after time after time, as if he were a Russian agent, while they apparently turned up no evidence that he was?

Did any Foreign Intelligence Surveillance Court judges question the FBI’s relentless pursuit of Carter Page and the dragnet the wiretaps allowed them to secretly cast for those around him, including, quite possibly, Trump?

Who was behind the campaign of anti-Trump leaks—frequently including false information—that became ubiquitous in the news media?

Who worked to make the entire false conspiracy theory about Russia colluding with Trump or the Trump campaign dominate our news and political landscape day in and day out?

What other mistakes did they make, and what actions did they take based on any such mistakes?

Were any of the “unmaskings” of American citizens by these intel officials in 2016 politically motivated?

[Samantha] Power reportedly told Congress that many of the hundreds of “unmasking” requests made in her name in 2016 were not made by her. It should be simple to track where those requests originated and who signed her name to them. Has anybody attempted to learn who committed this alleged national security crime?

What did the Justice Department ever do about the criminal referral Sens. Chuck Grassley (R-Iowa) and Lindsey Graham (R-S.C.) made against Steele in January 2018?

What happened to the criminal referral made by the Justice Department inspector general almost a year ago against former FBI official Andrew McCabe over his alleged lying to investigators about his media contacts?

Has anyone been held accountable for the FBI’s supposedly lost or accidentally erased text messages and emails relevant to the investigation?

Were some of those involved in furthering the false Trump–Russia collusion narrative trying to deflect from real crimes or other wrongdoing? If so, what?

Did Mueller’s investigation touch upon or attempt to answer any of these questions as his work led him to conclude that Trump–Russia collusion never happened?