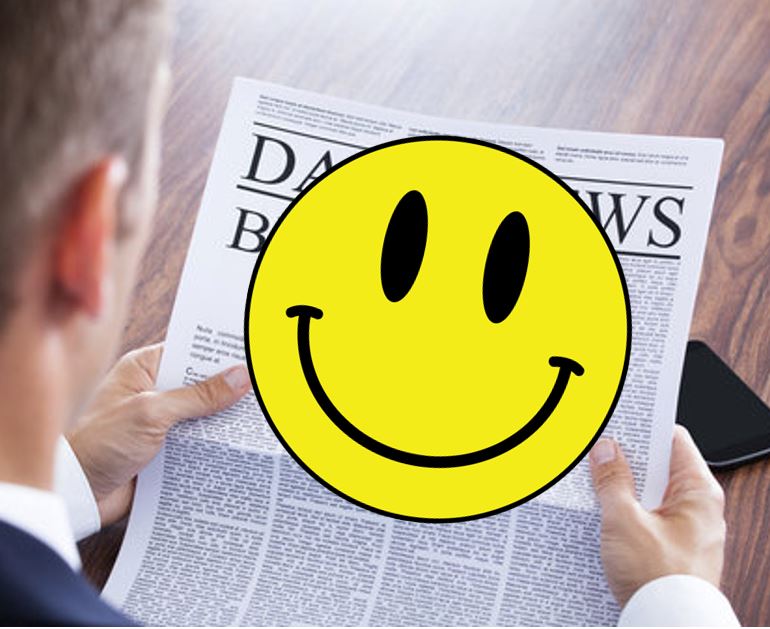 Thanks to President Trump, it’s mostly good news out there, which is great for America (yay!), but limiting for a blogger. What do you think?

Scott Adams made an excellent point the other day, which is that, now that the media can no longer waffle on about Russian collusion (at least those in the media who retain some vestiges of sanity), there isn’t much news going on. After all, news tends to follow the “if it bleeds it leads” principle or, alternatively, “if it creates panic it leads” principle.

Thanks to Trump, Adams notes, all the panic points within America are gone. Trump is building the wall and threatening to give sanctuary cities what they asked for; North Korea seems to be pacified; the Mullahs are feeling pressure from reinstated sanctions; the economy is roaring, people haven’t died in droves since the Trump administration and the courts clipped Obamacare’s wings; Israel has a real ally in the White House; ISIS is militarily gone; Saudi Arabia is moderating, etc.

Moreover, Adams believes that even anthropogenic climate change (whether one believes in it or not) is going to become a non-issue, not because of Occasional-Cortex’s Green Nude Eel, but because of something called Generation Four Nuclear Fusion. If you haven’t heard about Generation Four Nuclear Fusion, Adams touts it as a system that’s not only safe, but that also burns up all that dangerous used nuclear material from old-style reactors.

All I know about Generation Four Nuclear is what I hear from Scott Adams, so I can’t tell you any more about it. Perhaps you can tell me more. Adams claims, though, that it will cleanly and safely produce electricity all over the world, rendering climate change hysteria moot.

Of course there’s still stuff in the news. The fire at Notre Dame was a true headline maker. The post-fire stories are interesting too. As best as I can tell, because Notre Dame belongs to the state, not the church, all the usual suspects on the Left are pleading for it to be re-built in modern ecumenical fashion, without all that nasty religious messaging that hangs about the old church. Imagine a multi-cultural Notre Dame, complete with a Muslim prayer complex, a Wiccan room, an LGBTQ workshop, and all the other accouterments of modern faith movements.

What surprised me most was the speed with which the government pronounced that the fire was just a workplace accident. Considering that a 900 year old church went up in flames, you’d think they’d want a little longer to investigate before coming up with a conclusion.

Meanwhile, Pamela Geller offers some different information from those familiar with the restoration work going on at Notre Dame, namely that:

The conservative groups I follow are unanimous in believing that, even if Islamists started the fire, the French government cannot and will not implicate Muslims because it’s too politically dangerous for Europe’s ruling Leftists to do so.

However, others point out, quite accurately, that the usual Islamist suspects haven’t claimed responsibility, so it may really have been a pure accident. After all, those working on the church have a vested interest in proclaiming their innocence and pointing the finger elsewhere. But again, we cannot expect an honest appraisal from the government because politics will invariably beat out truth. This means that, even if the government telling the truth that it was a workplace accident, at least 50% of the West’s population will think that the French government is lying.

So yes, Notre Dame is newsworthy.

And of course, what’s endlessly newsworthy is the ways, both big and little, in which the Left continuously presses at America’s culture and at reality itself. Borders, transgenderism, feminism, #MeToo, climate, clown car Democrat presidential candidates . . . it’s all there. But blogging about it sometimes gets a little redundant, because I’ve blogged about it all before.

To be honest, I can hold forth forever on these familiar topics, because they always act as a burr under my saddle. But who among you wants to read iterations of the same post over and over? President Trump is just too good at what he does.

Tomorrow, though, I think I’ll blog about Pete Buttegieg. I find him quite threatening, because he’s the gay version of Obama, with the added twist of a military background. Take away the politically correct status and the Ivy League polish, though, and he’s Obama all over: Bland platitudes covering the hard Left politics of a red diaper baby who is, to date, a stunningly unsuccessful politician.

Anyway, that’s where my thoughts are going. Please chime in with yours.