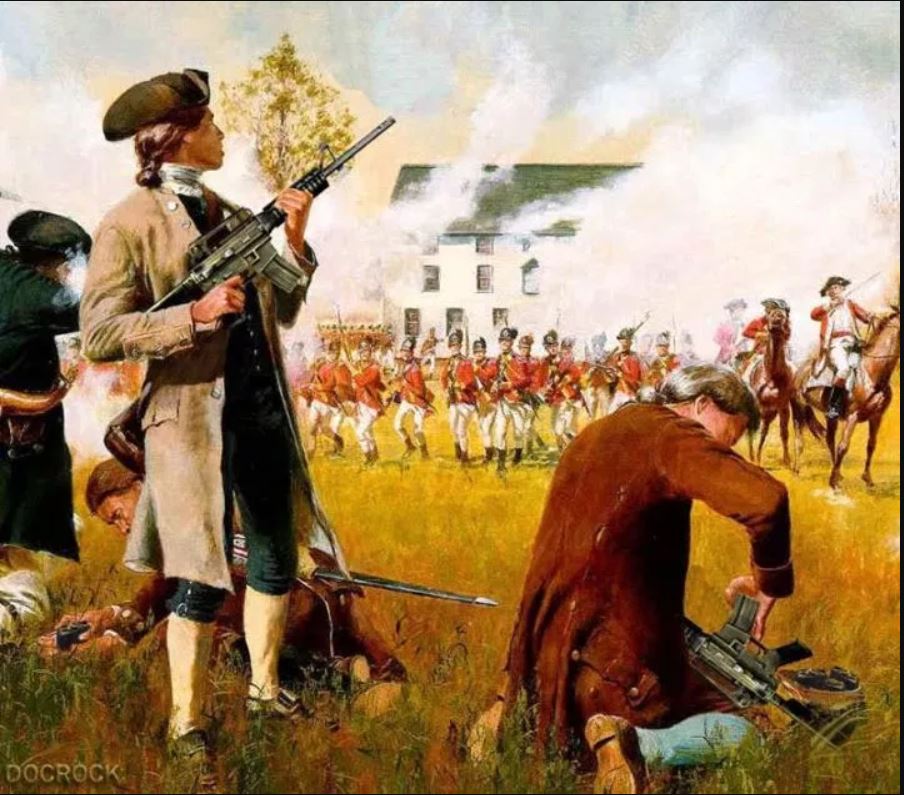 We are in the 7th decade of a slo-mo socialist revolution in America, but there are signs it will be followed by a successful Second American Revolution. 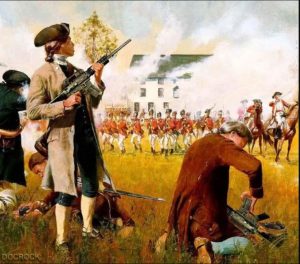 One of my favorite books is Daddy-Long-Legs, an epistolary novel that Jean Webster wrote in 1912. The letter writer is Judy Abbott, a young woman who was raised in an orphanage but who ends up at a college much like Vassar (Webster’s own alma mater) thanks to an anonymous benefactor. The benefactor has only one request for Judy in exchange for her four years at an elite women’s college: She must send him letters describing her college experience. It’s a sweet book and stands the test of time very well.

Jean Webster herself was a very Progressive woman in the Woodrow Wilson mode. Indeed, true to the whole Wilson/Margaret Sanger political and social ethos in which she lived, her sequel to Daddy-Long-Legs, another epistolary novel called Dear Enemy, Webster argues strongly in favor of eugenics. The book never mentions abortion, but it makes a vigorous case that “defectives” — alcoholics and people with family histories of insanity or just not being very bright — should not be allowed to breed. Poor Webster might have done better herself had she chosen not to breed, for she died in 1916 from childbirth fever.

But back to Daddy Long Legs…. At one point in the novel, Webster has her heroine announce that she is a revolutionary, but not the nasty violent kind. Instead, she is a nice revolutionary:

That’s a Socialist who’s willing to wait. We don’t want the social revolution to come to-morrow morning; it would be too upsetting. We want it to come very gradually in the distant future, when we shall all be prepared and able to sustain the shock. In the meantime we must be getting ready, by instituting industrial, educational and orphan asylum reforms.

Webster’s was a pithy and accurate definition of Fabian socialism.

Thinking about it, a Fabian revolution is precisely what we’ve seen taking place in America since the years after World War II. Other countries’ revolutions — or even America’s own 18th century revolution — have been violent, abrupt upheavals. Societal institutions resisted the revolutionary ideas until guns and blood effected a change.

In America, the middle class sought freedom from overweening government power and corruption. In France, the intellectual class sought to switch to itself the power that the monarch had long held. The same was true with the Russian revolution. In China, rather unusually, it was the workers and the students who overthrew, not just the corrupt government, but the intellectual class as well, a model Pol Pot followed in Cambodia. You can mentally page through other revolutions around the world and see that they’re bloody affairs.

To date, though, our second American revolution has not been an abrupt, bloody, convulsion. Instead, it has been exactly what Judy Abbott envisioned: a revolution that came “very gradually,” with Leftists slowly but steadily working their way through every American institution. Sure, there’s been a bit of violence in the streets, both during the Vietnam and Iraq Wars and during the first two years of the Trump presidency, but it’s been street theater rather than the mass bloodshed and formal armed warfare that has attended past revolutions at home and abroad.

The real changes in America have been in colleges, in news media, in the entertainment world, in the publishing world, in high schools and elementary schools, and even in libraries, where men dressed up as women read to toddlers who, judging by pictures, appear both fascinated and horrified by the bizarre spectacles before them. Oh, and of course our corporations have also been moved to the Left by the Fabian revolution as college grads have successfully moved into mid- and upper-level managerial positions that were once held by people who weren’t educated in the Fabian socialist tradition. The social media and other tech giants are populated entirely by college grads or people like Bill Gates and Mark Zuckerberg who were in college long enough to absorb its hard Left ethos.

I happen not to like this socialist revolution, soft though it’s been. My preferred theory is “that government is best which governs least.” As I tried to demonstrate in this old post supporting the Second Amendment, there is no killer in the world more cruel and efficient than government. No individual or corporation comes even close.

As the increased rationing of care in Britain shows, government does not love its citizens. Cradle to grave care works only as long as there’s some residual money left over from the free market system. Once that money’s gone, government almost gleefully decides who lives and who dies. Your family, meanwhile, is very likely to impoverish itself to keep you alive.

Government is also a miserable money manager — and you need look no further than Venezuela to see what I mean. Within less than twenty years, it went from one of the richest (the richest?) countries in Latin America to being a complete economic basket case, with people dying in barren hospitals and starving on the streets. That is, they’re starving and dying of disease when they’re not being gunned done by their own government.

I could go on but I think most people already have their minds made up about whether they want to live in a country defined by individual liberty or a country that’s a dystopian cross between the world’s worst Department of Motor Vehicles and an abattoir. I mentioned a few paragraphs ago that I want the world of individual liberty and have seen enough of world history, along with current news, to know that nothing worse can happen to a country’s citizens than to fall prey to socialism.

My understanding of socialism based on two centuries of real world examples is why I don’t think Bernie is a sweet, but gaga old man; I think he’s a genuinely evil tyrant wanna be. I have a few essays on the subject that I wrote in 2016, which you can find here. Given that Bernie is currently having a hard time staying to the left of the other whacked out Democrat Party clown-show candidates, I may have to update and revamp that blog to accommodate all the new, evil craziness coming down the pike.

Since I dread socialism, I look for hope. Today, I’ve seen one sparkling sign of hope and had one hopeful thought.

The sparkling sign of hope is the Oberlin verdict. It was wonderful when the jury awarded Gibson Bakery $11,000,000 in its lawsuit against Oberlin based upon Oberlin’s deliberate effort to destroy the fifth generation family bakery because the bakery dared to call out a student shoplifter (who then joined with two others to commit assault). Things went from wonderful to glorious when, today, the jury piled on another $22,000,000 in punitive damages.

My joy doesn’t arise merely because Oberlin deserves to be destroyed, which it does because it’s one of the most pernicious influencers in the Fabian revolution that surrounds us. It also comes from the fact that the verdict proves that there are still Americans who believe in the American way and who will take a stand against the Social Justice Warriors who are at the forefront of America’s Fabian revolution.

Speaking of the “forefront of America’s Fabian revolution,” that forefront, the Ground Zero of the revolution, is America’s colleges and universities or, as I call them, Americans institutions of higher indoctrination. It is these institutions that seed everything. If Fabian Socialism is an infected boil, spreading its toxins through every American institution, the colleges and universities are the pus lying at the center of that boil. Lance the boil and expel the pus . . . and you might have a chance to help the rest of the body recover. One way to lance the boil is to withhold every penny of federal funds, whether in the form of grants or student loans or anything else, from all colleges and universities. If they can’t survive in the free market, they deserve to go down.

But as so often, I digress. I wanted to get back to happy thoughts. The Oberlin verdict led me to another nice thought, the hopeful one I mentioned. You see, sooner or later, no matter how gradual and Fabian a revolution, revolutions will turn violent. Most revolutions are violent in the initial phases and, with the exception of the American revolution, they remain violent for decades and generations after. As Jesus presciently and wisely said, “all they that take the sword shall perish with the sword.” There are purges and overthrows and more purges and mini-revolutions that are squashed and praetorian guards and it just goes from ugly to really ugly, with death always attendant on the revolutionaries and their progeny.

But slow-moving revolutions can turn violent too. Take the Muslim revolution in Europe. For several decades, Muslims have slowly been moving onto the Western European continent, whether as Turks in Germany, Algerians in France, or Pakistanis in England. Most were peaceful enough, although many were addicted to welfare. Now, though, they’ve reached critical mass in those countries, with help from the recent flood that Obama trigger and Merkel welcomed. This critical mass has seen violence become endemic in Europe and I predict that it will soon become epidemic. Then — poof! — no more Christian, Enlightenment Europe, and no more post-Enlightenment socialist-bureaucracy EU. Instead, it’s the Islamic Continent of Europe.

Slow, Fabian-style revolutions can also turn violent, not because of critical mass, but because the revolutionaries fear that victory is being snatched from their grasp. The perfect example is the mass hysteria following Trump’s election. For the Fabians, Bush was tolerable, although just barely. When Trump came along, Bush Derangement Syndrome looked like the common cold compared to the Black Death that is Trump Derangement Syndrome. Antifa went mad. Others went mad. Violence happened.

But here’s where the hope comes in: The socialist leaders in their incubators in America’s colleges and universities were so invested in the success of their Praetorian revolution than they never even considered that they might need a military branch. They haven’t trained fighters; they’ve trained snowflakes. The snowflakes periodically get screechy and vicious, and some will gather in dangerous mobs, as happened at Berkeley both when Milo and Ben Shapiro came to speak, but they’re not warriors. The vast majority have been trained for decades to fear guns and to run for help to the academic mentors when the going gets tough.

It’s the real Americans — the ones who believe in the Constitution, including the Second Amendment, and who believe in individual rights and self-reliance — who still know how to fight. I devoutly hope that the true Second American Revolution, the one that is a push-back against the socialist Fabian revolution that slowly occurred right before our un-heeding eyes, never needs to go outside the voting booths and courtrooms. However, if the Social Justice Warriors decide to continue their revolution on the streets, I’m pretty sure they’re going to lose quickly and efficiently.