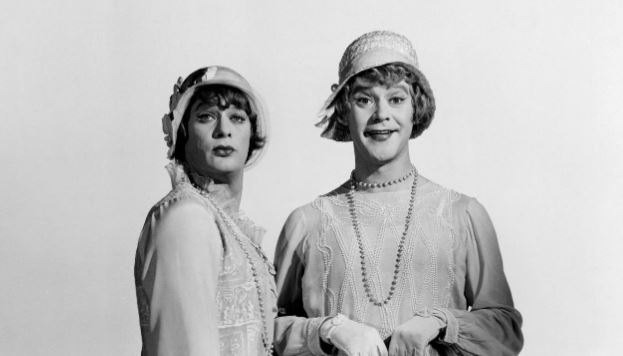 Even as Proggies push transgenderism, telling us a trans woman or man is a real woman or man, their own behavior shows they know this is a scam.

Leftists repeat endlessly that those people whom they call “transgender” are really the sex they claim to be, rather than the sex their genes cause them to be. A man named Julia Serano, who thinks he’s a woman, wrote an entire very, very long post entitled Debunking “Trans Women Are Not Women” Arguments to this effect.

I’m cherry-picking here, but the following is my understanding of a few of the arguments Serano makes to establish that he and those like him are women. I consider each nonsensical, but won’t debunk them now, because I have a different goal for this post:

There are more “arguments” to be found at the link, but you get my point. Serano isn’t trying to convince us that he’s more to be pitied than censured because he suffers from a mental illness that makes him believe he’s a woman. Instead, he is insisting that he is, in fact, a woman.

The above is from a self-published post at Medium. Don’t let that fool you into thinking, though, that Serano is just a lone voice in the LGBTQ+ wilderness. During June (Gay Pride Month), the New York Times gave some of its rarefied real estate to Serano, publishing an op-ed he wrote assuring us that the “science of gender is rarely simple.” That’s gobbledygook.

The reality is that science of sex is very simple: Among mammals, including humans, there are two sexes, male and female. Within each species, the biological gender differences are very strong, both physically and mentally. Nature/God (take your pick) did it this way to encourage two things: (1) survival ability in order to (2) procreate. In rare cases, kids are born with tangled sex genes, but . . . as I said, it’s rare.

The “science” of “gender” is a make-believe 21st century construct aimed at (1) making formerly marginalized people feel that they are part of the big bump on the bell curve of human behavior, rather than hanging out in the lonely, long-tail ends and (2) deconstructing traditional morality and family relationships in an effort to weaken Western civilization and bring in a shining new Leftist paradise.

Although Serano doesn’t mention those issues in the op-ed, he assures us repeatedly that he knows whereof he speaks . . . because he’s a “transwoman” who studied biology.

Serano is not alone in insisting that people who think they are the opposite sex are actually the opposite sex. Other major players in America — media outlets, academia, politicians, “influencers” — repeatedly assure us that “trans women” are women and “trans men” are men. (The issue usually revolves more around men who think they’re women, rather than vice versa, because women really aren’t thrilled when a man wanders into the bathroom, locker room, or prison cell block, or beats the pants off them in athletic competitions.)

An example of this thinking in academia comes from Heidi Levitt, a professor of psychology at the University of Massachusetts in Boston, has written that “trans women are women.” She did so in a publication associated with Rachel McKinnon, a man who enters bike races as a woman and then bitches when women complain that he keeps winning.

Teen Vogue, a magazine about which I wrote a long time ago, before other conservatives realized how toxic it is, assured its young readers just this spring that “a trans woman is a woman,” right down to her female penis and gonads. Thankfully, the magazine’s print edition (which came to my house as a “freebie” when my then-teenage daughter ordered a shirt from an online store catering to teens) has gone out of business. This means it won’t show up in the mail anymore. It still has an online presence, though, and a robust one at that. In one year, from 2016-2017, the number of visitors it received grew from 2.9 million to 7.9 million. If you check out its Alexa statistics, you can see that, while it’s still behind traditional teen magazines, its traffic is steadily growing.

Last year, when women started getting irked at being pushed aside by men claiming to be women, women’s groups — true women’s groups — began announcing the obvious: Women don’t have penises. The media rushed to assure Americans that this was ridiculous. One example is this, from Newsweek: “Well, since gender identity is not determined by what kind of genitals someone has, a person with a female gender identity might well have a penis. In other words, yes, some women do have penises.”

Twitter, meanwhile, is permanently barring women who dare state that men are not, in fact, women.

The New York Times(again)  gave a platform to those activists who seek to silence women who object to having their sex coopted by men. In an article entitled How British Feminism Became Anti-Trans, Sophie Lewis, a “feminist theorist and geographer,” lambasted those women she refers to as TERFS (Trans-Exclusionary Radical Feminist). In addition to giving thanks that TERFism hasn’t taken hold in America, Lewis insults in the strongest possible terms those feminists who believe men are not women. They are, she says, “part of a long tradition of British feminism interacting with colonialism and empire.” Ouch! Since most of these TERFS are old-fashioned Leftist feminists and lesbians, that kind of insult has got to hurt.

The ultimate statement of this fantasy mindset about transgenderism came from a tweet by IAM:

If a woman has a penis, her penis is a biologically female penis.

IAM, incidentally, is waging a war, not just on sexual biology, but on grammar. IAM claims to be a “they/them.” (Sam Smith, a singer, recently did the same.) I find this deeply offensive. English has three singular pronouns: He, She, and It. They/Them is plural. Unless these people add to their mental illness the claim that they have split personalities, they are not plurals. But I digress….

Rather than belabor my point, which is that the Leftist insists that “trans women/men are in fact women/men,” I suggest you read Neil Munro’s excellent summary of the transgender movement and the political strides it’s making.

How do we know Proggies don’t believe their transgender talk? We know because whenever a person with gender confusion pops up in the media, whether for having done something or having been victimized, that person will be described as a “trans woman” or a “trans man.” A case in point is a sad story about a recent murder:

The body of a black transgender woman was recovered from a torched car in Clewiston, Florida, last week. According to the Human Rights Campaign, Bee Love Slater is the 18th transgender woman to be killed in 2019.

If the Proggies really believed that a “trans woman is a woman,” why are they referring to the person as a “transgender woman”? Shouldn’t this sad story simply read, “the body of a black woman was recovered….”

Of course, one could argue that referencing the person’s transgender status is a way of highlighting the fact that people who claim to be the opposite sex are often on the receiving end of violence, whether because of hate crimes or because their lifestyle choice leads them to walk on the wild side? (Notice that cute reference to Lou Reed’s Holly?)

The reality, though, is that the media, which is almost entirely Leftist, and the Democrat political class, which is by definition Leftist, never talk about these people as “women” or “men.” They are always described as “trans.”

But think about this: “Trans” means movement from here to there . . . as in moving from female to male or vice versa. In other words, the insistence on attaching that term to people who have made this movement is a recognition that they are not, in fact, the sexual destination to which they moved. They are pretenders. A trans woman is not a woman — it’s a man who wishes he were a woman, wants to act in public as if he were, and expects people to treat him accordingly.

Sympathy, though, does not mean that I will accept that anorexics are fat, that voluntary amputees have “alien” limbs attached to them, or that someone is a dragon, alien, or bunny rabbit. Nor will I be brainwashed or bullied into thinking that someone is not the sex their biology dictates — especially if, as I tried to prove here, the one doing the bullying knows it’s a scam.

UPDATE: I made a throwaway remark about the risky lives people who identify as transgender often live. And then I read this in today’s American Thinker. I’ll remind readers that I worked for two virologists back in 1981, when AIDS was starting to manifest itself in what seemed to be isolated outbreaks of rare diseases in gay men (e.g., Kaposi’s sarcoma, pneumocystis pneumonia, etc.). That’s when I learned about the staggering promiscuity in the gay culture. I assumed (and, it seems, assumed correctly) that transgenders, being an outré subset of that subculture have their own dangerous behaviors.