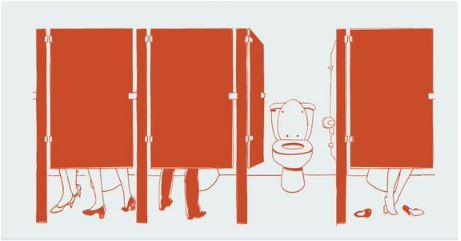 The NYTs’ piece about women’s alleged poop paranoia is another weapon in the Left’s ongoing war to shred women’s privacy and get men into women’s restrooms. 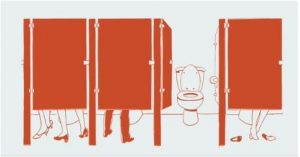 I have written several posts over the years about the Democrats being the party of poop, to which I’ve linked at the end of this post. Democrats can also claim the honor of having turned one of America’s most beautiful cities (that would be my hometown of San Francisco) into a literal sh*thole. And just today, the New York Times added another entry, one that’s more nefarious and less unintentionally humorous than people realize: 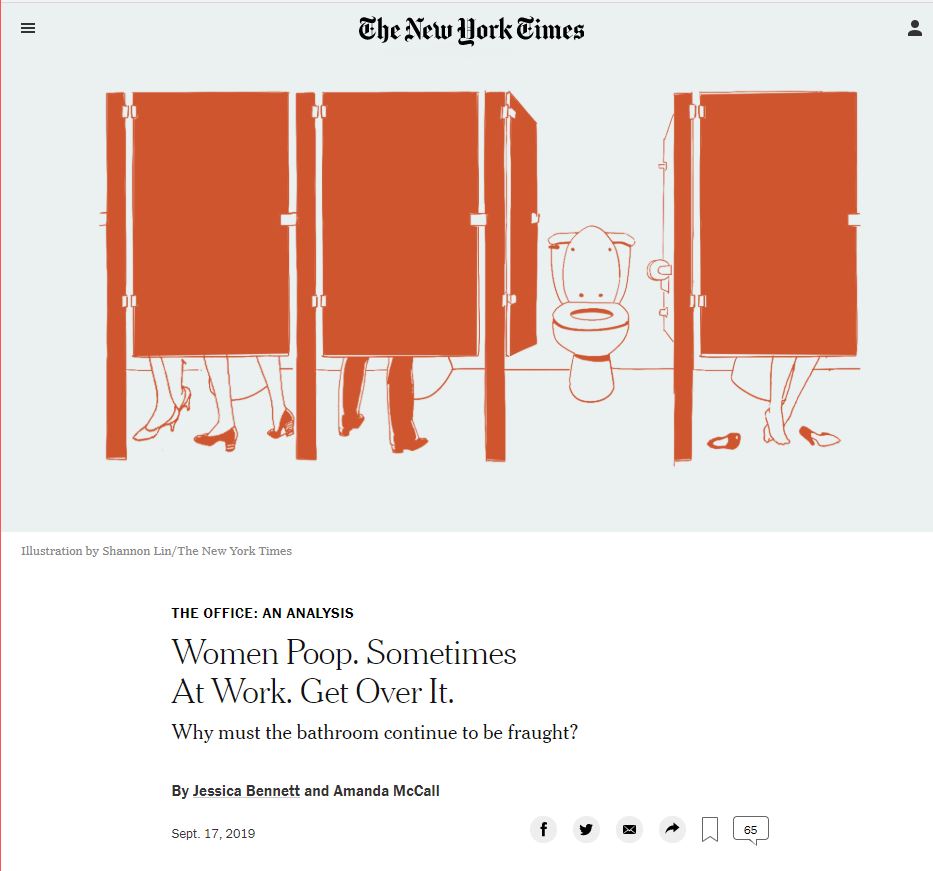 It is no exaggeration to say that the article is full of fecal matter. I put on gloves, sprayed myself with disinfectant, and glanced through it to discover the Left’s latest fecal fantasy. What I found was a lot of feminist silliness and an underlying message that women are victims buying into the patriarchy if they believe that they should be allowed to use the toilet without an audience, especially a male audience.

Before I get to the meat of the matter, I have to discuss the picture illustrating the article, because it’s really confusing. Looking at the far left stall, some have commented that it appears that two women are in there, maybe having a nice conversation while one poops or maybe engaging in some weird fetish stuff that I don’t want to think about. However, closer examination reveals that the woman on the left cannot be an active participant in what’s going on. The artist’s childlike warped perspective can lead to only one conclusion: That poor woman is trapped within the wall of the stall, kind of like this:

I’d prefer not even to touch upon the other images, one of a man doing things, another of a scary smiling toilet, and the last of a woman who made herself at home by taking her shoes off in a dirty public bathroom. Oh, ick! But still, if you read on, that man will make an appearance in this post.

The article’s text tells us that women need to stop being embarrassed that they have bodily functions and that poop smells. If only the corporate world would pay attention to this problem!

We may be living in an age where certain pockets of the corporate world are breathlessly adapting to women’s needs — company-subsidized tampons, salary workshops, lactation rooms. But even in the world’s most progressive workplace, it’s not a stretch to think that you might have an empowered female executive leading a meeting at one moment and then sneaking off to another floor to relieve herself, the next.

Poop shame is real — and it disproportionately affects women, who suffer from higher rates of irritable bowel syndrome and inflammatory bowel disease. In other words, the patriarchy has seeped into women’s intestinal tracts. Let’s call it the pootriarchy.

Yes, the gray Lady is now concerned about “the pootriarchy.” I learned from my mother, who spent her last years in an old age home, that one of the ways in which extremely demented elderly people revert to their infantile status is to play with poop. At first glance, it appears that the same holds true for demented elderly media outlets. I smell a more nefarious motive . . . and really, it does smell just like poop.

The core of the article is the claim that women have been oppressed for centuries by having to hide their bowel movements while men can publicly poop and fart with style and humor. The article is correct that men and women in Western society approach voiding differently, but I’d like to suggest that it’s not the patriarchy that did this. It’s because, outside of the world of transgender madness, men and women have different bodies.

When it comes to voiding, the primary difference between men and women from the waist down is the penis. Thanks to that handy-dandy watering hose, men can pee while standing up and fully clothed. It’s an awesome thing. It’s discreet and it makes it easy for men to relieve themselves publicly. They’re necessarily going to become more comfortable with any public voiding.

Women, meanwhile, need to strip down and squat down to pee (although they can stand if they don’t mind peeing all over their feet). That’s an extraordinarily vulnerable position in which to find oneself. In war zones, when men have to defecate from the same vulnerable position, they’ll take a friend with them to guard them against enemies who may sneak up on them. In civilized societies, women guard against predators while in this vulnerable position by demanding privacy.

In other words, putting aside all the third-wave feminist crap in the NYT’s latest entry in the poop wars, women’s poop issues aren’t about the patriarchy, they’re about safety. But the Times doesn’t acknowledge this. As the illustration above shows, it wants to do away with privacy altogether by making men a part of every woman’s bathroom experience.

The goal of an article like this is to further the push for getting men into women’s bathrooms. Women who want privacy are shamed by being told that they are victims of the poop patriarchy. They need to get over it, the LGBTQ crowd, sex perverts, and useful idiots insist, and let men join women while women are at their most physically vulnerable.

By the way, if you are the type of person, male or female, who prefers not to share your internal body odors with others, I recommend Poo-Pourri Before-You-Go Toilet Spray

, which I’ve learned through my little Bookworms is very popular among college students who live in close confines.

The “party of poop” revisited

The party of poop strikes again

Science may explain why the Left is the “party of poop”

A new entry in my ongoing Progressive Party of Poop Series

The leftist obsession with poop just keeps rolling along