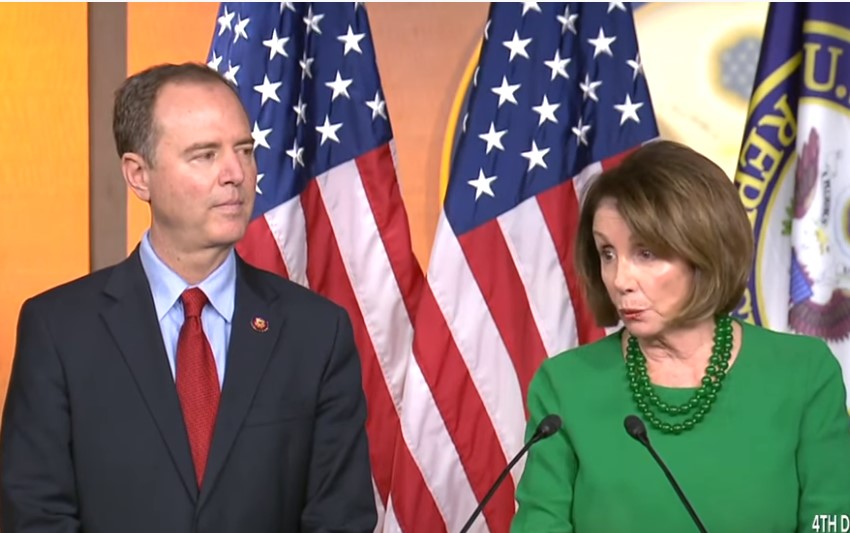 As the Pelosi-Schiff progressive impeachment push falls apart, it seems ever more likely that the “whistle blower complaint” and the IC IG’s handling of it was a deep state hit — a seditious act of unlawful manipulation of the law.

The Left’s impeachment narrative is falling apart.  This was supposed to be about a “quid pro quo” that saw Trump telling the Ukrainians that any future aid would be conditioned on providing “dirt” on Joe Biden.  How do we know today that even this one-sided Star Chamber proceeding, being conducted in secret, is not producing the narrative Schiff and Pelosi want?  Just watch Adam Schiff on Face the Nation Sunday, moving the goal posts on what constitutes an impeachable offense, saying now that proof of a quid pro quo of military aid for dirt on Biden is no longer needed to impeach the President:

Schiff, a deeply unethical man who claimed to have proof of Trump’s conspiracy with Russia for years, is not a man given to cautious understatement. If he had any information that he could possibly dress up as evidence of a quid pro quo, he would be screaming about it.  So to see Schiff now preparing the ground for a push to impeachment on something far less and different, then that means that his case has fallen apart. The only thing keeping his case afloat at the moment is that it is being run in secret, and thus his failures aren’t being pointed out in public daily.

This was a “whistle blower” complaint that never should have been.  The complaint’s subject matter was outside the intelligence community’s jurisdiction.  The complaint’s genesis almost certainly involved illegal leaks.  Staffers for Adam Schiff coordinated the complaint from its inception.  And if the IC IG, Michael Atkinson, was not in on this, I’d be amazed.  The IC IG’s handling of this case failed at every level.

Think for a moment what would have happened had this complaint about the Ukraine quid pro quo landed in the public eye under a scenario other than the “urgent concern” whistle blower complaint.  If this hearsay complaint had been leaked to the press without that IC IG imprimatur upon it, the leak would have lasted a week in the news cycle and Adam Schiff would have grandstanded and demanded a transcript of the July 25 Trump-Zelensky phone call.  The President would have denied the allegations and refused to provide a transcript of the call since it was protected by executive privilege.  With that stalemate, the news cycle would have moved on.  Instead we are living through yet another coup attempt.

So, how and why is this “whistle blower complaint” illegitimate and unlawful.  One, I’d be surprised if the “whistle blower” came by the information in his complaint lawfully.  In his August 24 letter to the DNI, the IC IG states:

That is all suspect.  On the facts as I understand them, if the “complainant” pumped people with knowledge about the call for information and never himself saw the transcript, then it seems very unlikely that the “Complainant” had the legal clearance and authorization to discuss the specifics of the President’s phone call with Zelensky on 25 July.

In the case of the president’s phone call, you will see that the NSC transcript was classified at its inception as SECRET//ORCON/NOFORN.  What that means is that the document was classified Secret but that its dissemination was further limited beyond mere security clearance.  ORCON meant that “Originator controls dissemination and/or release of the document.”  Thus, irrespective of the level of one’s Security Clearance, you would need to be on the dissemination list to have lawful access to the information contained in that document.

The IC IG claims that the whistle blower had lawful access, but nothing in the IC IG’s August 24 letter supports that bald conclusion.  Everything the “complainant” wrote about the 25 July phone call was based on hearsay from people who presumably had lawful access.  If that is the case, then contrary to the IC IG’s claims, this leak, recast as a “whistle blower complaint,” begins with a violation of, 18 U.S.C. 793(f) which makes it a crime when someone without authorization transmits classified information to someone not authorized to receive the information. Of course, the only way to test that is to identify the “complainant.”

Second, there is the coordination between the “complainant” and Schiff’s staff to conspire to run the allegations through the IG IC.  If you will recall, Schiff lied about there being any contact between the complainant and his staff, only changing his story when the IC IG, who knew of the contact between Schiff and the complainant, was called to testify before Congress.  Schiff admits now that his staffers recommended the complainant file this as a “whistle blower” complaint   Further, the whistle blower never informed the IC IG that he had coordinated with Schiff’s staff.

Next comes the nature of the “whistle blower” complaint.  The whistle blower, on the basis of the 25 July phone call, charged falsely that President Trump was breaking a Campaign Finance law with his July 25 phone call.  So what?  Does the IC IG have jurisdiction over the President of the United States?  And does the IC IG have jurisdiction over matters that are not, as a matter of law, within the DNI’s authority and responsibility?

If the “complainant” believed the President was breaking the law, his option was to refer the matter to the Dept. of Justice per 28 U.S.C. § 535.  Likewise, the IC IG’s responsibility was not to process the complaint, then to report it after a sham investigation as a matter of “urgent concern” to Adam Schiff, but to direct the Complainant to file his Complaint with the Justice Dept.  But it seems that the bad faith goal here, involving Schiff, the whistle blower, and the IC IG, was to have this utterly deficient complaint land in the public eye with the IG’s imprimatur and a finding of urgent concern to jump start a call for impeachment.

Then of course, there’s the IC IG’s decision to forward this complaint to Congress with a finding of “urgent concern” without ever even requesting to review the transcript of the 25 July phone call.  That was the equivalent of a state’s attorney having fingerprints on a murder weapon but not running the prints for identification because it could well derail the prosecution of whomever the state’s attorney wants convicted.  It is a dereliction of duty that is staggering and inexplicable by any reasonable and lawful rationale.  If he had read the letter, there is no possible way the IC IG could have legitimately forwarded that complaint to Adam Schiff with a finding of “urgent concern.”  The only logical conclusion is that the IC IG was part and parcel of a conspiracy to get this “whistle blower complaint” into Adam Schiff’s hands.

There is certainly enough other information in the public domain to call into question the legality involved in both the complaint itself, the machinations that the IC IG went through to turn this complaint into an official finding of “urgent concern.”  These things include:

We need to know the identity of the “whistle blower.”  We need to see a copy of the original complaint that the “whistle blower” submitted to the IC IG.  We need to examine the whistle blower under oath.  And if this is yet one more act of seditious conspiracy by the deep state aimed at producing a coup, then it needs to be charged as such.  We have been in one long impeachment push since before Trump took the oath of office. As Victor Davis Hanson pithily itemized the Democrat’s efforts (h/t Instapundit):

This latest, what Hanson calls “impeachment 2.0,” is a primal scream from the left — a raw will to power. None of this will end until the left is made to play by the same rules as the rest of us.  As good a place as any is to start with unmasking the whistle blower.