An eclectic survey of this day in history 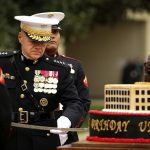 Birthday of the United States Marine Corps, established in 1775 at Tun Tavern in Philadelphia by Samuel Nicholas.

Christian Feast of the Lübeck martyrs, three Catholic and one Lutheran Priest executed on this date in 1943 for their opposition to the Nazis.

Christian Feast of Pope Leo I, one of the most consequential of the early Popes, he is best known for convincing Attila The Hun to turn back from his invasion of Italy.  He died on this date in 461 A.D.

The major challenge to the Western World for the millennium beginning in the 8th century came from a Muslim world bent on conquest and imposing their religion by the sword.  These Muslim armies, from 700 A.D. until their final defeat in 1683 A.D. at the Gates of Vienna, accomplished the largest imperial expansion in all of history.

The Crusades were wars launched by Europe in response.  Most were undertaken with the blessing of — and often at the direction of — the papacy.  Most were aimed directly at driving back the Islamic invaders and rolling back their conquests. The Fourth Crusade started as one such war, in part to drive the Islamists out of Egypt, a country the Arab conquerors had overrun in 642 A.D.  But it ended up being never setting foot in Egypt.  Instead, the leaders of the Crusade began laying siege to and sacking Christian cities for their wealth, including the center of Eastern European Christianity, Constantinople (today known as Istanbul, Turkey).  Pope Innocent III, threatened to excommunicate the leaders of this crusade when, on 10 Nov. 1202, they began a siege of the Christian town of Zara, Croatia.

The Fourth Crusade was a disaster for the West.  It weakened south central European nations and, ironically, made them ripe for further Islamic conquest.

England was a rather weak country in the 16th and early 17th century, and its greatest maritime competitor was the Netherlands, with whom it fought several wars for naval dominance.  The end of the Third Anglo Dutch War and the Treaty of Westminster ratified by the two nations on this date in 1674 had two major ramifications for England and America.  One, the Netherlands ceded their colony of “New Netherlands” to England.  The colony, with its major town in New York City, claimed much of the North eastern United States.  Two, it provided that the English would honor the neutrality of Dutch ports and ships.  This became of critical importance to the American colonies, and then the new United States, as the Dutch operated the tiny Caribbean Island of St. Eustacius free of English interference.  The Dutch turned it into a hub for smuggling tea, molasses and wine prior to the Revolution, then into a hub for smuggling arms and powder to the American patriots once the Revolution started.

1793 – The French Revolution & The War On Christianity

The French Revolution was well underway (and into the bloody Reign of Terror) by 1793, and socialism was its afterbirth.  A central part of that included a war on Christianity.  On this date, as part of that war, French socialists attempted to replace Christianity with a government controlled atheistic cult.  The French Convention proclaimed a Goddess of Reason  as its figurehead.  “The Cult was intended as a civic religion inspired by the works of Rousseau, Quatremère de Quincy, and Jacques-Louis David, it presented “an explicit religion of man.”

Each colony committed to the American Revolution in its own way and in its own time.  SC crossed the Rubicon and fully joined the Revolution in two ways on this date in 1775.  The Revolution of American colonists against the British commenced in Charleston with an American and British exchange of naval gunfire in Charleston Harbor.  A different aspect of the Revolution — that of neighbor on neighbor true civil war — commenced on the same day in the back country of SC.  SC colonists loyal to Britain began a siege of a small Patriot-held fort at a place with the odd name of Ninety Six.

1865 – Major Henry Wirz, the superintendent of a prison camp in Andersonville, Georgia, is hanged on this date for war crimes during the Civil War.

1483 – Martin Luther, German monk and priest, leader of the Protestant Reformation that shook the Western world.

1871 –  Winston Churchill, perhaps the most important consequential figure of Western Civilization in the 20th century.

2009 – John Allen Muhammad, a black separatist motivated by the obscene racism espoused by the Nation of Islam, was executed this day for his “Beltway Sniper” murder spree.