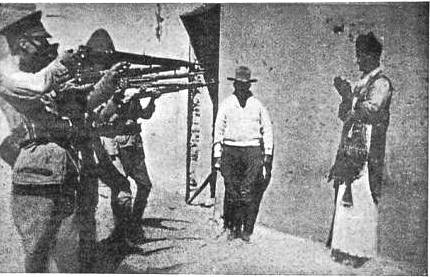 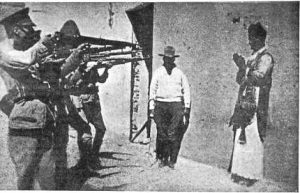 Feast of the Blessed Anacleto González Flores, José Sánchez del Río, and companions (Martyrs of the Cristero War):  After communists rose to power during the Mexican Revolution of 1910 to 1920, one of their major efforts was to drive Catholicism out of the country and to impose atheism.  This resulted in a massive, popular uprising known as the Cristero War.  Thousands of Catholics died in the fighting or were executed by the state.  In 2000, Pope John Paul II cannonized 25 of the faithful who fell in that conflict, the majority of whom were priests executed for carrying out their ministry despite the suppression under the anti-clerical laws of Plutarco Elías Calles.

The Battle of Tarawa began on this date when U.S. Marines conducted an amphibious assault on Tarawa Atoll in the Gilbert Islands.  It was the first U.S. offensive in the central Pacific region and it was the first contested landing.  The Japanese forces on the island were 4,500 strong and in entrenched defenses.

Because of unexpectedly low tides and effective Japanese defenses, the amphibious assault went poorly.  The fighting over three days was intense with the U.S. taking heavy losses.  The battle ended with the U.S. in control of the island, while the fanatical Japanese force was annihilated almost to the last man.  Only 17 Japanese soldiers were taken as prisoners.

The high casualties suffered assaulting but one small island shocked many Americans.  Still, the success set the stage for the Marshalls Campaign some ten weeks later, and lessons learned from the contested landings were put to use.

The first of the Trials against 24 Nazi war criminals convened this date at the Palace of Justice at Nuremberg.  The importance of the trials lies in the due process and trial afforded the accused, as well as the articulation of certain acts, particularly genocide, as violating the Rules of War.  The tried and true historical method of dealing with captured enemy personnel involved in what we today would call war crimes was to summarily execute them, as Churchill, Stalin and Roosevelt wanted to do with the captured Nazi leadership.  American public opinion though was strongly against such summary justice, so the allied commanders opted for trials that would document and expose the Nazi war crimes.

The first 24 men put to trial were senior leaders of the Nazi Party who had been captured alive — but for Martin Bormann who was tried in absentia.  All were found guilty of various crimes.  Twelve were sentenced to prison, the other 12 to the noose.

The model used for the Nuremberg Trials has been adopted into international law.  It is written into several international treaties and conventions and served as a model for the International Criminal Court.

About 200 Wahhabi / Sunni Muslims staged a revolt in Saudi Arabia at the site of the Kaaba in Mecca and took some 6000 hostages. In the end, Saudi officials, with military help from Pakistan, put down the revolt and executed all involved.  But it had lasting ramifications for Saudi Arabia and the world.  The Saud family, notoriously impious and corrupt by the 20th century, tried to buy off the Wahhabists and lit the fuse of Islamic terrorism that we are living with today.  The Saud rulers gave Wahhabi clerics much more power, they turned back what little liberalization there was in the Kingdom, and they began exporting the poisonous Wahhabi religion across the four corners of the world with billions of petro-dollars.  The Sauds have continued this practice to varying degrees ever since.

1820 – An 80-ton sperm whale attacks and sinks the Essex (a whaling ship from Nantucket, Massachusetts) 2,000 miles from the western coast of South America.    The event inspired Herman Melville to write his 1851 novel Moby-Dick)

1889 – Edwin Hubble, an early 20th century astronomer who discovered that many of the objects thought to be mere clouds of dust in the night sky were actually galaxies beyond our own.  Moreover, “Hubble provided evidence that the recessional velocity of a galaxy increases with its distance from the Earth, a property now known as “Hubble’s law“, despite the fact that it had been both proposed and demonstrated observationally two years earlier by [Father] Georges Lemaître. The Hubble–Lemaître law implies that the universe is expanding.”  The Hubble Space Telescope was named in Hubble’s honor. 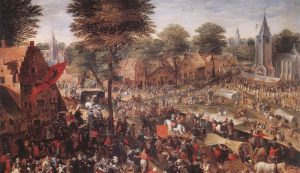 1593 – Hans Bol, an influential Flemish artist famous for his landscape paintings as well as his allegorical and biblical scenes,