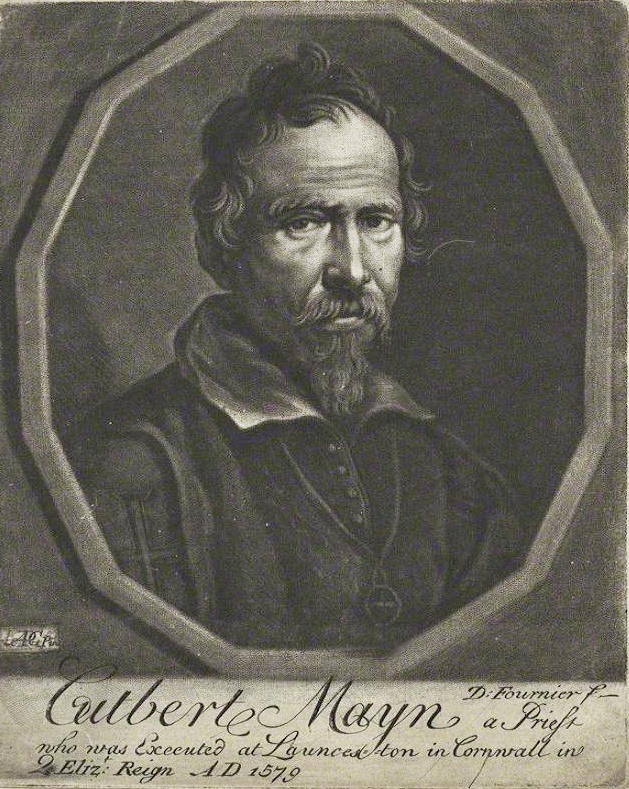 Feast of Father Cuthbert Mayne – one of the Forty Martys of England and Wales, he was the first seminary trained priest to be executed for practicing his faith in Elizabethan England.  He was an English citizen who attended seminary school on the continent.  British hatred of all things popish was at its zenith in England when Father Curthebert, in response to the English reformation, travelled to England to minister to Catholics in hiding.  He was arrested in 1547, charged with high treason for saying mass, and hanged, drawn and quartered.

British mistrust of and hatred of Catholicism was a major part of the Glorious Revolution that, in 1688, overthrew the Catholic King James II.  It even played an important, though indirect role, in the American Revolution.  In 1780, with the Revolution hanging in the balance, Britain experienced several days of violent rioting, The Gordon Riots, after King George III approved of legislation to remove legal disabilities practicing Catholics.  The riots kept reinforcements in Britain and mortally wounded Britain’s efforts to find allies to counter France.

And British hatred of Catholicism traveled to America in every ship that crossed the pond.  Catholicism was the one religion proscribed in twelve of the thirteen colonies.  It wouldn’t be until early in the 19th century that the proscriptions were lifted in the new United States.

Feast of Francis Fasani – was a humble 18th century parish priest in Italy who was beloved by his community.  After his death, when he was being investigated for beatification, one witness opined “He heard the confession of every type of person with the greatest patience and kindness on his face”. He was charitable and welcoming to all, giving as his reason the hope of being able one day to say to the Lord: “I was indulgent, I don’t deny it; but it was You who taught me to be so.”

History and the news are often similar — “if it bleeds, it leads.”  It is nice on occasion to simply recognize someone who lived a principled life caring for the well being of others. 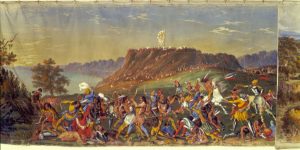 In the early 18th century, the Natchez Indian tribe were a comparatively small tribe of 6,000 located in four villages on the shores of the Mississippi River.  The French first made contact with the Natchez in 1682 as the French were trying to secure the interior of North America from, all the way from Canada to New Orleans.  Initially, relations were friendly, and the Natchez allowed the French to build a small settlement in their lands.  By 1720, the settlement at “Fort Rosalie” was occupied by about 400 French colonists and 200 African slaves.  The Natchez had several conflicts with the French colonists, but the final straw came in 1729 when the the French commander Sieur de Chépart ordered the Natchez to vacate their village of White Apple so that he could use its land for a new tobacco plantation.

On this day in 1729, the Natchez destroyed the French settlement, killing 138 Frenchmen, 35 French women, and 56 children at Fort Rosalie.  French retribution was swift.  By January, 1730, the French and several hundred Choctaw Indian allies began the systematic destruction of the Natchez tribe.  Several hundred of the Natchez sought sanctuary with a British allied tribe to their north, the Chickasaw.

When French forces approached the Chickasaw and demanded that they turn over the Natchez, the Chickasaw refused, setting in motion the Chickasaw Wars.  The Chickasaw won every one of their battles against the French alliance and held to their villages that controlled a portion of the Mississippi River, events that ultimately contributed to the later French defeat in the French Indian War.

1781 – The Zong Massacre & The Abolition Movement

This event, reported in 1781, shocked the conscience of Britain.  It, and the travesty of a trial that followed, firmly established the abolition movement to end slavery in Britain and its possessions.

The slave ship Zong departed from Africa with 442 slaves on 18 August 1781 enroute to Jamaica.  Packed vastly over capacity, disease ran rampant through the slaves and understaffed crew.

The ship and its cargo were insured, but only conditionally.  No claim could be made for loss of slaves who died a natural death aboard the ship or on land prior to being sold.  However, general maritime law allowed insurance claims for any cargo jettisoned into the sea if the captain was acting to save the remainder of the cargo.

When many of the slaves became ill and did not appear as if they would survive, the captain had a total of 142 slaves tossed overboard and left them to drown.  He then made a claim for payment for loss of the slaves on the ship’s insurance policy.

The insurer refused to pay and the owners sued in court.  Amazingly, the jury found for the owners.  Justice Mansfield, who presided over the trial, wrote that he “had no doubt (though it shocks one very much) that the Case of Slaves was the same as if Horses had been thrown over board . . .  The Question was, whether there was not an Absolute Necessity for throwing them over board to save the rest, [and] the Jury were of opinion there was . . .”

The abolitionist Granville Sharp, learning of the case, sought to have the crew tried for murder, but to no avail.  Regardless, he did his utmost to publicize the case throughout Britain, particularly among the clergy.  The abolitionist movement in Britain expanded dramatically in the few years after the Zong Massacre. 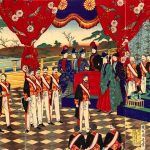 1890 – Japan’s first ever written Constitution, the Meiji Constitution goes into effect in Japan, and the first Diet convenes.  It would remain in effect until 1947, during the post-war occupation of Japan.

1947 – Partition Plan: The United Nations General Assembly approves a plan for the partition of Palestine.  Although accepted by the Jewish State, the plan was rejected by the Arabs who instead began a war to destroy Israel in 1948,

1832 – Louisa May Alcott, American novelist most famous for her book, Little Women.

1895 – Busby Berkeley, famed American choreographer of the 1920’s and 30’s, who took the close order marching drills he learned in the WWI military and applied it to dance numbers in Hollywood musicals.

1330 – Roger Mortimer, a powerful English Lord who led a successful rebellion against King Edward II in the  Despenser War.  He ruled England for 3 years until he was deposed by Edward III.  On this day in 1330, Edward III had Mortimer hanged.

1530 – Cardinal Thomas Wolsey, England’s highest ranking Catholic cleric and de facto Secretary of State under Henry VIII.  Unable to negotiate an annulment of Henry VIII’s marriage to Catherine of Aragon, Wolsey fell from favor.  With Henry VIII, falling from favor, be it minister or wife, was usually a death sentence, with only the preliminaries of a crime awaiting pronouncement.  Wolsey cheated a bit though, dying of natural causes en route to London to stand trial for treason.

1543 – Hans Holbein the Younger, German artist and printmaker who became a portrait artist for the Tudor Court.  His most famous work was a 1537 painting of Henry VIII.

From tomorrow through Christmas, I’ll be posting two Christmas Carols, Hymns or songs and a Christmas album of various artists.  That said, today will be slightly different.  I’ve posted three songs, beginning with the oldest known Christmas songs to the modern era.  And rather than an album, I’ve posted a movie, A Christmas Carol.

The oldest known Christmas Hymn dates to the 2nd century, but it’s melody line has not survived.  The oldest known extant hymn is a poem written by St. Hilary, Bishop of Poitiers sometime before his death in 367 A.D.  that someone than put to a melody.  It was sung as part of Christmas worship in the early Church. Jesu Redemptor Omnium (“Jesus, the Father’s only son”).  You can find a translation of the hymn here.

A millennium after that song, carols and hymns became very popular in the Medieval Church.  This song, Good Christian Men Rejoice, was written in 1328, originally in German and Latin.  Many well known carols date between the 13th and 14th century.

And now, almost a millennium after that, we have popular songs written with a Christmas theme.  Perhaps the most poignant of all is the song “I’ll Be Home For Christmas,” written in 1943 for the hundreds of thousands of U.S. military personnel deploying overseas to war.  It is quite sad to think, as you listen, that over 400,000 of those American military men and women would never make it home for another Christmas.

And there you have the history of Christmas hymns, carols and music.  I’ll spend between this day and Dec. 25 filling in the blanks.

And now, to get in the Christmas Spirit, there is nothing better than watching Charles Dickens’ A Christmas Carol.  And of all the versions, the one I like best is the 1984 version with George C. Scott as Ebeneezer Scrooge.  Fortunately, it is on Youtube.  The quality is middling, but the acting superb.