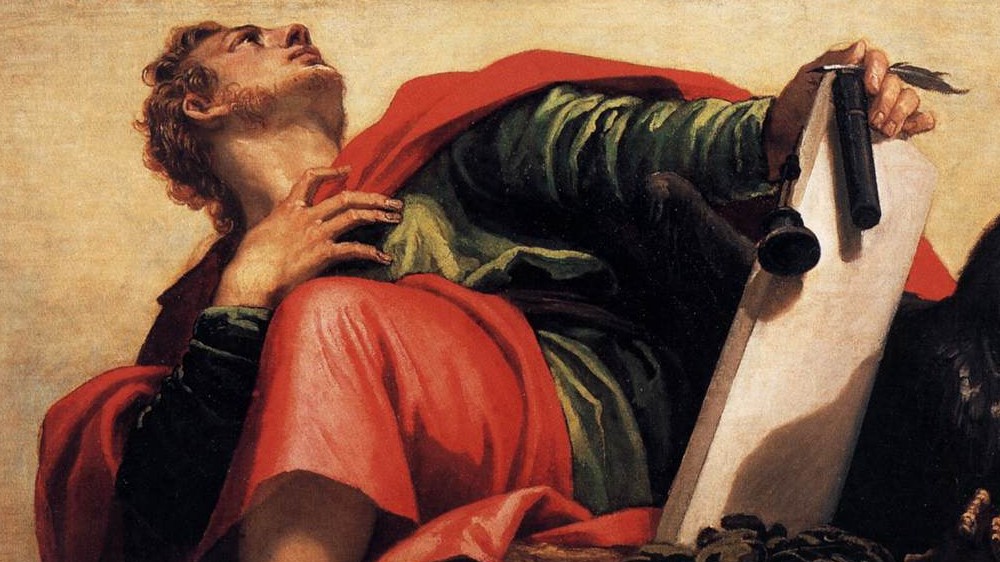 Holidays and Observances on December 27

Today is the Third of the Twelve Days of Christmas

Feast of St. John the Evangelist & The Blessing of the Wine.

Today celebrates the Feast of St. John The Evangelist. And in relation thereto, today is the day to bring your bottle(s) of wine to the Church for the priest’s blessing.

John was a fisherman before he and his brother James answered Christ’s call to become his apostles. John was the only apostle to stay with Jesus during the crucifixion. Afterwards, he joined with St. Peter to spread Christianity throughout Israel. John was later exiled to the island of Patmos where he received visions that he recounted in what is now the final book of the Bible, Revelation. He is also credited as the author of the Gospel of John, and the Johannine Epistles, 1, 2 and 3, though some scholars contest that.

John was unique among the apostles. He alone among them did not die horribly, tortured to death as a martyr for his faith. John died naturally at age 85. That said, there were several attempts made on his life. The most famous was an attempt to poison him that failed when John blessed his wine, drawing out the poison before he could drink it. It is in remembrance of that event that, on the Feast of St. John, people may bring wine to the Church that it be blessed and then consumed in his honor.

John penned some of the most memorable lines of the Bible. For instance, John 1: 1-5:

Today’s Feast was historically a special day of celebration for priests. Do have a happy Feast of St. John The Evangelist and may your wine be blessed.

The Dutch had one colony in North America, New Netherland, which the Dutch East India Company established and ran. A wide variety of people from different nationalities and practicing different religions settled there. One group that did so, in a small town called Vlishing (now Flushing, Queens, New York), was a group of English Quakers to whom the Governor of the colony granted a patent in 1645, assuring them of their religious freedom.

In 1647, a new Governor of the colony took over, Peter Stuyvesant. In 1656, he decided to institute a new policy, proclaiming that the only religion that could be practiced publicly in the colony would be the Dutch Reformed Church. He began persecuting individuals who practiced other religions, including the Quakers in Vlishing.

The people most offended by this were the Dutch colonists living alongside the English Quakers in that small town. On this date in 1757, thirty of these colonists, none of them Quakers, signed the “Flushing Remonstrance” to the Governor, stating in part:

. . . The law of love, peace and liberty in the [Dutch] states [in Europe] extending to Jews, Turks and Egyptians, as they are considered sonnes of Adam, which is the glory of the outward state of Holland, soe love, peace and liberty, extending to all in Christ Jesus, condemns hatred, war and bondage. And because our Saviour sayeth it is impossible but that offences will come, but woe unto him by whom they cometh, our desire is not to offend one of his little ones, in whatsoever form, name or title hee appears in, whether Presbyterian, Independent, Baptist or Quaker, but shall be glad to see anything of God in any of them, desiring to doe unto all men as we desire all men should doe unto us, which is the true law both of Church and State; for our Saviour sayeth this is the law and the prophets.

Therefore if any of these said persons come in love unto us, we cannot in conscience lay violent hands upon them, but give them free egresse and regresse unto our Town, and houses, as God shall persuade our consciences, for we are bounde by the law of God and man to doe good unto all men and evil to noe man. And this is according to the patent and charter of our Towne, given unto us in the name of the States General, which we are not willing to infringe, and violate, but shall houlde to our patent and shall remaine, your humble subjects, the inhabitants of Vlishing.

The small town and the people who signed the remonstrance all paid a price for it, but the only one to recant did so after spending six weeks in solitary confinement on bread and water. In the end, the matter was brought before the Dutch East India Company. Reasoning not from morality but from business pragmatism, the company’s board ordered Stuyvesant to recant his policies of religious persecution. New Netherland needed everyone if it was to prosper economically, not just members of the Dutch Reformed Church.

As Ms. Bookworm put it when I told her this story, they were channeling Milton Friedman. One of the observations of the great economist Milton Friedman and adopted by his student, Thomas Sowell, is that free market economics is the best driver of liberalism.

As Friedman explains in more detail, in his book Capitalism and Freedom, a free market system protects people “from being discriminated against in their economic activities for reasons that are irrelevant to their productivity.” In a competitive free market, he explains, any firm that discriminates on the basis of race, religion, etc., imposes a cost upon itself, and thus the owners would eventually be driven out of business by firms that don’t discriminate. Thus the free market actively works to encourage moral behavior and offers a shield for vulnerable groups in society, and that it is the best and most efficient method of doing so. Or as Thomas Sowell has said more succinctly, the only color in capitalism is green.

History teaches that, the more tyrannical the government, the more it needs three things. One, it needs to disarm its populace. Two, it needs to drive the Judaeo-Christian religions out of the public square, enforcing atheism and allowing the government to insert itself as the dictator of morality. And three, the government needs a scapegoat to blame for all of the problems in the country and all of the negative consequences of its policies. Go to any bloody revolutionary movement since the French Revolution and you will almost inevitably find these three steps. And indeed, the Soviet Union was a classic example.

In October, 1917, communists spouting Marxism and led by Vladimir Ilyich Lenin claimed power. A civil war ensued in which they emerged victorious. One of the first acts of the new communist government was to pass a law requiring everyone other than members of the Communist Party to turn in all of their privately owned weapons. Members of the party could keep one weapon, but it was recorded in the rolls of their party membership.

As to ridding their new nation of Christianity, the communists began that process during their civil war. They imposed state atheism, closed Churches, and murdered well over a thousand Orthodox priests. Individual human life was no longer religiously sacrosanct, but weighed against the needs of the state and Stalin’s paranoia.

Lastly, there were the scapegoats. For Lenin and his successor, Stalin, they were the Kulaks – a middle class of farmers. Lenin started the pogroms rolling:

In November 1917, . . Lenin announced a new policy to eliminate what were believed to be wealthy Soviet peasants, known as “kulaks”: “If the kulaks remain untouched, if we don’t defeat the freeloaders, the czar and the capitalist will inevitably return.” . . . This launched the beginning of a great crusade against grain speculators and kulaks. . . . [By 1918, the Soviets had] confiscated 50 million hectares of kulak land.

But then Lenin died, leaving Stalin in charge of a nation in economic distress. Not surprisingly, the cause of all the problems was the kulaks and other enemies of the state. On this day in 1929, Stalin issued his order to liquidate all of the kulaks as part of his plan to force collectivization of agriculture.

In between the ensuing famine and those murdered outright by their government, Stalin presided over the murder of about 7.5 million people.

Once he was done with the kulaks, other enemies of the state emerged for Stalin to blame for the Soviet Union’s problems and whom he could easily murder. Three years after the Great Famine and the campaign against the kulaks, Stalin announced a Great Purge of all counter-revolutionaries. Two years later, with between 700,000 and 1.3 million citizens murdered by their own government, Stalin finally called off the purge. Purges would continue through Stalin’s death in 1952, but on a much smaller scale.

Stalin and Hitler were about on the same scale as leftist mass murderers of their own citizens. But neither could hold a candle to China’s Mao.

The problem is, once you give government enough power to take away guns, to remove Judaeo-Christianity, to promulgate a new morality and to enforce socialist economic policies, you’ve inevitably given them enough power to act tyrannically and badly when they feel their power is fundamentally threatened. Fortunately, nothing like that could happen in the U.S. No need to worry, so long as we ignore history.

1512 – Cardinal Archbishop Domingo de Mendoza of Seville heard reports of the abuse of the Americas’ Indians and sent a group of Dominican missionaries to Hispaniola to stop the maltreatment. He eventually convinced the Spanish Crown to issue on this day the Laws of Burgos, which governed the conduct of settlers with regard to native Indians in the New World.

1703 – Portugal and England sign the Methuen Treaty which gives preference to Portuguese imported wines into England. Portugese wines, specifically Port and Madeira, would soon become the most popular wines in the American colonies, consumed there in prodigious quantities, though not as much as rum and small beer.

1845 – Ether anesthetic is used for childbirth for the first time by Dr. Crawford Long in Jefferson, Georgia. It should give one pause to think that, for thousands of years, physicians performed surgeries and women gave birth without the use of any anesthetics. One wonders how many surgical patients died of shock alone from the pain of the operation.

1845 – Journalist John L. O’Sullivan, writing in his newspaper the New York Morning News, argues that the United States had the right to claim the entire Oregon Country “by the right of our manifest destiny.” Contrary to what is taught all too often in schools, that was not the driving force behind the expansion of the United States to the West.

1935 – Regina Jonas is ordained as the first female rabbi in the history of Judaism. She died ministering to Jews in Nazi concentration camps.

1945 – Twenty-nine nations sign an agreement creating the International Monetary Fund.It’s work since has drawn a lot of controversy at times.

2007 – Former Pakistani prime minister Benazir Bhutto, the first woman to serve as a Prime Minister in a Muslim majority nation, is assassinated by Muslim terrorists. Al Qaeda claimed responsibility, but the Taliban and Pakistani intelligence were also suspected of involvement.

1571 – Johannes Kepler, German mathematician, astronomer, and astrologer whose work provided a significant portion of the basis for the theories of Isaac Newton. Kelpler, like Newton himself, believed that God had created the world according to an intelligible plan that is accessible through the natural light of reason.

1714 – George Whitefield, English preacher who began the First Great Awakening in America and Britain. Many of the reform movements that arose in America, including the abolition movement and women’s rights movement, as well as evangelical Christianity, have their roots in the work of Whitefield.

2012 – Norman Schwarzkopf, Jr., American general who commanded the coalition military force that drove Iraq out of Kuwait in Gulf War I.

Header credit: Detail of St. John the Evangelist by Veronese, 1555.