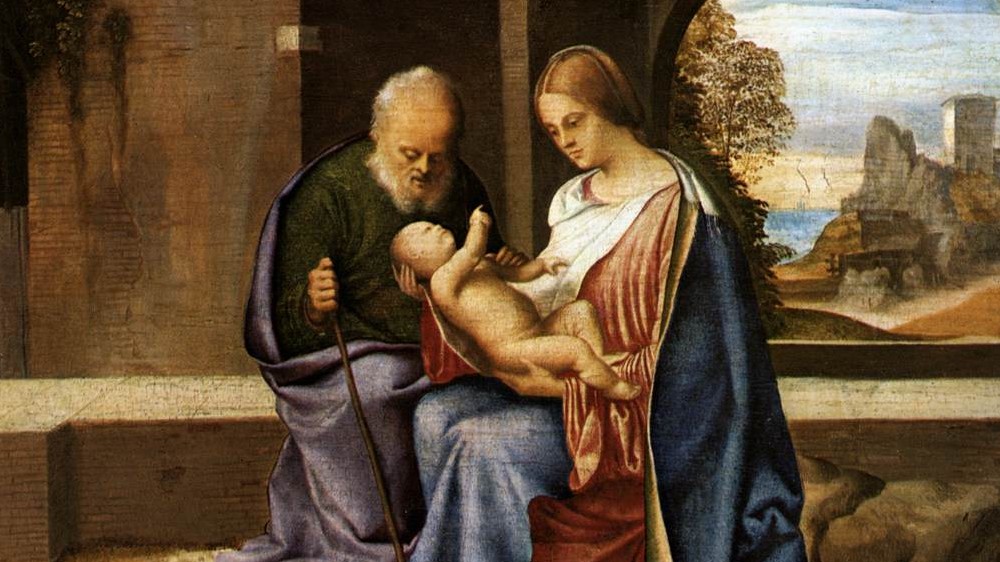 Holidays and Observances on December 29

Today is the 5th Day of Christmas

Feast of the Holy Family

The Feast of the Holy Family is celebrated on the Sunday in between Dec. 25, Christmas, and Jan. 1, the Solemnity of Mary. Only if there is no Sunday during that period is the Feast celebrated on December 30.

The Gospels do not address the family life of Jesus before his ministry in great depth. His parents, Joseph and Mary, were apparently observant Jews, as Luke narrates that they brought Jesus with them on the annual pilgrimage to Jerusalem with other Jewish families. Both Matthew and Luke narrate some episodes in the life of Jesus before his ministry: his circumcision and later Presentation at the Temple, the flight to Egypt, the return to Nazareth, and the Finding of the adolescent Jesus in the Temple.

The Feast of the Holy Family is a celebration in honor of Jesus, his mother, the Blessed Virgin Mary, and his foster father, Saint Joseph, as a family. The primary purpose of this feast is to present the Holy Family as a model for Christian families.

Feast of St. Thomas a’ Becket, a memorial

One of the overarching issues of the Medieval world was where the authority of the Papacy ended and the authority of kings began. It was a dispute that that led to the martyrdom of Thomas a’ Becket, Archbishop of Canterbury, and the humbling of King Henry II before the Church.

Thomas a’ Becket was born into 12th century England. As Chancellor to King Henry II, he came to be a close confidant of the King. He even accompanied the King to war, reportedly acquitting himself well in battle.

In 1161, the King was in a dispute with the papacy and the clerics in England over Royal authority to try any clergy who committed secular crimes in his secular Royal courts. The Papacy claimed sole jurisdiction to try clergy in ecclesiastic Courts. The dispute was still unresolved when the highest ranking cleric in Britain, the Archbishop of Canterbury, died. Henry II convinced Becket to take vows and arranged for his appointment to the position of Archbishop.

Unwillingly, Becket did as he was asked. But then he had an epiphany, and became deeply pious and, to Henry’s discomfort, a defender of papal authority in the dispute. Becket was intransigent, even going so far as to excommunicate other English bishops who supported Henry on the issue. Henry, in a rage, famously asked “Who will rid me of this troublesome priest?” 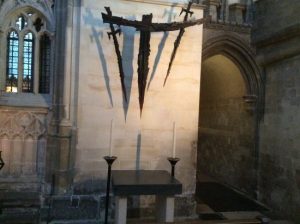 Four of Henry’s knights overheard Henry’s remark and took it upon themselves to do just that. Traveling to Canterbury on this date in 1170, with their weapons in hand, they confronted Becket and demanded he lift the excommunications. When Becket refused, it was soon clear beyond doubt that he would be killed. Moments after Becket “commended himself and the cause of the Church to God, St. Mary, and the blessed martyr St. Denis,” his assassins put him to the sword, spilling his brains on the Cathedral floor.

Much of the medieval world erupted in horror at Becket’s murder and blamed King Henry II. Pilgrimages to Becket’s tomb in Canterbury Cathedral followed soon thereafter with numerous miracles occurring that were attributed to Becket. The Church canonized Becket in 1173. King Henry II to make peace with the papacy, dropped his attempts to try priests in the Royal courts, promised to go on a Crusade, and presented himself at the tomb of Becket to make public penance, allowing himself to be symbolically scourged by the local clerics.

Canterbury became the third most visited site of pilgrimage in all of Europe.

The first great work of literature composed in English, Chaucer’s “Canterbury Tales,” is set against the backdrop of travelers on a pilgrimage to Becket’s shrine. St. Thomas is, today, the patron saint of priests. 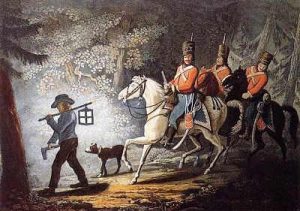 Every strategy Britain had tried in the American Revolution had failed by 1778: a breakout from Boston in 1775, then in 1776, the failed first attempt to capture North and South Carolina, followed immediately by the New York & New Jersey Campaign that saw Washington pull victory from the mouth of certain defeat. In 1777, Howe occupied the major city of the colonies, Philadelphia, but that accomplished nothing. Meanwhile, Gen. Burgoyne had invaded south along the Hudson from Canada, ending in disaster for the British.

The King directed the overall commander of British Forces in the North American colonies, Gen. Clinton, in November of 1778, to see if he could recover the southern colonies of North and South Carolina. It would seem Clinton was not overly enthused about the plan, as he initially only committed 3,000 soldiers to go South. That said, the common belief among the British was that loyalists abounded in the South, waiting only for the British to land in order to scurry like cockroaches out from under their rocks.

The crown jewel of the Southern colonies was Charleston, South Carolina. The colonists had decisively defeated Britain’s first attempt to take the city by naval and amphibious assault in June, 1776. Clinton, not intending to repeat the mistake, needed to take control of the coast south of Charleston so that he could land safely and then, without concerns of being attacked from his southern flank, march on Charleston and conduct a siege from the land.

Britain already controlled Florida. That left the colonists in control of only one major city south of Charleston, that being Savannah, Georgia. Clinton directed his small force to capture Savannah.

The force, under the command of LTC Archibald Campbell, sailed from New York in late November, landing on Tybee Island near the mouth of the Savannah River on December 23. While reconnoitering the city’s defenses, a slave approached the British and offered to guide them through the swamps to a point emerging behind the colonial defenses. Seeing an opportunity if he acted swiftly, Campbell attacked on Dec. 29. Making use of the intelligence from the slave, the British quickly overran the colonial defenders.

The British victory set up what would become the last major British offensive of the war in North America, the Southern Campaign. By its end, more revolutionary war battles would be fought in South Carolina than in any of the other colonies.

Texas won its independence from Mexico in a series of battles culminating in the victory over the Mexican Army at the Battle of San Jacinto in 1836. The new Texas Republic was divided between those who wanted to remain independent and those who wanted to join with the United States. They were pushed towards the latter beginning in 1842, when Mexico renewed offensive operations inside Texas.

The U.S., for its part, by a narrow margin, voted in 1845, to accept Texas as a state if they petitioned the American government to do so. They did so in October and, on this day in 1845, Texas was accepted into the union as the 28th U.S. state.

Mexico had warned the U.S. that annexing Texas would mean war. The U.S. accepted the challenge. The war began in 1846. It ended two years later with an American Army occupying Mexico City.

It is rare in history for a military technological advance to immediately render all before it obsolete. For example, the tank, which replaced cavalry, did not immediately render cavalry obsolete in WWI (even though it was of limited use by then given the deployment of machine guns).

But all naval warships were rendered obsolete the day the British Navy launched the HMS Warrior on this date. It’s combination of screw propeller, iron hull, iron armour, and armed with rifled guns that could fire explosive shells. In one fell swoop, a millennium of wooden sailing ship technology and armament firing solid shot were rendered useless for anything other than providing gunners on the Warrior with a target rich environment.

Ironically, advances in armaments would render the HMS Warrior itself obsolete by 1871. 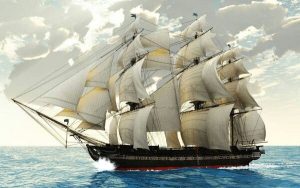 1812 – USS Constitution, under the command of Captain William Bainbridge, captures HMS Java off the coast of Brazil after a three-hour battle. The Constitution would capture four other British warships during the war of 1812. She was nicknamed “Old Ironsides”

1989 – Political dissident, author and playwright Václav Havel, a man sent to prison several times for his opposition to communism, is elected this day the first post-communist President of Czechoslovakia.

1989 – The Nikkei 225 for the Tokyo Stock Exchange hits its all-time intra-day high of 38,957.44 and closing high at 38,915.87, serving as the apex of the Japanese asset price bubble. It would be two more years before the bubble burst, resulting in a “Lost Decade” for Japan.

1998 – Leaders of the Khmer Rouge apologize for the 1970s genocide in Cambodia that claimed over one million lives. I believe the exact translation of their apology was “Communist omelet, eggs . . . you know how it goes.”

2006 – UK settles its Anglo-American loan, post-WWII loan debt. After the last payment was made on the lend-lease program in 2006, the British Economic Secretary formally thanked the U.S. for their wartime support of Britain. 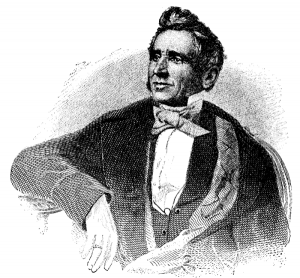 1800 – Charles Goodyear, a self-taught chemist who patented the process of “vulcanizing” rubber.

1808 – Andrew Johnson, a North Carolina Democrat who ran as Vice President for Lincoln on a unity party platform in 1864. He became President after Lincoln was assassinated and clashed with Congress over how to accomplish reconstruction. He narrowly avoided being removed by the impeachment process.

1809 – William Ewart Gladstone, who spent 60 years in British politics and government, serving 12 years as Prime Minister of the United Kingdom. To his supporters, he was the G-O-M, the Grand Old Man of politics. According to his political rival, Benjamin Disraeli, GOM stood for God’s Only Mistake.

1689 – Thomas Sydenham, the “Father of English Medicine,” is remembered as one of the founders of clinical medicine and epidemiology. The textbook he authored, Observationes Medicae, was in use for two centuries.