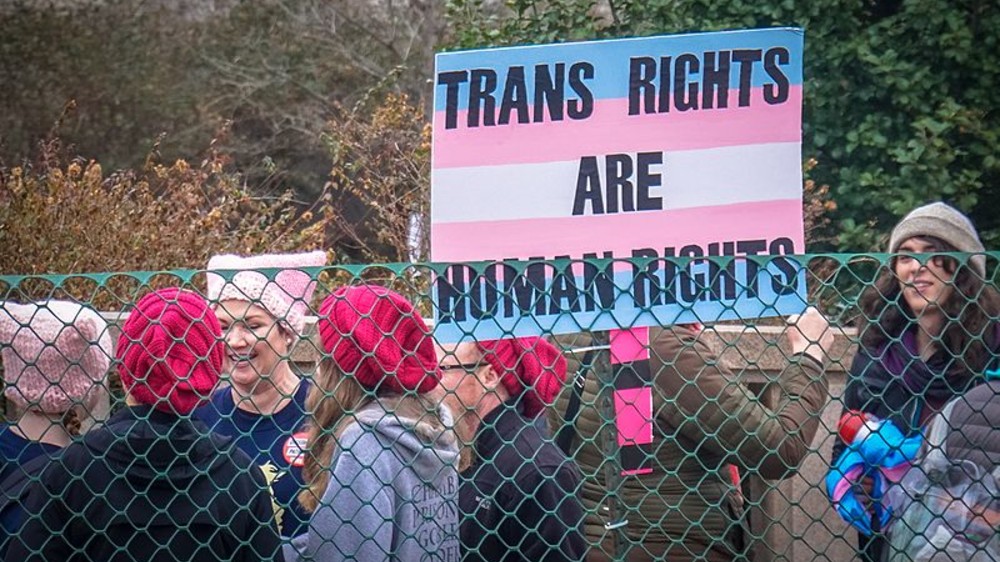 There is a grave danger that, if our media gets us to believe the big lie behind the transgender movement, it can get us to believe anything.

Nazi theory indeed specifically denies that such a thing as “the truth” exists. … The implied objective of this line of thought is a nightmare world in which the Leader, or some ruling clique, controls not only the future but the past. If the Leader says of such and such an event, “It never happened” – well, it never happened. If he says that two and two are five – well, two and two are five. This prospect frightens me much more than bombs.

George Orwell wrote those words in 1943, in his essay, Looking Back on the Spanish War. Here in America, we’ve always assumed that our First Amendment will protect us from a government telling us manifest lies. So far, we’ve been correct.

We know that the government routinely lies to us, but we also are reasonably certain that it does not tell lies that pervert objectivity reality. The lies it tells us are lies about information solely within its purview. Over the decades, these lies have been about war, about employment, about crimes whether real or imagined, and about other things we cannot grasp.

However, for the first time in my lifetime, we are being subjected to Orwellian lies of the type that insist that reality is not real. I speak, of course, of the media’s incessant drumbeat telling us that biological gender is meaningless and that people’s sex is determined by their feelings. They tell us that there are such things as “transgender women,” meaning men who, through belief and helped along by medicine and surgery, have magically become women. And of course, there are “transgender men,” who are women who have done the same, only wishing themselves into being men.

I’ve blogged a lot about the insanity of all this, most recently about a British employment judge who determined as a matter of law that the law had determined that all these fantasies were real. And no, I did not make a typo in that last sentence (i.e., “determined as a matter of law that the law….”) That’s precisely what happened. The judge held that, because British law recognizes transgenderism, that means those who claimed to have transitioned have actually changed their sex. Moreover, because Britain has no First Amendment, people who argued that the “law is a ass,” and cannot change biology by fiat, must keep their mouths shut or suffer the consequences.

In Canada, another country without a First Amendment, the government added those claiming to be “transgender” to its list of protected people. Jordan Peterson rose to fame because he called out a law that had the potential to force him to pretend that people could magically change their gender or to face criminal consequences if he refused to accept that 2+2=5. So far, no one has been prosecuted under the law, but it remains out there, a threat to speech.

It’s scary to think that both Orwell’s home country and one of Britain’s commonwealth countries have pulled a Big Brother. Moreover, both did it very cleverly, using a civilized people’s desire to be sympathetic and kind as a lever to force people into thinking things that simply aren’t true. Being ugly about it wouldn’t have worked. Both modern-day Brits and Canadians, who do have a history of freedom of speech, might have balked if they’d been told that Chinese people are not people at all but are, in fact, a type of potato. That would have been a cognitive bridge too far.

Homosexuality does not force us to deny biology. Homosexual men are still men and homosexual women are still women. Their differences are behavioral. Whether they were born that way or environmental influences changed them, the end result is still the some: Homosexuals prefer non-procreative sex with their own sex.

Once upon a time, Western society considered homosexuality taboo to the point of killing gays and lesbians for their behavior. (Muslim society still does.) Thankfully, we have realized that in a free society, it is not the government’s job to tell people with whom they may have sex or how it should be done. Moreover, also not the government’s job to engage in or support discrimination against people who make these behavioral choices. As government goes, so goes society as a whole, and vice versa. In the West, homosexuals are just plain folks, like everyone else, both at law and in society at large.

As someone committed to individual liberty, I don’t mind if people claim to be the opposite sex, or a camel or a Martian. Let people deny their reality if they’re not a threat to others or committing any core criminal laws (murder, robbery, etc.). That’s what living in a free country is all about. But I’m not free if the government forces me to accept that 2+2=5 and that men and women can magically switch sex.

Sadly, in both England and Canada people are waking up to discover they’re not free. Now that the Brits have accepted homosexual behavior, an acceptance that is right and proper in a free society, their governments have used that acceptance to tell them they must in future disbelieve both their eyes and the most fundamental basics of science (who we are and what’s in our underpants). In lieu of the real world, they must agree with what is nothing more than a government lie — or face severe consequences.

Of course, that can’t happen here, right? We have a First Amendment.

Yes, we do. Our government cannot force us to say that women are men and men are women just on their say-so.

Unfortunately, we also have a media that is out-Pravda-ing Pravda. (For those too young to remember, Pravda is the Russian word for “truth.” It was also the name of the Soviet government’s newspaper, which was known for being anything but truthful.)

And with that, finally, I’m getting to what triggered this outburst on my part. The latest volley in the media’s constant effort to get us to deny reality and accept that 2+2=5 is a tear-jerking article, in what once was a premier American media outlet, telling us about the suffering of women who have periods. Wait. I misspoke. It’s not about the fact that, since the dawn of humankind, periods have been a pain in the tuchis.

Instead, the article is about the psychic suffering of women who think they’re men but, in relentless fealty to biological reality, still have periods. That’s how we end up with this, from NBC, which once upon a time was a reputable outlet that tried to report real news:

When transgender model and activist Kenny Ethan Jones experienced his first period, he faced both physical and psychological pain. Initially, Jones, who had not yet come out as trans at the time, felt like he was losing control and didn’t understand what was happening to his body. However, one thing was clear: He didn’t feel like himself.

“I didn’t believe that having periods would be a part of my lived experience,” Jones told NBC News. “I felt isolated; everything about periods was tailored to girls, yet me, a boy, was experiencing this and nothing in the world documented that.”

He currently experiences a wide range of challenges with his monthly bleeding, especially when it comes to getting his hands on menstrual hygiene products.

“Having a period already causes me a lot of [gender] dysphoria, but this dysphoria becomes heightened when I have to shop for a product that is labeled as ‘women’s health’ and in most cases, is pretty and pink,” Jones explained.

Speaking as an actual woman who knows she’s a woman, we all have a wide range of challenges when it comes to our periods. They are painful, messy, inconvenient, and they can make our body seem like a bloated, cranky, stranger. You’re not different, Kenny, you just think you are.

The real horror for Kenny, though, is that the companies who make tampons, pads, and other products for menstruation, keep marketing them as if their customer base is . . . get this . . . female:

Some transgender and gender-nonconforming people who menstruate, like Jones, say when the products are categorized as women’s products, they can feel alienated — and may even avoid purchasing them altogether.

(Hint to Kenny: Real men buy menstrual products all the time for their wives, girlfriends, and daughters. If you think you’re a man, it’s time for you to act like one.)

The same women who believe they’re men also believe that they deserve special price breaks on menstrual products . . .because they’re not really women. They’re just men who every month have a period just like women:

The hurdles some trans men and gender-nonconforming people who menstruate say they face include the high cost of period supplies….

The article goes on and on and on after this, saying it’s unfair that women have to pay for menstrual supplies when men don’t (except for fake men, who do, if you follow the illogical hurdles attendant on the transgender movement).

Regarding the menstrual supplies, here’s a little tip: In a pre-modern era, before corporate ingenuity and investments made it so much easier for women to handle their periods, women used rags. Rags are extremely cheap and always available. No one is making women pay for the more sophisticated products. In a free market, they buy these products because they want to.

What the article demonstrates is the fact that our media is relentlessly using the transgender movement to force Americans to believe that 2+2=5 and that mentally ill or hormonally imbalanced people can proclaim themselves to be of the opposite sex and then, in fact, actually be of the opposite sex. Once the media has us believing that, what else will they have us believe?

Oh, I know. Perhaps they’ll have us believe that, when Iran shot down a passenger jet flying out of Tehran airport, Donald Trump was responsible for the 176 innocent people who died. What’s sad is that, even in Iran, a tyrannical nation in which lies are government currency, the people aren’t buying that story.