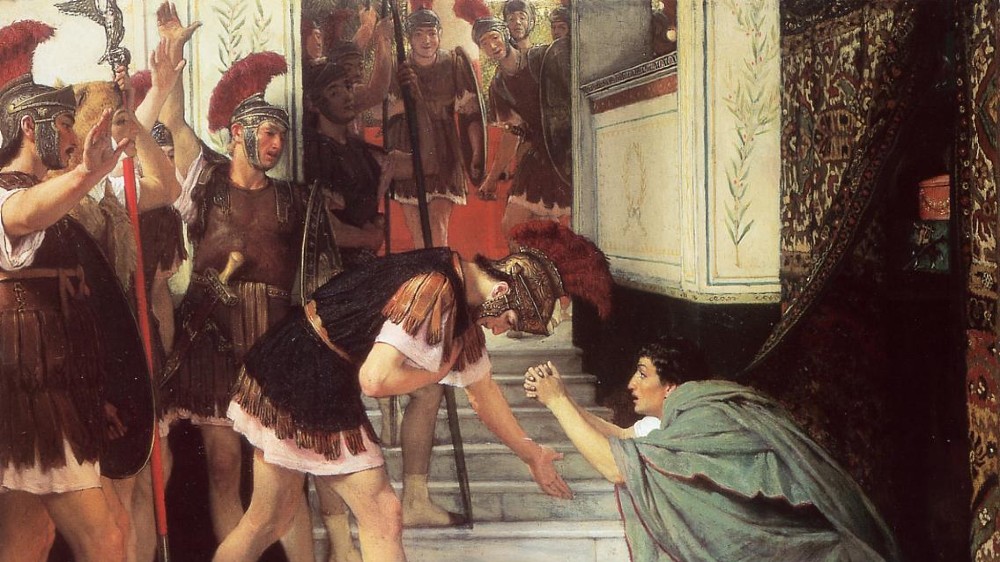 Holidays and Observances on January 24 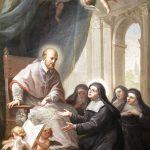 Feast of St. Francis de Sales, 17th century Bishop of Geneva and Doctor of the Church. At the height of the Reformation, St. Francis de Sales was noted for his piety and his “gentle approach” to the religious divisions. He was author of numerous works, perhaps most notably his the Treatise on the Love of God. He is the patron saint of authors and journalists. 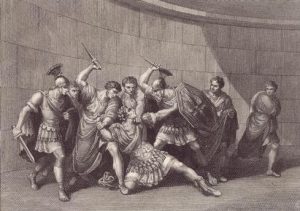 Augustus Caesar, in 40 B.C., before becoming the first Roman Emperor, established a small, permanent unit, the Praetorian Guard, as his personal bodyguard. Over time, the Guard grew in numbers and importance. By 40 A.D., during the reign of the Emperor Caligula, the Praetorian Guard was nearly 5,000 strong, a force unto itself.

Caligula’s misrule was legend, though that was only partly to blame for his murder. The final straw was angering one of the leaders of the Guard, Cassius Chaerea, who, having had enough, led his soldiers to assassinate Caligula. Interestingly, though, they did not do it with the intent of seating Claudius (who turned out to be a very successful emperor).

[T]he Praetorians . . . discovered Claudius, uncle of Caligula, hidden behind a curtain. Needing an emperor to justify their own existence, they brought him forth to the Praetorian camp and proclaimed him emperor. He is the first emperor proclaimed by the Praetorian Guard and compensated the guard with a prime bonus worth five years their salary.

With this act, the Praetorian Guard became a significant player in the politics of Rome until finally being disbanded by the Emperor Constantine the Great in the 4th century.

Attorney General William Barr has suggested that top officials in the Obama Administration behaved like a “Praetorian Guard” in their unprecedented and possibly criminal investigation into Donald Trump’s presidential campaign.

“Republics have fallen because of a Praetorian Guard mentality where government officials get very arrogant, they identify the national interest with their own political preferences and they feel that anyone who has a different opinion, you know, is somehow an enemy of the state,” Barr told CBS News reporter Jan Crawford in May.

Near the same time, classicist Victor Davis Hanson wrote at the Hoover Institution, comparing Donald Trump to the Emperor Claudius, both for the derision directed at Trump by his detractors and the consequential nature of Trump’s time in office.

The divide between Sunni and Shia Muslims has deep historic roots. It arises out of a dispute over who was the rightful leader of Islam after the death of Mohammed .

After the death of Mohammad in 632 A.D., the leadership divided over who, among Mohammad’s four closest companions, should become the new leader of the Islamic movement. Those who favored maintaining the bloodline of Mohammed favored Ali, Mohammed’s son-in-law. They lost, however, to the majority who favored Abu Bakr. Two others would be chosen to lead the Caliphate before Ali was finally chosen.

Those first four Caliphs are known in Sunni Islam as the “Rightly Guided” Caliphs – in phonetic Arabic, it is known as the Rashidun Caliphate. That said, for the Shia Islamists, the first three leaders do not count as legitimate, only Ali.

A civil war had began within Islam for leadership of the Islamic community during the reign of the third of Rashidun Caliphate, the First Fitna War, and continued under Ali. But then Ali was assassinated on this date in 661 as he was praying in the mosque in Kufa. The majority of Muslims – the Sunni branch – recognized the winner of the First Fitna War as the new Caliph. The minority who retained their belief that only those of the blood of Mohammad could be rightful leaders of the faith proclaimed Ali’s oldest son, Hassan ibn Ali, to be the new Caliph. The split between Sunni and Shia became permanently enshrined from this date.

While the peace treaty ending the Mexican American War would not be signed for another two weeks, California was already a de facto territory of the United States on this date in 1848, when the news of James Marshall’s discovery of gold was made public. The news set off a stampede. Within months, three hundred thousand people converged on California from all over the U.S. and abroad. The sudden influx of gold and the mass of economic activity significantly improved the economy nationally.

San Francisco grew from a small settlement of about 200 residents in 1846 to a boomtown of about 36,000 by 1852. Roads, churches, schools and other towns were built throughout California. In 1849 a state constitution was written. The new constitution was adopted by referendum vote, and the future state’s interim first governor and legislature were chosen. In September 1850, California became a state.

Estimates are that 370 tons of gold were extracted from the earth within the first five years of the gold rush. Some miners became wealthy. Most did not. The ones who really cleaned up were the retailers.

1438 – The Conciliar Movement in the Catholic Church began as a reform movement in the 14th century. The movement emerged in response to the Western Schism between rival popes in Rome and Avignon. The main thrust of the movement was the claim that ecumenical councils were the supreme authority of the Church rather than the papacy. The movement reached its apex on this day when the the attendees at the Council of Basel declared the Pope, Eugene IV, excommunicated.

1458 – Matthias Corvinus, a very consequential figure who began his 32 year reign as King of Hungary on this day. He established a professional standing army, successfully defended against the Muslim Ottoman Empire, established a bureaucracy based on merit, patronized the arts and sciences, and reformed Hungary’s legal system.

1679 – England elected an overwhelmingly Royalist Parliament in 1661. King Charles II found this so-called “Cavalier Parliament” so favorable that he kept it in session as long as possible until, on this day in 1679, after 18 years, dissatisfied members of Parliament forced the King to dissolve the Cavalier Parliament and call for new elections.

1908 – The first Boy Scout troop is organized in England by Robert Baden-Powell to familiarize increasingly urban children with fieldcraft. I am not sure what they are now, or how much longer the organization will still be around.

1946 – The United Nations General Assembly passes its first resolution to establish the United Nations Atomic Energy Commission. It was an effort to put the nuclear genie back into the bottle. It failed.

1961 – A bomber carrying two H-bombs breaks up in mid-air over North Carolina in what became known as the Goldsboro B-52 crash. The uranium core of one weapon remains lost. Both bombs came very near detonation.

1972 – Japanese Sgt. Shoichi Yokoi is found hiding in a Guam jungle, where he had been since the end of World War II. He had first gone into hiding when the Marines captured Guam in 1943.

1978 – Soviet satellite Kosmos 954, with a nuclear reactor on board, burns up in Earth’s atmosphere, scattering radioactive debris over Canada’s Northwest Territories. Only 1% is recovered. The Soviet Union also had two other nuclear powered satellites that failed and fell to earth.

1989 – Notorious serial killer Ted Bundy, with over 30 known victims, was given his very last job at the Florida State Prison this day. Conductor. 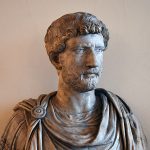 AD 76 – Hadrian, who rose to become one of Rome’s few Emperor’s who was uninterested in conquest. He concentrated on consolidating the Empire and stabilizing its borders. His most famous work still standing, more or less, is Hadrian’s wall that cuts across the north of England, designed to protect the Romano-British from the depredations of the hagis-eaters.

1712 – Frederick the Great, the finest battlefield general of the mid-18th century, as well as the most liberal ruler of the era.

He modernized the Prussian bureaucracy and civil service and pursued religious policies throughout his realm that ranged from tolerance to segregation. He reformed the judicial system and made it possible for men not of noble status to become judges and senior bureaucrats. Frederick also encouraged immigrants of various nationalities and faiths to come to Prussia, . . . Frederick supported arts and philosophers he favored as well as allowing complete freedom of the press and literature.

1749 – Charles James Fox, one of Britain’s more colorful politicians during a period that produced a surplus of them. Fox, as a member of Parliament, was a staunch supporter of America during the Revolution and an implacable opponent of King George III.

1941 – Neil Diamond, one of the bestselling pop singers of the late 21st century. He has sold over 100 million records over the course of his career.

1943 – Sharon Tate, a promising actress and wife to Roman Polanski. She was butchered in 1969 by the Manson family in what became known as the Tate-LaBianca Murders. 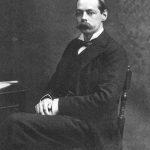 1895 – Lord Randolph Churchill, a British politician and radical Tory. His bright future in politics was cut short by miscalculation and his life cut short by syphilis. His more famous son, Winston, would die on the same day, seventy years after his father’s passing.

1965 – Winston Churchill, probably the most consequential figure of Western Civilization during the 20th century. He was one of the most judicious and prescient men ever to hold office. He argued against the punitive measures that gave rise to Hitler. He saw the danger of the Bolsheviks during the Russian Revolution and wanted to war against them. He argued for rearming Britain and challenging Hitler in the 1930’s when WW II might have been avoided. And he was an enemy of the socialism of Clement Attlee imposed on Britain after WW II.

1986 – L. Ron Hubbard, American religious leader and author, founded the Church of Scientology. It is a religion explained in about a minute by South Park.

1993 – Thurgood Marshall, Supreme Court Justice from 1967 to 1991 where he and Justice Brennan proved the most progressive members of the court. Before that, he founded the NAACP Legal Defense and Education Fund, most famously arguing before the Supreme Court Brown v. Board of Education, challenging segregation in schools.