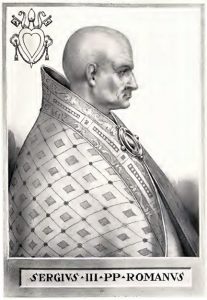 904 – Sergius III is consecrated pope, after coming out of retirement to take over the papacy from the deposed antipope Christopher. Murder, fathering children out of wedlock, etc., . . . Pope Sergius is not fondly remembered in the papal history books.

1258 – Mongolian mounted warfare proved largely unstoppable when Ghengis Khan unleashed it upon the world. At their height, the Mongolian hordes were rarely defeated in open field warfare. One such rare defeat came in 1258 in fighting around Hanoi. Days earlier, the Mongols had defeat Đại Việt in battle, after which Viet and much of his army escaped and the Mongols, who were intent on invading Southern China, did not follow up. On this date, Đại Việt returned and executed a night attack on the Mongols in their camps, known as the battle of Đông Bộ Đầu. They devastated the Mongol Army, forcing them out of Viet kingdom.

1814 – In the Napoleonic War of the Sixth Coalition, Napoleon led an army to defeat a combined force of Russia and Prussia this day in the Battle of Brienne, but failed to cripple the army before they could link up with an Austrian Army. Napoleon’s days were numbered. In a little over a month, the Coalition forces would be in Paris and Napoleon deposed, on his way to Elba.

1861 – Kansas, the 34th U.S. state, had been a pre-civil war battleground for forces supporting slavery and those opposed to it. On this date, Kansas was admitted as a “free” state to the union.

1863 – After “years of skirmishes and food raids” by Shoshone Indians, a detachment of California Volunteers led by Colonel Patrick Edward Connor attack the main Shoshone village at Bear River in what became known as the Bear River Massacre.

1907 – Charles Curtis of Kansas becomes the first Native American U.S. Senator. He would eventually be elected the Republican’s Senate Majority Leader and serve as Vice President of the U.S.

1991 – The Battle of Khafji, an Iraqi offensive beginning this day, was the first major ground engagement of the Gulf War, as well as its deadliest. The Iraqi forces were mauled by air power and, while one unit managed to occupy the Saudi town of Khafji, it was driven out in a Saudi led counterattack the next day.

2002 – In his State of the Union address after the 9-11 terrorist attack, President George W. Bush describes “regimes that sponsor terror” as an Axis of evil, in which he includes Iraq, Iran and North Korea.

2009 – Democrat Governor of Illinois Rod Blagojevich is removed from office following his conviction of several corruption charges, including the alleged solicitation of personal benefit in exchange for an appointment to the United States Senate as a replacement for then-U.S. President-elect Barack Obama.

1717 – Jeffery Amherst, who was appointed as the overall commander of British Forces in North America during the French and Indian War. While he was successful in the war, his actions contributed to Pontiac’s Rebellion. During the American Revolution, he was offered command of British forces in North America but refused because he thought a much larger force would be necessary to win the war. He is most remembered today among the wokeratti for having approved spreading small pox among the Indians as a form of biological warfare.

1737 – Thomas Paine, America’s most radical Founding Father. He gained prominenance in colonies for publishing Common Sense (1776), but he became much less fondly looked upon in later years when he went to France and espoused radicalism and atheism.

1843 – William McKinley, successful Republican President of the United States who led the U.S. to victory in the Spanish-American War, promoted U.S. industry, and kept the U.S. on the gold standard. He was assassinated six months into his second term in office, then succeeded by his VP, Teddy Roosevelt.

1880 – W. C. Fields, one of the most popular comedian, of the early 20th century. His on-screen persona was that of a hard drinking egotist who hated children and dogs. Only the former was true, and in the end his drinking caught up with him.

1820 – King George III, he was unique for the time. He was a good father and devoted to his wife during an era were licentiousness was the norm. Other than losing the American colonies, his reign is remembered as being a very successful one. By 1810, the King had gone insane, perhaps due to porphyria, and his son rule as Prince Regent during the final ten years of his father’s life.

1928 – Douglas Haig, who would rise to command the British military during WW I. His battlefield tactics were not up with the newer and deadlier weapons of war deployed during the war. “The Canadian War Museum comments, ‘His epic but costly offensives at the Somme (1916) and Passchendaele (1917) have become nearly synonymous with the carnage and futility of First World War battles.’”

1956 – H. L. Mencken, a journalist, he was a cynic, a rabid racist, and an aggressive atheist, all of which made Mencken was a popular figure in the first half of the 20th century.