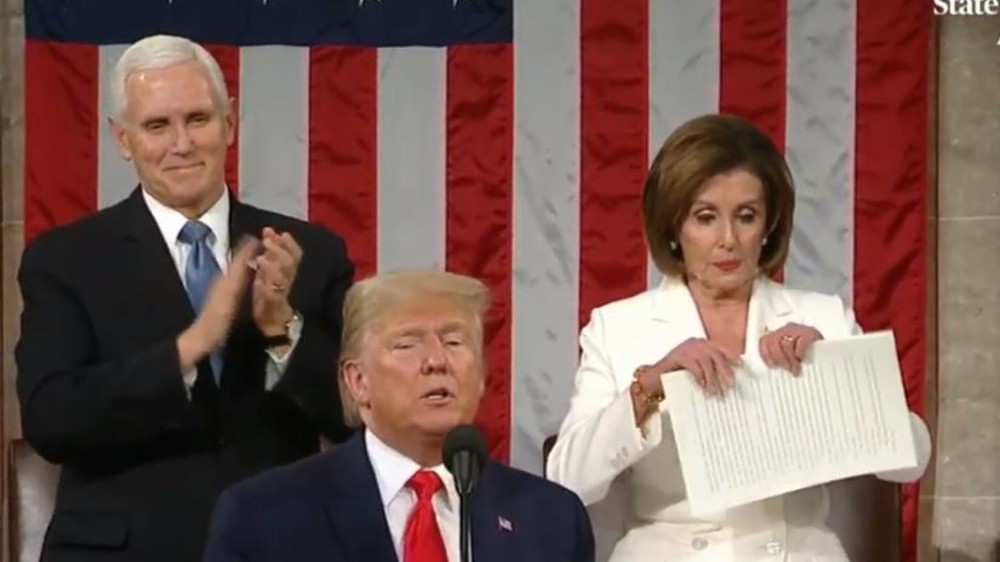 Last night was not a normal state of the union speech.  It was the opening of Trump’s reelection campaign for 2020.  On one hand were Trump’s laundry list of accomplishments.  On the other were the failures of progressive policies, few of which Trump left unskewered, and in particular the economic and regulatory policies of the “past administration.”  Along the way, Trump threw red meat to conservatives on the 2nd Amendment, abortion and religion; he took more than a few swings at left wing shibboleths, such as late term abortion and sanctuary cities.

One can rate how well Trump has done by the degree to which he drives the left into fits of insanity. By the end, he had Crazy Nancy acting out like a two year old.

President Trump’s speech worked on several levels last night.  He had much to crow about as to the economy.

And those were just the points directly on the economy itself.  There were countless other points on things such as the Second Chance Act, regulatory reform, etc.  Trump has a very long list of accomplishments to run on, and he mentioned most of them.

And throughout the speech, Trump made very effective use of guests in the gallery to highlight the points he wanted to make to America.  There was the Medal of Freedom to Rush Limbaugh, the now cancer striken man who helped guide and grow the modern conservative movement.  There was a single mother with her daughter who has been on a wait list for school choice for years in Pennsylvania, where the Democrat governor recently vetoed any expansion of the school choice program.  There was a vet who benefited from the Second Chance Act  There were the parents of Kayla Mueller, whose daughter was kept as a sex slave for years before being murdered by the now recently executed al Baghdadi.  There were the wife and child of an American soldier killed by Iran’s Soleimani.  And lastly, in a feel-good moment, there was the last surviving Tuscegee Airman, 100 year old Gen. Charles McGhee and his great grandson who wants to join the Space Force.

It all proved too much for the Speaker of the House Nancy Pelosi.  At the end of the speech, she stood behind the President and began tearing up his speech, demonstrating an incredible breech of decorum and the sputtering, impotent rage of the progressive left for President Trump.  That was not the act of a leader of this country in control of her emotions, it was the act of a toddler that I expect many independents to find shocking.