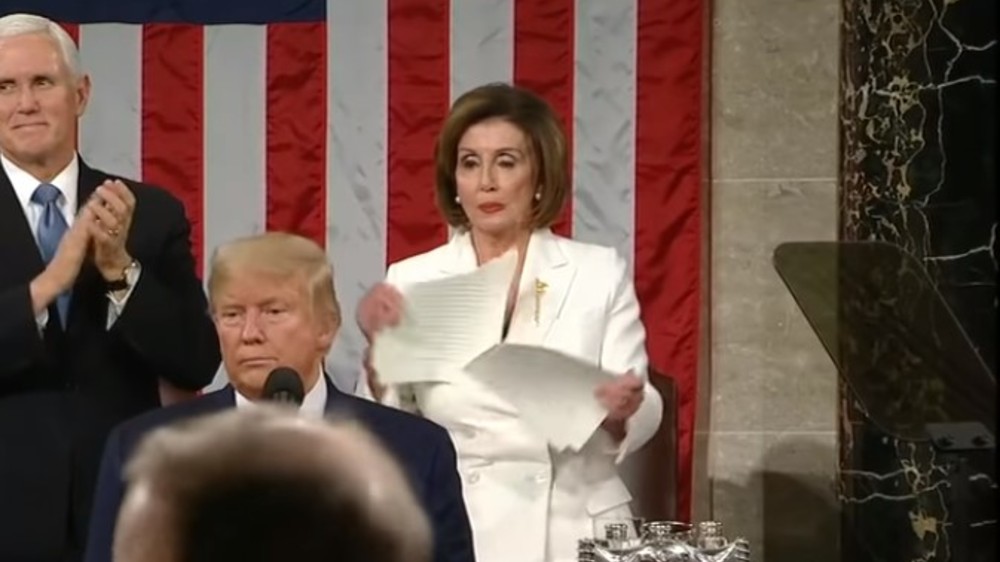 The backdrop to Trump’s superb speech about America’s greatness was the malignantly narcissistic Dems indulging in an extended adolescent temper tantrum.

I enjoyed Trump’s speech because it was a magnificent statement about America becoming a nation that benefits not the 1% but the 99%. In a funny way, Trump is the real “Occupy Movement,” because his policies, by taking the regulatory yoke off American necks, unleashed American energy, innovation, and creativity — and the 99% did the rest. Trump is not a plutocrat or an oligarch; he is the answer to the plutocracy and oligarchy of the Obama era, a time during which we saw an almost fascistic fusion between government and big money.

I enjoyed Trump’s speech because, despite his subdued affect (I prefer him in rip-roaring stump-speech mode), he is a showman and knows how to entertain. His guests didn’t just illustrate his political points; his guests got something for showing up, such as private school admissions or husbands home from war. The most moving moment for me was Rush Limbaugh’s face when he received that well-deserved Medal of Freedom (starting at 1:38).

Rush Limbaugh has advanced lung cancer.
A bad, bad diagnosis.
Trump brought Rush to the State of the Union.
Rush was honored & given multiple standing O’s.
Melania give him the Medal of Freedom ON THE SPOT.
No other Republican would have the balls to do this.
Why I support Trump: pic.twitter.com/lpKT5SI7nJ

It’s hard for me to imagine someone who, through humor, wit, intelligence, and a staggering fund of knowledge, has done more to revitalize and keep alive the true American constitutional spirit than Rush has. I wish Rush many more years of health and happiness, but it is something to know that, at a minimum, he lasted long enough to see his work come to fruition. While he’s always harked back to “Ronaldus Magnus,” now he has experienced “Donaldus Magnus” and knows that, as Trump said, “the best is yet to come.”

And lastly, I enjoyed Trump’s speech because it was absolutely wonderful watching the angry, petty, anti-American Democrats impotently fuming as Trump reeled off success after success — for all Americans — in the same country that they insist is a sterile, hate-filled, broken dystopia. From the first minute of the speech, I was riveted by Nancy’s theatrics. As she frowned, riffled through papers, mimed words, sucked her dentures, waved to people in the crowd, I laughed. She was the exact equivalent of an angry teenager forced by her parents to do something against her will and getting her revenge in as petty a way as possible. Her theatrically ripping up the speech at the end of the evening was the perfect drama queen moment of a frustrated 15-year-old girl denied an evening at the mall with her friends.

In the same way, the Democrats seated in the audience who refused to rise as Trump touted how well America and Americans are doing, were also utterly adolescent. They were going to cut off their collective noses out of spite if it killed them. There they all were, making a grand point about their disapproval for the utterly evil man who . . . ran concentration camps? No. Sent people to gulags? No. Cast gays in prison or hanged them? No. None of that.

They radiated hatred for a man who brought employment to more Americans than ever, especially women and minorities; who raised wages in unheard of fashion, especially for women, minorities, and veterans; who literally released blacks from their chains in prison; who brought manufacturing back to America; who turned the stock market into a dynamo, not reflecting rich people parking their wealth in an unreliable, over-regulated economy, but reflecting real American growth; who made America energy independent; who stared down mullahs and Maduros; and who did all the other stuff that’s been fantastic for America and great for the world.

As Trump recited one benefit after another that the American people have experienced over the last three years, the Democrats made plain with their unmoving bodies and grim, petulant faces that they hated that stuff, every bit of it. In their quest for power, they want a failing, desolate, divided America. It’s one thing for them to sit stony-faced when Trump boasts about his specific acts or plans; it’s another thing entirely to sit stony-faced as Trump boasts about the country they’re supposed to be working for.

Anyone who has raised teenagers (or, heck, been a teenager himself) recognized what was fueling the Democrats: This was the narcissistic rage one sees in someone both immature and powerless. Trump was the adult in the room and the Democrats were the sullen 14-year-olds, powerless within the confines of their House, and using the only weapon at hand — bad behavior to convey their utter disdain for the parent refusing to allow them to engage in their self-defeating, often dangerous conduct.

The scary, sad reality, though, is that Nancy Pelosi and her crew aren’t teenagers. They are adults who occupy positions at the center of American power. They are also, almost to a person (except maybe Manchin and Sinema), horrible malignant narcissists. As a collective, they demonstrate every trait of this dangerous psychiatric disorder, something just one step removed from sociopathy and two steps removed from sociopathy’s evil older brother, psychopathy (hyperlinks and footnotes omitted):

Malignant narcissism is a psychological syndrome comprising an extreme mix of narcissism, antisocial behavior, aggression, and sadism. Grandiose, and always ready to raise hostility levels, the malignant narcissist undermines families and organizations in which they are involved, and dehumanizes the people with whom they associate.

The social psychologist Erich Fromm first coined the term “malignant narcissism” in 1964, describing it as a “severe mental sickness” representing “the quintessence of evil”. He characterized the condition as “the most severe pathology and the root of the most vicious destructiveness and inhumanity”. Edith Weigert (1967) saw malignant narcissism as a “regressive escape from frustration by distortion and denial of reality”, while Herbert Rosenfeld (1971) described it as “a disturbing form of narcissistic personality where grandiosity is built around aggression and the destructive aspects of the self become idealized.”

[Otto] Kernberg described malignant narcissism as a syndrome characterized by a narcissistic personality disorder (NPD), antisocial features, paranoid traits, and egosyntonic aggression. Other symptoms may include an absence of conscience, a psychological need for power, and a sense of importance (grandiosity). Psychoanalyst George H. Pollock wrote in 1978: “The malignant narcissist is presented as pathologically grandiose, lacking in conscience and behavioral regulation with characteristic demonstrations of joyful cruelty and sadism”. Of note, M. Scott Peck uses malignant narcissism as a way to explain evil.

Malignant narcissism can be distinguished from psychopathy, according to Kernberg, because of the malignant narcissist’s capacity to internalize “both aggressive and idealized superego precursors, leading to the idealization of the aggressive, sadistic features of the pathological grandiose self of these patients”. According to Kernberg, the psychopath’s paranoid stance against external influences makes him or her unwilling to internalize even the values of the “aggressor”, while malignant narcissists “have the capacity to admire powerful people, and can depend on sadistic and powerful but reliable parental images”. Malignant narcissists, in contrast to psychopaths, are also said to be capable of developing “some identification with other powerful idealized figures as part of a cohesive ‘gang’…which permits at least some loyalty and good object relations to be internalized”. “Some of them may present rationalized antisocial behavior – for example, as leaders of sadistic gangs or terrorist groups…with the capacity for loyalty to their own comrades”.

It’s becoming clear just how close America came to complete disaster in 2016 when Hillary Clinton, the queen of malignant narcissists, almost took the White House. Instead, though (and thank God for this), we got the wise father. Sure, he’s the eccentric, flamboyant father who occasionally embarrasses everyone (“God, Dad! You’re embarrassing me in front of my cool European friends”), but he is ensuring that his children learn how to take care of themselves and, thanks to their own efforts, with minimal support from Mom and Dad, they will always be fed, clothed, protected, and happy in their lives.

And yes, I got all of that from the 2020 State of the Union speech.