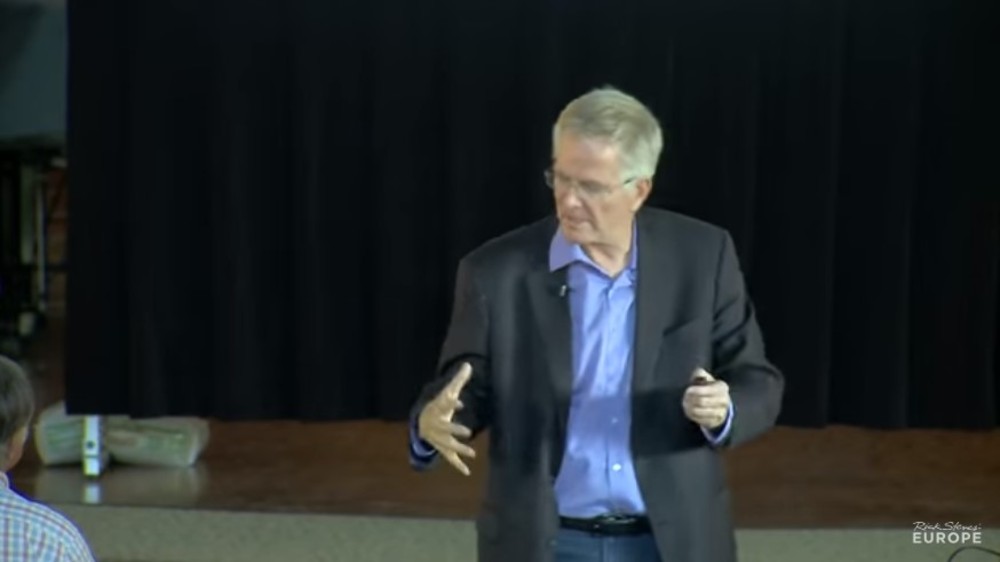 I regret that I cannot go back in time and boycott Rick Steves because, back in the day, I watched a lot of his travel videos and bought his products.

As long-time readers of my blog know, I am a very well-traveled person. For a decade, every time we went to Europe, we studied what Rick Steves had to say about our destinations. His approach to travel, which was to go a bit off the beaten track and see more than the famous sites really suited our family’s approach to European vacations. On just about every trip, we had a Rick Steves travel book in our suitcases.

I am now desperately sorry about that.

It turns out that Rick Steves is a virulent anti-Semite, trafficking in ugly stereotypes. I realized there was a problem when he did a travel show for PBS describing Iran in the most glowing terms. I thought that was stupid and un-American. However, I probably should have realized that anyone that in love with Iran would also hate Israel and, by extension, the Jews.

An organization called Stop Anti-Semitism has been watching Steves for a while:

Rick Steves is a California based notorious Jew hater and a travel enthusiast who has a YouTube Channel with more than 800,000 followers. He also runs well attended travel seminars and has a PBS radio show through which he spreads horrific lies about the State of Israel and his outrageous antisemitic views.

At an October 2019 lecture given by Steves at the Grace Lutheran Church in Palo Alto, he shared countless antisemitic and anti-Israeli lies and tropes including:

* Jews are parasites and feed off of U.S. aid;

* Israel was a post-Holocaust creation yet the irony stands that Jews oppress the Arabs today;

* Kosher laws are meant to isolate Jews from others;

* Israel cuts off water supplies for Palestinians on a whim;

* Jews are rich, Arabs are poor

(The video also takes a lot of low-level swipes at Trump, Trump voters, and flyover country. The progressive audience, of course, laps it up.)

One of the many stupid things Steves says is that he cannot imagine why people would be scared to go to the West Bank. Well, maybe Jew-hating Americans don’t need to worry. Jews need to worry a lot. Any Palestinian-controlled region is going to be Judenrein.

Steves is also a Muslim apologist. It’s really shocking how he spouts the Koran and how he thinks it’s “okay” to prohibit and kill people who are enemies of the Koran. “That’s the way Islam is.” One has to wonder if, perhaps, he’s a secret convert. And of course, he then throws in an attack on Christians killing abortion doctors. What a vile, vile human being.

Nor is the recent video Steves’ coming out as an anti-Semitism. In a 2014 video, he also regaled his viewers with fact-free, Palestinian lies about Israel. The most ironic one is that the Christian population in Israel is shrinking.

While it’s true that Muslims have driven Christians out of Nazareth, Jesus’s patrilineal land, and out of Bethlehem, the place of Jesus’s birth, the reality is that Christians have a safe and happy home in Israel. (Sadly, this doesn’t stop them from being anti-Semitic, but that’s another story.)

If you’re interested, the Stop Anti-Semitism post also explains how to try to remove Steves’ latest garbage from the internet.

As for me, I’m not going to dwell on past monies spent on that man. I didn’t know then what I know now. But should I ever travel to Europe again (and that’s doubtful given Europe’s anti-Semitism and increasing decay), there won’t be any Rick Steves products in my suitcase.