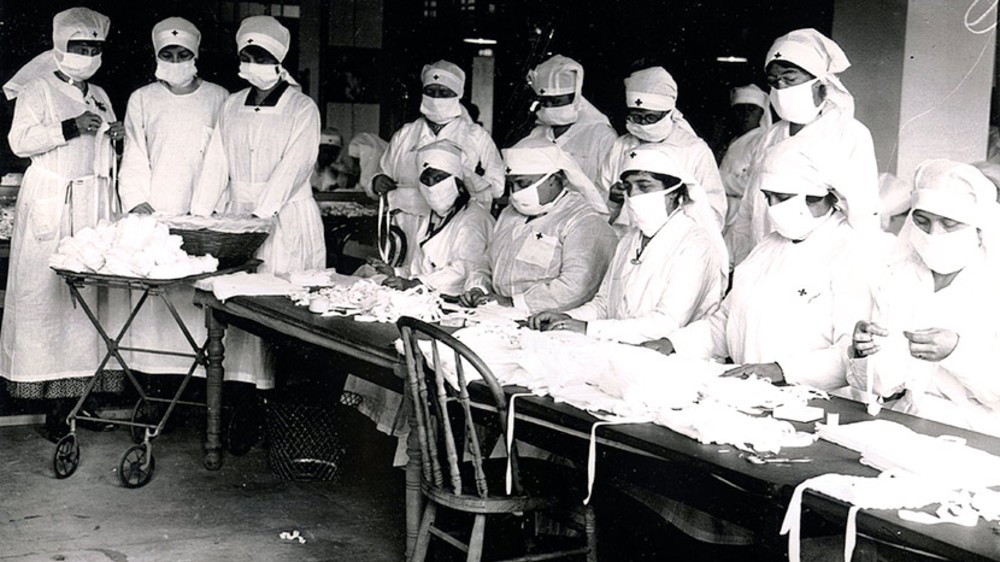 With coronavirus, we are returning to a time when healthcare providers took their lives in their hands when treating infected patients.

Once upon a time, being a doctor was a very dangerous job. In a pre-modern era, when no one understood disease transmission, if the patients got something, there was a very good chance that the doctor – and any assistants – would get it too. The plague, smallpox, yellow fever . . . all were risks for people in the medical field. Even after we understood disease transmission, there was still so little that could be done. That’s why Spanish Influenza and polio were also risk factors for on-the-job infection.

Indeed, right up until World War II and the discovery of antibiotics and then the Salk vaccination, medicine was a rewarding but still risky career. I thought of that in connection with a book I read a couple of years ago, Betty MacDonald’s The Plague and I. If MacDonald’s name sounds familiar, it’s because she wrote the best-selling The Egg and I in the 1930s and then, in the 1950s, came started writing her true legacy: the wise and whimsical Mrs. Piggle-Wiggle books.

Anyway, back to The Plague and I. The plague MacDonald writes about was tuberculosis, with which she got diagnosed in 1937. In a pre-antibiotic era, tuberculosis was one of the world’s great killers. According to a documentary I watched, the disease, which has been found in 4,000-year-old mummies, has killed more people than any other disease in the world — more even than malaria, which was a surprise to me.

By the turn of the last century, 1 in 7 Americans was afflicted with TB. Sometimes the disease killed slowly, and sometimes swiftly, but it always killed horribly. If you ever want to know how miserably some people died in a pre-antibiotic era, read about the death of Edward VI (Henry VIII’s) son, who died at 16 of what was probably spinal TB. He basically rotted from the inside out.

By the 1930s, the sanitariums had figured out that, if people moved as little as possible, their lungs might encapsulate the disease before it spread and killed them (either with hemorrhages or rot). Other treatments involved collapsing the lungs, removing parts of the lungs, and creating air pockets outside the lungs to put pressure inside the lungs — all in an effort to stop the disease’s spread to aid with encapsulation. Even with these treatments, though, 50% of all sanitarium patients died, some after spending years bedridden in those institutions.

Because MacDonald was destitute, she was admitted as a patient to the Firland Sanatorium, a charity hospital in Seattle. Her nine months there were something else, characterized as they were by boredom, rigid rules, cruel nurses, fear, pain, death and, for some, like MacDonald herself, eventual recovery. She was to live another 20 years, eventually dying of uterine cancer.

I hadn’t thought about MacDonald’s book for a while, but the other day I suddenly recalled her describing this nurse and that nurse dying from tuberculosis that they caught while working in the sanatorium. (I can’t remember if she mentioned doctors dying.)

Thinking about it now, it seems to me that, since antibiotics and modern vaccinations, the last time we had something even remotely similar – that is, health care workers risking death from treating patients — was during the AIDS epidemic. My memory, for what it’s worth (and it’s not always so good), is that very few medical care providers caught AIDS on the job. The greater fear was that doctors would give it to their patients.

This 1990 story from the New York Times about the death of Rudolph Almaraz, a Johns Hopkins doctor, is illustrative. Regarding Almaraz’s own death, his family would not say how he got it. Although his wife denied he was involved in risky sex, the reality was that she didn’t know because they were separated for some time. The real concern expressed in the article is that patients were worried that the physician would infect them.

AIDS was also a time when we learned that the media would willingly lie about a disease in order to protect special interest groups or advance a political viewpoint. (Michael Fumento has written at length about the way in which the media pushed the idea of AIDS as a “heterosexual disease” when, in fact, it was always tied most strongly to two things: male homosexual sex and intravenous drug use.)

Right now, I don’t trust the media at all. It’s so determined to “get Trump,” that all of its “factual” reporting seems colored by Trump Derangement Syndrome. That’s also true for stories from health care providers, many of whom are Trump haters, and some of whom are just (not unreasonably) scared.

Still, I do believe the reports about health care providers catching, or having the risk that they catch, coronavirus. (Here’s just one story.) In China, medical providers were terribly hard hit, including the whistleblower who exposed China’s lies. For the first time in a long time, being in the medical profession is no longer something that’s interesting, challenging, and rewarding, it’s now something that’s potentially deadly. This is a reminder that coronavirus is different from anything seen in modern times.

My sense is that coronavirus spreads with speed and that most people have no problems with it. What makes it so terrible is that those who do get hit hard die horribly. This is why the health care system is completely overwhelmed. These are not patients who are put in regular beds with fluids and antibiotics. These are patients who need the highest level of care and they all need it simultaneously.

These are not ordinary times and we seem to be drifting back in time.