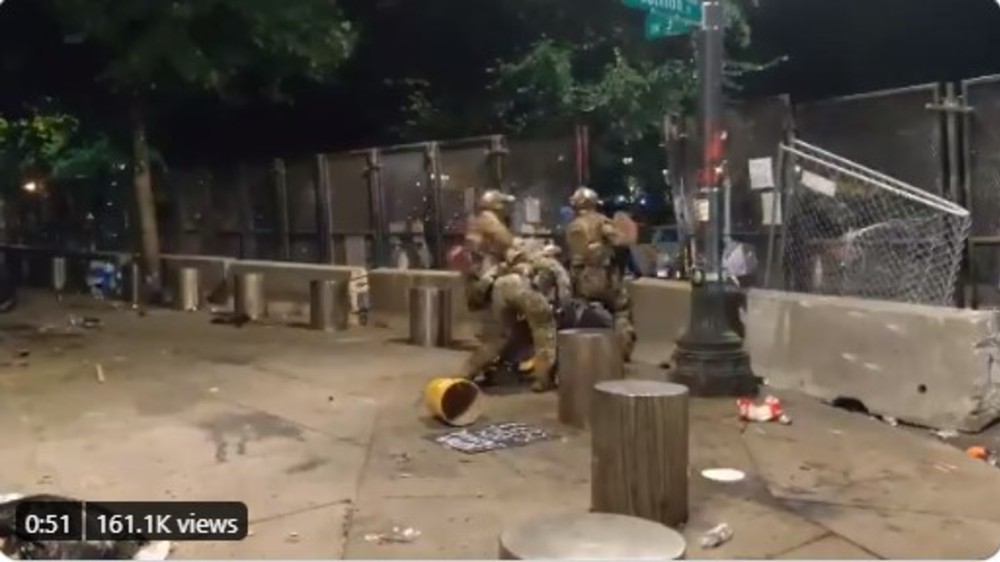 Democrats make endless stupid arguments to keep federal law officers out of their cities. One of my super-smart readers came up with a brilliant rebuttal.

Democrats are escalating the hysteria about Trump’s sending federal agents into riot-torn cities. Nancy Pelosi called these federal law enforcement agents “storm troopers.” That was pretty impressive considering that she’s a representative of the same federal government for which they work.

Then there’s Portland Commissioner Jo Ann Hardesty. Her Twitter feed lets you see the world through the eyes of a hard leftist who has, as the top photo on her Twitter page, a demand for unlimited abortion:

Am I the only one who’s looking at the above image and wondering who’s taking care of those alleged moms’ children?

That’s my city, standing up against federal & local police brutality. Together we are going to re-imagine community safety. I love you Portland! https://t.co/Yaqp5dd4vH

Reading that letter, did you notice that quintessentially leftist word — re-imagine? These aren’t adults facing the real world. These are children, playing at war — except they live in the real world and have real-world power.

Then there is Hardesty’s claim, going back to July 18, that Portland is being “occupied” by federal troops:

Mayor @tedwheeler, I’ve had enough. If you can’t control the police, give me the Portland Police Bureau. Full Statement below. pic.twitter.com/Xq4dkV2Tdr

Two comments about this so-called “occupation”: First, I thought “to occupy” was a good thing. That’s certainly how leftists viewed it when they took over Wall Street and other urban areas. Second, you know who could have written that line about a federal occupation? A pro-slavery Confederate commissioner. Democrats never change, do they?

At The Atlantic, the infamous Benjamin Wit-less (whom I fisked in what was one of my favorite posts) has joined with Quinta Jurecic to whine about the “attack on Portland.” I’m not going to waste time with that nonsense here and now. You can read it; you won’t be impressed.

My point with the above citations is that lefties argue that the feds have no right to be in their riot-torn cities.

However, I have the smartest readers in the world, and one of them sent me the perfect answer to this leftist whining. To understand how perfect this answer is, you have to appreciate that Portland’s mobs have been trying their hardest to burn down the federal courthouse in Portland:

Rioters keep returning to break down the barrier protecting the Portland federal courthouse and to start fires. Video by @ShelbyTalcott: #antifa #PortlandRiots pic.twitter.com/pWvIa82rlD

The footage in this next video is like a battle in the streets of Fallujah:

Rioters break down a section of the barrier at the Portland federal courthouse and go inside. A team of federal law enforcement officers rush in and make two arrests of people who didn’t manage to escape. #PortlandRiots pic.twitter.com/aHmmHQLApl

The city of Portland has joined in, demanding that the feds removing a fence they placed around the courthouse to protect it. According to Portland officials, the fence blocks a bike lane.

So, here’s my reader’s idea, which I haven’t seen anywhere else:

Just a thought reading the news re: President Trump sending in troops to protect Federal Buildings. I know he has legal grounds to do so, but I also think an argument can be made that he should do so because taxpayers from all parts of the country paid for those buildings. These taxpayers should not have to pay for rebuilding or repairing fed buildings because local governments declined to protect those buildings.

If local politicians want to let their populace run wild and destroy city-owned and local private property, well, the voters put those politicians in office. They will “reap what they sow.” However, as a federal taxpayer whose taxes are used to support federal infrastructure in that same area, if that fed structure is damaged, I have to pay for it to be restored. And I am not happy about paying for something twice because local politicians let rioters run wild.

I am supportive of my taxes and my charity donations being spent on aid in times of natural disasters, but allowing wanton destruction of property is not a “natural disaster.”

As I said, brilliant, right? The federal police are not protecting Oregon property or Portland property or even “federal” property. They’re protecting your and my property. Who the heck are the leftists to say they have the right to destroy what’s ours? (Duh, they’re leftists. Stupid rhetorical question but still….)