There are currently two conflicting visions of America and our powerful institutions are trying to make the dystopian version a reality.

We had a delightful thunderstorm move through here today, bringing with it huge flashes of lightning and thunder that shook the house. The only problem was that it knocked out my power.

The power came back quickly enough, but I was terrified to turn my computer on again lest it fry the circuits. I have a surge protector, but my computer still gets very cranky when it gets powered off abruptly.

I also still have unhappy memories of my first computer — a 512K Apple — getting completely sizzled while I was studying for finals at law school. Thankfully, I’d already transcribed and printed 90% of my handwritten notes, but the whole thing was stressful and expensive. Back in the day, I had sold a beautiful antique doll I owned, using the $1,600 I received to buy the computer. (In today’s money, that’s over $3,800.)

The computer was worth every penny, though. My grades skyrocketed once I was able to create my beloved outlines.

All of which is a long way of saying that I’m behind on my writing so, despite the long intro, this will be a short post.

What I wanted to write about — and I really don’t have that much to say beyond the obvious — is how differently America’s leftists and conservatives view the world. In some ways, that’s a completely obvious statement. Just look at your Facebook feed and see what your friends are posting about. That sense of a giant chasm between leftists and conservatives became more pressing when I was chasing down a point and I ended up checking the home pages of ABC, NBC, MSNBC, CNN, and CBS. (It was not a pleasant experience.)

I didn’t do a scientific survey, counting every article, but I came away with a few strong impressions about the issues leftist media is pumping into those Americans who look to it for news. First, Americans are all dying from, or in imminent danger of dying from, the Wuhan virus, especially in red states. Second, there is no difference between federal law enforcement agents and Hitler’s SS. Third, every country in the world despises Trump. Fourth, America is defined by hatred for black and transgender people.

There’s lots of other stuff on those websites, but those set the dominant tone.

When you spend your time looking at more conservative sources (which basically means FoxNews and conservative blogs such as PJ Media, Daily Wire, Daily Caller, American Thinker, Breitbart, etc.), the issues couldn’t be more different. First, anarchists are systematically tearing Democrat-run cities. Second, Democrats have destroyed the economies in their cities and states through panicked lockdowns, but their Wuhan virus numbers are still worse than in less panicked red states. Third, despite bad moments, America is still the least racist country in the world. Fourth, Democrats engaged in highly illegal conduct to achieve a coup against President Trump and it looks as if Bill Barr isn’t going to do anything about it before the election. Fifth, Democrats are using the disruption they created around the virus as an excuse to enforce mail-in voting which removes any hedges against fraud.

As with the leftist sites, there’s other stuff, but the things I listed set the general tone.

This world of division and chaos is different from the world in which I grew up — and that’s saying a lot considering that many of my formative years were defined by hippies, anti-war protests, and domestic terrorism. Back in those days, the establishment didn’t approve of those things. People in the media were Democrats, but most weren’t leftists.

There were three news channels (ABC, NBC, and CBS), every city had a morning paper and maybe a smaller afternoon paper, Time and Newsweek aggregate a week’s worth of news, women’s magazines told how to run a nice house, do crafts, and look pretty, and the New York Times and the Washington Post set the tone for all news. There was an amazing homogeneity of ideas.

More importantly, when agitators started agitating, all of these media outlets uniformly disapproved of what was happening on the streets. Even if they were sympathetic to the leftist ideals (as we now know the mainstream media was back in the 1960s and with increasing force in subsequent decades), America’s institutions disapproved of violence and chaos.

The media weren’t the only ones disapproving. I don’t remember the political class in my day supporting the riots or domestic terrorism. Sure, I was a little girl but we watched the news every evening at dinner (Walter Cronkite) and he was not pleased with the Weather Underground. I remember that. He may have been a lefty, but he was still a man who believed in his country.

Nowadays, for probably the first time in history, our nation’s institutions, or at least a significant number of them, have come to despise their own country. In the media, in government, and in academia, they’re all rooting for those who want to destroy those same institutions. It’s hard to find a workable analogy to explain the mass stupidity of those who live on the highest levels of the richest country in the history of the world, but who still encourage the Orcs who are busily destroying that country’s foundations.

In addition to having an “elite” class composed of intellectual and moral idiots, we also live in a world in which the different media present such different views that people can be neighbors and still effectively live in two different countries. I keep picturing Hieronymous Bosch’s Last Judgment: 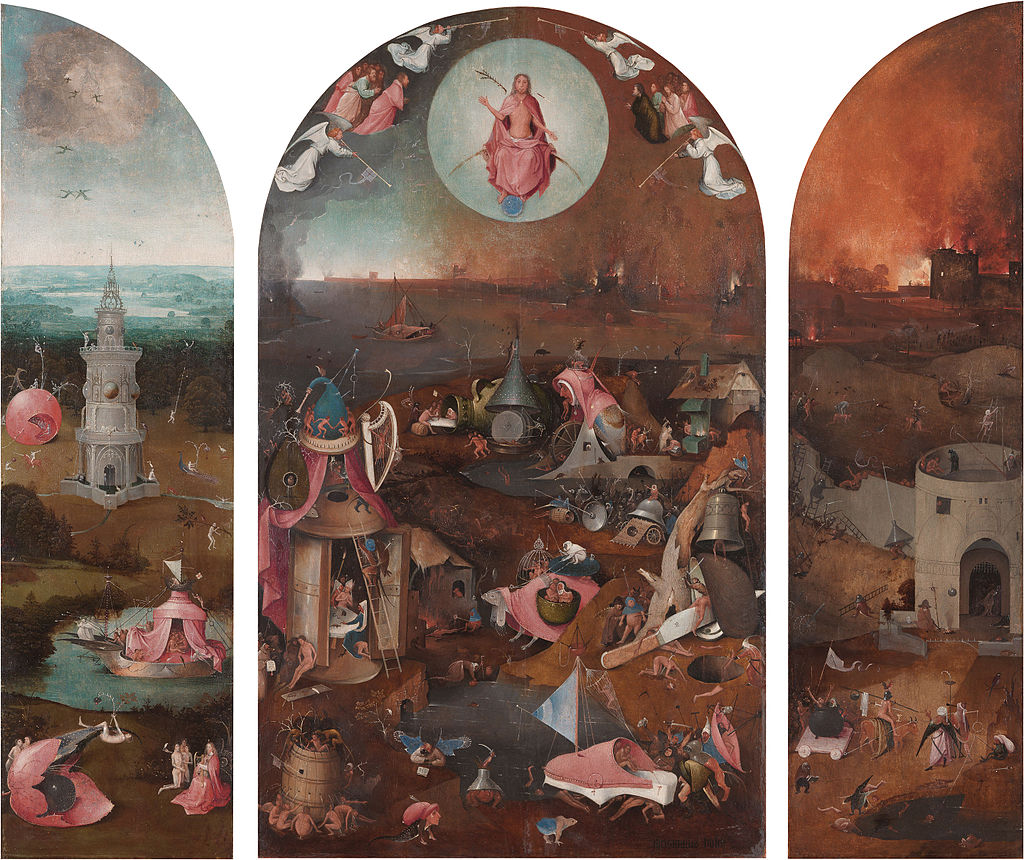 Years ago, when I started listening to Scott Adams talking about the lead-up to the election, he often mentioned the “two movie” theory. One is a fantasy and one is a documentary. Ultimately, he said, the documentary will win because the facts will line up with it.

Look at the leftist movie, though, which the billionaires, the media, many of the politicians, and a lot of the people are rooting for, I’m getting an icky feeling. If sanity and reality were the guides, the conservative view should be the documentary. However, although our ruling class is watching the dystopian fantasy, they have so much power (social media, traditional media, academia, etc.), they will force that fantasy to become real. It will be the documentary because that’s what they want.

Am I making any sense or has the day been too long and am I overthinking things? (Or maybe underthinking…. Or maybe failing to think entirely….)

Image: The featured image is a part of Hieronymous Bosch’s Garden of Earthly Delights. I included it here for no other reason than the fact that I like it.