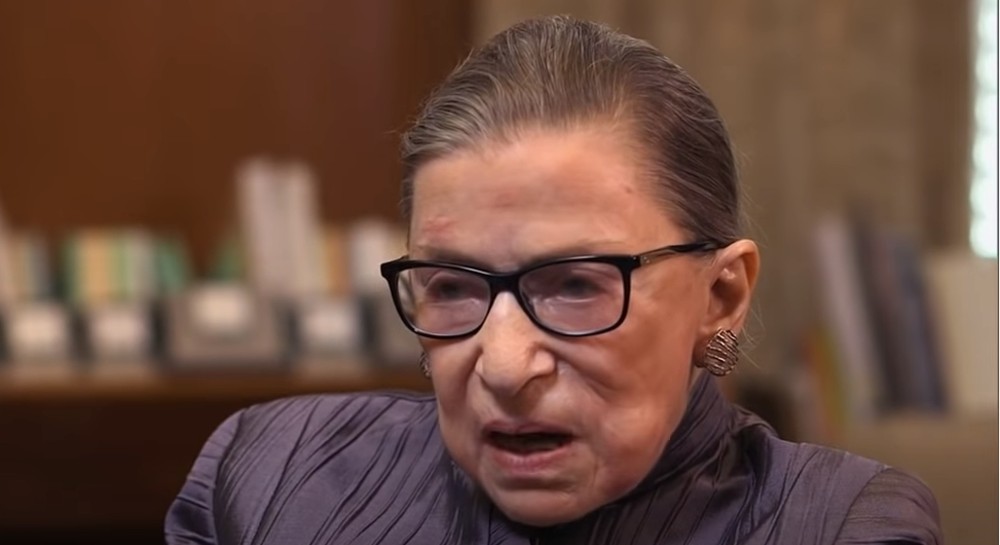 I’m abandoning the rule about not speaking ill of the dead. Ruth Bader Ginsburg was a politician in robes and we’re in a political season.

Ruth Bader Ginsburg has died. These are my first, rough thoughts, and they’re not in any particular order. I’ve also skipped hyperlinks, although I’m pretty sure my facts are correct or, at least, correct enough. Please feel free to add your thoughts to the comments.

1. My thoughts are with her family. Losing the mama and the matriarch is a painful thing, even if you’ve known it was coming. Having said that, let’s talk about the public figure, not the private person. And considering that everything Ginsburg did was political, this seems appropriate.

2. Ruth Bader Ginsburg was an appalling anti-constitutionalist, who always put her politics ahead of both the constitution and the law.

3. All of the leftist and RINO encomiums for her refer to her “fighting” for “equality and justice.” The mere fact that they can say that proves what an awful judge she was. If you’re “fighting” for “equality and justice,” you’re a politician. As a justice on the United States Supreme Court, Ginsburg’s focus should always have been on the Constitution. Had she had any respect for her job, she would have understood that it was for the voters and their representatives to “fight” for equality and justice. Her political side also showed in the fact that, disgracefully, she voiced an opinion in the 2016 election.

4. A good judicial opinion relies on the solid building blocks of precedent and statutory authority. The decision then rises clean and strong, like a house made of the finest materials, standing firmly on a stone foundation, with that stone being the Constitution. Ginsburg’s opinions, especially on issues that mattered to the left, were amalgams of random bits and pieces of law that could be cobbled together in a rough simulacrum of a shack. Ginsburg and her clerks hid this shoddy construction in muddy and muddled writing surrounded by myriad case citations that were never quite on point. Ginsburg’s decisions were one of the reasons I became a conservative. As a lawyer, I realized that she could reach the conclusions she did only through dishonesty and judicial sleight of hand. If she couldn’t reach those “principled” conclusions honestly, how principled were they?

5. Ginsburg long ago gave the game away on abortion. She knew that it wasn’t about giving women choices and making their lives better. Instead, as she said, it was about getting rid of population groups that Ginsburg and her elite, most white, leftists didn’t want around. Ginsburg didn’t frame it in terms of race, but it certainly worked out that way.

6. Ginsburg had no respect for the Constitution she was sworn to defend. I have a link somewhere of Ginsburg saying that, if she had the choice, she would have done it differently. She didn’t say so explicitly, but she implied that doesn’t like our Constitution because it is built upon a weak(ish) central government and inherent individual rights. She would prefer something along the lines of the EU’s constitution, which has a massive centralized government micromanaging individual lives, with “rights” being predicated upon people’s relative situation vis-a-vis the government class’s preferences. Moreover, despite being labeled as rights, they’re clearly mere privileges that the government can bestow and withdraw as it wishes.

7. Ginsburg’s politicizing the Court is part of why we’re at the situation we are today, where a Justice’s death can throw an upcoming election into an uproar. When judges legislate, as she and her fellow leftists on the Court have been doing, the Court takes on oversized importance. For decades, leftists who couldn’t get their fellow citizens to vote on their policies were able to use the Court as a super-legislative body. This is not what the Constitution intended, and it means that we Americans are being ruled by a cabal of 9 people who hold their positions for life. They are, in essence, a form of non-democratic absolute monarchy.

8. Ginsburg was a terribly selfish lady. Apparently she said on her deathbed that she didn’t want Trump to nominate her successor. If she didn’t want a Republican to do that, she should have retired on Obama’s watch. At the very least, despite a Republican Senate (it was Republican in his last two years, right?), Obama could still have pushed through a mildly leftist judge. After all, the Senate was a RINO funhouse then and, if Obama had nominated a black man, even a communist, they would have said yes.

9. Mitch McConnell apparently sent out the message that he stands ready to confirm whomever Trump nominates right now. The problem is that Lisa Murkowski has already said she won’t do anything until the inauguration. Mitt Romney has proven that he will always place his ego over the good of the country, proving that he’s McCain’s spiritual heir. Why, oh why, do voters choose such awful, weak people. There’s also speculation that Susan Collins is in a tough race, implying that she can’t win if she votes for a new Supreme Court Justice in the next 45 days. My current thinking is that a conservative Supreme Court nominee is more important even than a Republican majority in the Senate in the next term. We might be able to survive a “Harris/Biden” administration, but I don’t know that we can survive a Harris/Biden administration and a strong leftist Supreme Court. That means that Collins should put her country ahead of her career.

10. We have to brace for the storm. Combine the Ferguson riots with the George Floyd riots with the Kavanaugh madness, and you will have a rough sense of the temper tantrum the left will throw. We have two choices. We can say, “No, no, let’s just wait for the election to happen. If it’s Biden, well, it’s all over anyway. And if it’s Trump, well, then we’re ready to deal with the left.”

That’s wrong. The moment we say that, we’ve already yielded to the mob’s veto. Americans in 2018 gave Trump a Senate majority because he promised to give us a non-activist Supreme Court that’s guided by the Constitution, not Das Kapital, as run through a modern “social justice” filter. We’ve still got that president and that Congress for a few more months and we should get what’s promised. Yes, the left will run amok but we have to stand up to them. Otherwise, America becomes Mogadishu. The blackmail of violence has got to end.

11. I think Trump needs to nominate Amy Coney Barrett. As far as I know, in addition to being a superb judge in the strict constructionist mode, she’s as pure as the driven snow. The only way the left can attack her is that she’s Catholic, and I don’t think American voters outside of the leftist Swamp will like that approach.