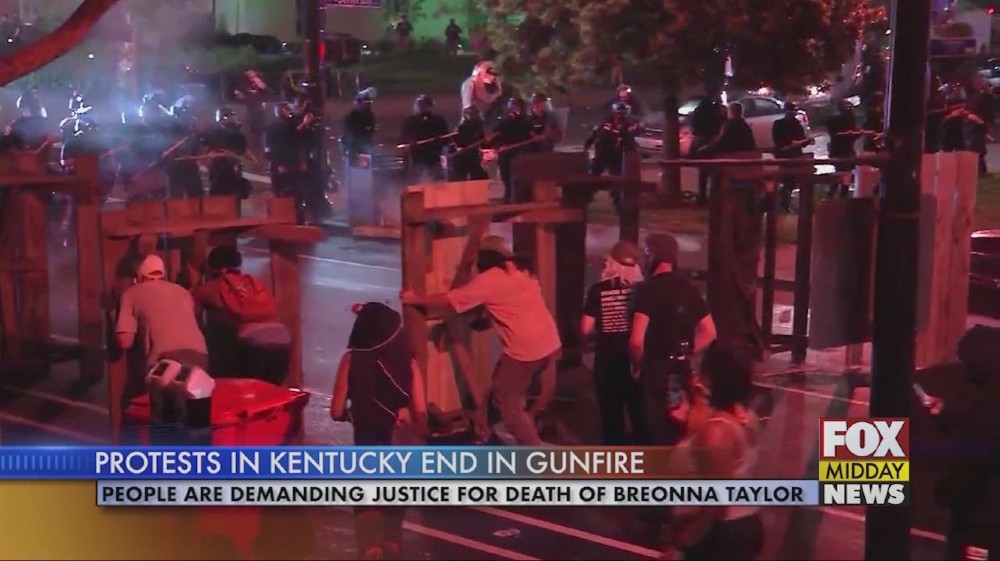 Everything on which BLM is based is founded on lies and falsehoods — not the least of which is their portrayal of the Breonna Taylor case.

The truth has finally emerged about Breonna Taylor’s death this past March. It turns out (surprise!) that the Democrat party – in Congress, in the media, and on the streets – has been lying. Taylor was not a complete innocent whom racist police slaughtered in her bed during a no-knock raid. Instead, she was the victim of her poor choices in men: Her friendship with a local drug kingpin justified the raid and her boyfriend’s decision to open fire on police who had knocked and identified themselves led to her shooting. That certainly doesn’t mean she deserved to die, but it explains why she did.

Andrea Widburg, American Thinker (and if you are not reading Ms. Widburg daily — she writes four or more posts each morning in the right-hand column of American Thinker — you are doing yourself a disservice.)  That is the pithy version of it all.

Much of what we’ve been told about the case turns out not to be true — another “Hands Up, Don’t Shoot” urban legend of police brutality. Most prominently, Attorney General Cameron explained that the police did not execute a “no knock” warrant before entering Ms. Taylor’s apartment. They knocked and announced themselves as police before forcing entry shortly after midnight.

How they came to be at Ms. Taylor’s home, with a search warrant based on probable cause that evidence of narcotics crimes would be found, is the part of the story the social-justice warriors would have us omit. It needs telling.

When she was killed, Breonna Taylor was 26, a hospital emergency-room technician who hoped to become a nurse. But over the years, she had gotten involved with Glover, a 30-year-old twice-convicted drug dealer. Though she was never a targeted suspect, the New York Times reports that Ms. Taylor was entangled in the frequent police investigations of Glover. Taylor remained romantically involved with him though he had spent years in prison. . . .

What the mob wants, though, is murder charges against the two cops who shot Ms. Taylor. There is no conceivable legal justification for that. The police were properly executing a lawful warrant. There appears to have been more than adequate probable cause for the search in light of Glover’s ties to the apartment. Even if there were any doubt about that, the warrant had been duly authorized and therefore police were entitled to rely on it. And they were fired upon before reasonably responding with lethal force.

What happened to Breonna Taylor was a calamity. That is why the city of Louisville just paid $12 million dollars to settle the wrongful death lawsuit her family filed, rather than trying to fight it. Obviously, the money cannot bring her back to life, and will never be adequate compensation for her loved ones’ loss. But that could also have been said for the politicized filing of unprovable homicide charges. The legal system can only do the best it can; it cannot fully compensate for tragic loss, and its criminal processes are not equipped to address catastrophes that are not crimes.

The state of Kentucky was right not to opt for mob justice. Unfortunately, the mob has a different conception of “justice,” and it is ripping the country apart.

Where have we seen this basic fact pattern before?  A black person resists arrest, then dies (or in Taylor’s case, a bystander) in the process — whether or not at the hands of police.  A dark and twisted popular legend immediately springs up, fanned by BLM (most of whom seem to be college miseducated white women and their like-minded lily-white soy-boy kin), progressive politicians, the media, and race hustling lawyers, all of whom falsely claim that the death was caused by the misdeeds of racist police.   A BLM mob howls for vengeance and is facilitated by social media.  MSM talking heads pontificate about how black people are hunted by racist police in America.

Livelihoods are ruined, cities are hollowed out, crime spikes from the Ferguson Effect, and those hurt by far the most are low income, inner-city blacks.  The careers, if not the lives, of the police involved in the subject incident are destroyed by progressive politicians and progressive prosecutors (many of whom are funded by George Soros) who, while persecuting the police, do nothing to hold the rioters to account.  Later, the facts slowly emerge to show that the police acted reasonably and with no indicia of racist intent.  Yet anyone who points out those facts is charged with racism and the mobs continue on, blissfully embracing their preferred narrative to justify their own destructive and criminal actions.

This is the fact pattern undergirding virtually every single BLM-inspired riot in the U.S. since BLM was foully birthed in the wake of the self-defense slaying of Treyvon Martin.  They are bound and determined to rinse and repeat until there is nothing left of this nation but for progressive politicians (or so they hope) to pick up the pieces.   Of course, as I point out seemingly ad infinitum, the people advocating all of this may be Marxists, but what they are pushing is pure tribalism.  The end game of their schtick is not Marxist Nirvana, where all social classes disappear (but for the upper white class leading the movement, who think they will remain as more equal than the other animals on the farm); it is permanent tribalism where people are defined not by their character, their merit, and by their fealty to the Constitution, but by their skin color, gender, and sexual orientation.  It would be a nation of intentionally unequal justice and unequal standards, and ultimately, a situation that cannot stand.  It benefits no one but a few progressives who see it (as wrongly as the soon-to-be-beheaded Robespierre) as a means of gaining power.  Their reign might, in the end, vie in length with the Roman Emporer Otho, a man who reigned for only three months.  Their success is our nation’s doom.