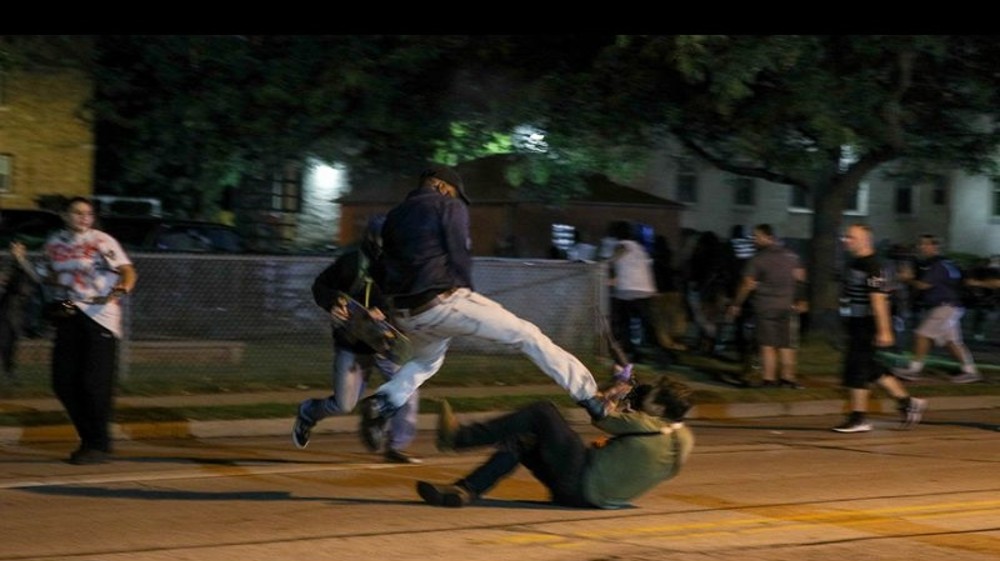 Do BLM rioters rule the streets, eclipsing the rights of all other Americans?  Can rogue progressive prosecutors ignore the 2nd Amendment and the right to self-defense?  Those issues go to the heart of the Kyle Rittenhouse case and the new Jim Snow Movement.

There is not just a war on policing in America by BLM.  There is equally a legal war being waged by progressive prosecutors on the right of Americans — and particularly non-proggressive white Americans, to self-defense.  It is the de facto institution of Jim Crow laws, only in reverse.  Call it Jim Snow.  The rogue prosecutors must be made to pay a price.

Kyle Rittenhouse was the 17 year old who killed two rioters and injured a third in Kenosha, Wisconsin on Aug. 25, 2020.  Within two days, District Attorney, Michael Graveley, filed a criminal complaint against Rittenhouse, outrageously charging him with homicide (2 counts) reckless endangerment (2 counts) and misdemeanor possession of a dangerous weapon by a person under 18.  I say outrageously because the facts as set forth in the complaint lead inescapably to the reasonable conclusion that Kyle Rittenhouse acted at all times in self defense.

Here is a video produced by Rittenhouse’s defense team incorporating the multiple video’s of the events of that night.

To raise the issue of perfect self-defense, a defendant must meet a reasonable objective threshold. The trial evidence must show: (1) a reasonable belief in the existence of an unlawful interference; and (2) a reasonable belief that the amount of force the person intentionally used was necessary to prevent or terminate the interference. Wis. Stat. § 939.48(1). (State v. Head, above, 255 Wis. 2d 194.)

If you’re wondering, an “unlawful interference” means that the other person involved (the one who was killed) was imminently planning to do something that would unlawfully interfere with the defendant’s person (i.e., was going to kill the defendant).

It certainly appears from the videos that Rittenhouse has an iron-clad claim of self-defense.  The video montage adds a bit of relevant information to the criminal complaint, but contradicts nothing already in that complaint (wherein it also appears that Rittenhouse has an iron-clad claim of self-defense.)  Rittenhouse was retreating from conflict.  The two individuals who were killed were both stalking and chasing Rittenhouse and both attempted to wrestle away his weapon.  In the case of Huber, he also attacked Rittenhouse with a blunt object as he tried to take the gun away.  In the case of the wounded man, Gaige Grosskreutz, he was armed with a handgun.  He came at Rittenhouse at the same time as Huber, held his hands up and back away for a moment when Huber was shot, but then resumed coming at Rittenhouse.  Rittenhouse fired one round, wounding Grosskreutz in the bicep.  It is hard to imagine three more open and shut cases of self-defense as defined by Wisconsin law.

As to the final charge, Wisconsin is an open carry state and its Constitution explicitly allows citizens therein to bear arms for the purpose of defending themselves.  That said, it is a misdemeanor for a person under the age of 18 to carry a “dangerous weapon.”  While Rittenhouse is guilty of that offense, that offense is not a predicate for any of the other crimes alleged and does not negate his defense of self-defense.

Moreover, that Rittenhouse chose to put himself in Kenosha while the BLM riots were ongoing, despite what progressive prosecutors may espouse, that has zero impact on his claim of self-defense.  For instance, according to Rawstory three weeks ago, “MSNBC prosecutor blows apart Kenosha gunman’s self-defense claims” recounts a progressive prosecutor claiming that Rittenhouse was the “initial aggressor” because he had no right to be in Kenosha on that night.  That is ludicrous.  It cedes to the mob jurisdiction over any territory they claim or occupy.  There is no basis in the law for that claim — nor on the facts is there any basis for claiming that Rittenhouse, who was being chased, stalked and assaulted, was at any time the “aggressor,” whether initial or otherwise.  Further the MSNBC prosecutor opined:

So he was the initial aggressor, and under the initial aggressor doctrine, he’s not allowed self-defense unless he makes it clear he’s abandoning the fight or others come at him using excessive force, and according to videos doesn’t look like either of those claims hold water,” he continued. “Because the first person that he shot didn’t have a weapon. The second person he shot and killed came at him with a skateboard. The lawyers will say a guy wielding a skateboard could be dangerous. You tell that to a jury that Rittenhouse, who had an AR-15, was in reasonable fear of his life from a guy with a skateboard.”

One, Rittenhouse ran away from his first attacker, only shooting him when he was stopped and the attacker made an attempt to steal Rittenhouse’s gun, something that was a felony and that would have left his “unarmed” attacker armed with a deadly weapon.  Two, the same can be said of the second attacker, who additionally began hitting Rittenhouse with a skateboard — apparently an ANTIFA weapon of choice.  Anyone swinging a hard, blunt object at another is involved in an aggravated assault.  Death by blunt object is exponentially more common than death by AR-15 or any rifle.  And indeed, there were cases in the news prior to this night of people being seriously injured in attacks by ANTIFA anarchists wielding skateboards as blunt objects.  If Rittenhouse wasn’t in fear for his life, he would have been an idiot.

Moreover, according to self-defense expert Andrew Branca, writing at Legal Insurrection. the law places the burden to disprove a self-defense on the prosecution:

Once the burden of production has been met on the legal defense of self-defense the question is then which party bears the burden of persuasion—that is, whose job is it to convince the jury of the truth or untruth of the self-defense claim. Further, by what legal standard or threshold is that proof to be made.

In 49 states [but for Ohio] it is the prosecution who bears the burden of persuasion on self-defense, and who must disprove the claim of self-defense beyond a reasonable doubt.

It used to be fairly common across the United States that the burden of persuasion for self-defense was placed on the defendant, who must prove self-defense by a preponderance of the evidence. Over the last several decades, however, every state has abandoned this approach and instead decided to make self-defense effectively a negative element of the crime charged, and adopted the burden described in the prior paragraph.

Thus an ethical prosecutor must, as a practical matter, evaluate self-defense.  To state it another way, the prosecution must in good faith believe that they can disprove the elements of self-defense of which they have notice before charging.  That sure as hell did not happen in this case.  But this is part of a larger pattern we are seeing across America described by Andrew McCarthy several months ago:

May I introduce to you, then, a new and uniquely destructive actor on the 21st-century scene: the progressive prosecutor.

For such law “enforcers,” the obstruction of immigration-law enforcement barely scratches the surface. The agenda here is to obstruct prosecution itself. It is, to quote Chesa Boudin, the newly elected progressive prosecutor described above, “a movement…rejecting the notion that, to be free, we must cage others.”

The movement he mentions is self-consciously racialist. It is not merely heedless of, but fiercely hostile to acknowledgement of, one signally inconvenient fact: The disproportionate incarceration rate for African Americans in comparison to their proportion of the overall population (like the closely related higher rate of crime victimization suffered by African-American communities) is due to striking differences in behavior. For all the chatter about “reform,” what the left calls “mass incarceration” is not principally a criminal-justice issue. It is the glaring symptom of a cultural issue, inextricably intertwined with what progressive governance has done to erode bonds of family, faith, and intermediate institutions that not so long ago had pride of place over the individual’s ties to (and dependence on) the state.

One blogger, I do not recall who, called this the new Jim Snow movement.  It manifests in three ways.  First is the refusal of progressive prosecutors to prosecute black crime and crime carried out by white progressives in support of Antifa and BLM.  Crime is skyrocketing in cities with progressive prosecutors as a result.  Second is in the prosecution of police for using force to apprehend and subdue blacks who resist arrest to the point of endangering the lives of the police and others.  As Heather MacDonald points out, Blue Truth Matters. Third is in the prosecution of whites for daring to defend themselves against Antifa and BLM violence.  As Andrea Widburg sagely asked in July, “Have we reached the point where self-defense is a crime?”  I think we can now answer, it seems to be, but only for whites.  Rittenhouse may well be the poster child for this last manifestation, but we have seen it as well in many other examples, including the prosecution of the McCloskeys in St. Louis for daring to show weapons when rioters marched on their property.  We’ve seen it in the decision to charge Jake Gardner with manslaughter after the DA, who had refused initially to prosecute based on self-defense, later cravenly surrendered to mob cries for blood, a charge that led the decorated veteran to commit suicide.  And of equally recent vintage:

BLM protesters in Milwaukee, Wisc. surround a man’s house. He has a Trump & US flag on the outside. He appears to ready a gun from inside the home. He was reportedly arrested for brandishing the weapon. pic.twitter.com/tMKFUGVCa5

All of this has to end.  The doctrine of prosecutorial immunity needs to be waived and these progressive prosecutors held liable for their outrageous assault on the foundations of our nation.  It took the better part of 70 years to do away with Jim Crow laws.  We, as a nation, cannot afford for progressive prosecutors to enact a new and de facto Jim Snow regime.