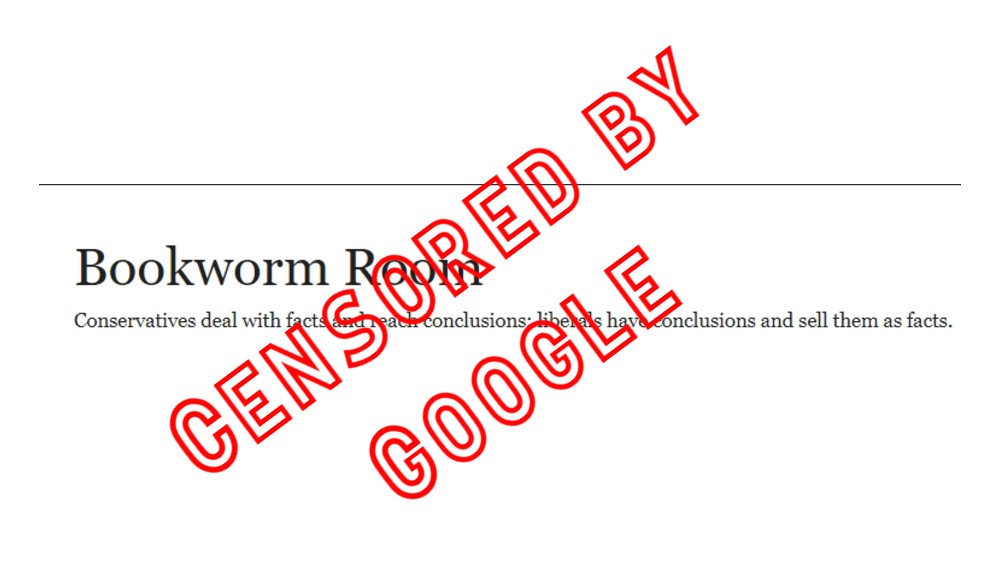 We’re told that God’s “eye is on the sparrow,” because nothing is too small for him to see. Unfortunately, the same is true for Godless Google.

Despite my having blogged for 16 years now, and having the best, smartest, most loyal readers in the blogosphere, the fact is that I am a very tiny player. An inconsequential one, even.

You’d think, therefore, that Google, in its drive to delete conservative thought from its search engine, would ignore me. You’d think wrong. I have proof.

The encyclical also turns St. Augustine on his head by saying there’s no such thing as a just war. Those Jews, gypsies, homosexuals and others who barely survived the Holocaust would disagree. So would all the Eastern Europeans, especially the Poles, whom the Nazis did not get the chance to enslave or slaughter.

Francis also has his usual plea for open borders. (He frames it as caring for refugees, but in his case it’s the same thing.)

Lastly, Francis dreams of world peace, which is a nice thought, but he has already united with an Islamic imam to preach it. By doing so, he ignores that, in the Islamic world, peace (Dar al-Islam) is achieved only after war (Dar al-Harb) has converted the religious wars’ survivors to Islam. Some peace.

Since 2013, I’ve been arguing that Pope Francis’s stupidity (yes, I’m calling a Pope stupid) comes about because he grew up in Latin America’s Church which was completely overtaken by the communist “liberation theology” doctrine. I wrote a detailed post about the doctrine and its effect in Latin America.

I wanted to link to that doctrine. I therefore had two search options. I could have searched for the post using the search function on my blog’s dashboard. I don’t like using the dashboard search, though, because it’s a miserably limited, slow way to find things.

What I prefer to do to find a post on my blog is to use a regular search engine. I type in my full blog name (bookwormroom.com) plus words I know with certainty are in the title. Here’s how it works in Bing:

Unfortunately, I didn’t do my search in Bing. Because I was using a Chrome browser (long story), I inadvertently ended up doing a Google search. Here’s that search in Google, which explicitly notes that “Bookwormroom” is missing from the link returned:

Moreover, in addition to finding 87,800 possible results, the Google search returns only eight responses, and I can assure you that none of them includes “bookwormroom.com.”

Well, maybe my search was just too broad for Google’s machinery. How about if I use the entire title from my post, along with my blog name? That should encourage Google to return my post.

Nope. Not that either. As you can see, the search, which yields only two results, returns links to my archives, but not to the post itself:

I find this upsetting. And no, I’m not upset because my ego is involved — although it would be nice if people searching for liberation theology information in connection with Pope Francis would be directed to my site.

The reason I find this upsetting is because it reflects how thorough Google’s blacklisting is. Just as God sees even the smallest sparrow, which is a good thing, Google sees even the most inconsequential blog — and then censors it, which is a very bad thing.

Whenever I’ve heard about Google censoring the big sites, such as American Thinker or Breitbart, I’ve consoled myself by saying, “Well, we still have that rag-tag army of smaller pajama bloggers, all out there saying the same things. If people want to find this information, they can.” My experience with Google, though, shows that if people want to find this information, they can’t. They’ll find variations on the theme, but they won’t find that one small blogger who spells out the fact that Pope Francis is a communist which is, when you think about it, a pretty serious charge to make (and one that I feel I back up).

This matters because the vast majority of people in America, when they need a search egeine, go to Google. If Google doesn’t return something in its search results, that thing may as well not exist. It’s like the sound of one hand clapping or that tree falling in an empty forest with no one to hear. The post exists, yet it does not exist.

When (God willing) Trump is reelected, he needs to throw everything he’s got at Google. No entity should control so much information using so much bias.