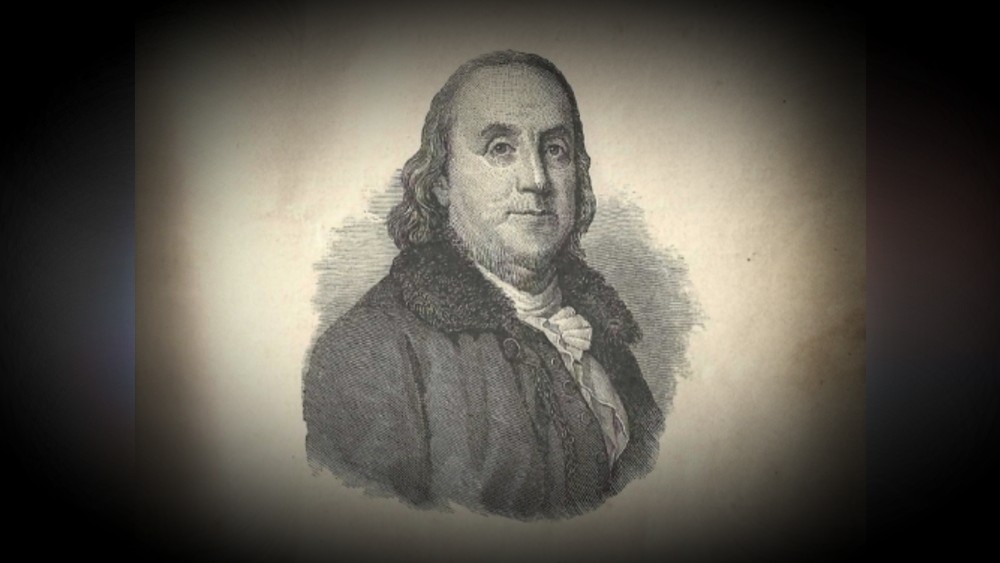 Reviewing two textbooks from the 1880s, both of which covered the humanities, reminded me how far American education has fallen.

In the 21st century, kids stay within the education world for longer than they ever have before in history. Most go through 12th grade, many go on to four or five or six years for a college undergraduate degree, and a subset of those extend education into their late twenties and thirties as they get specialized degrees. But even after spending 12, 16, or 20 years in the academic world, are they educated?

My sense, after conversing with young people who are my children’s peers, and after conversing with my own children, is that they’re not very educated. They haven’t learned anything of the Western canon, they haven’t been taught grammar, and they don’t know logical or rational thinking. In lieu of the Western canon they have political correctness (reading about South African brothels rather than Shakespeare when they’re 10th graders) and in lieu of rational thinking they get huge amounts of climate change and Marxist economic policy. They also learn nothing positive about America. They are indoctrinated, not educated.

Once upon a time, kids got a basic, rigorous education in a common Anglo-Saxon intellectual culture. I’m very aware of that today because I have sitting beside me Bancroft’s Fourth Reader from 1885 and Appletons’ School Reraders; The Fifth Reader from 1883. I’ve had them forever, but I’d lost sight of them because they were stored away. I only discovered them because I finally went through my 1,000 or so books.

These “Readers” were basically the “liberal arts” side of a child’s education. They cover English grammar and literature, as well as history and what we now call “civics” and “social studies.” They also included moral lessons and, although I didn’t scan them, include several Biblical texts. Here are some random pages from the Fourth Reader, which means it was aimed at 9 year olds. Please note that the first essay is about Benjamin Franklin. 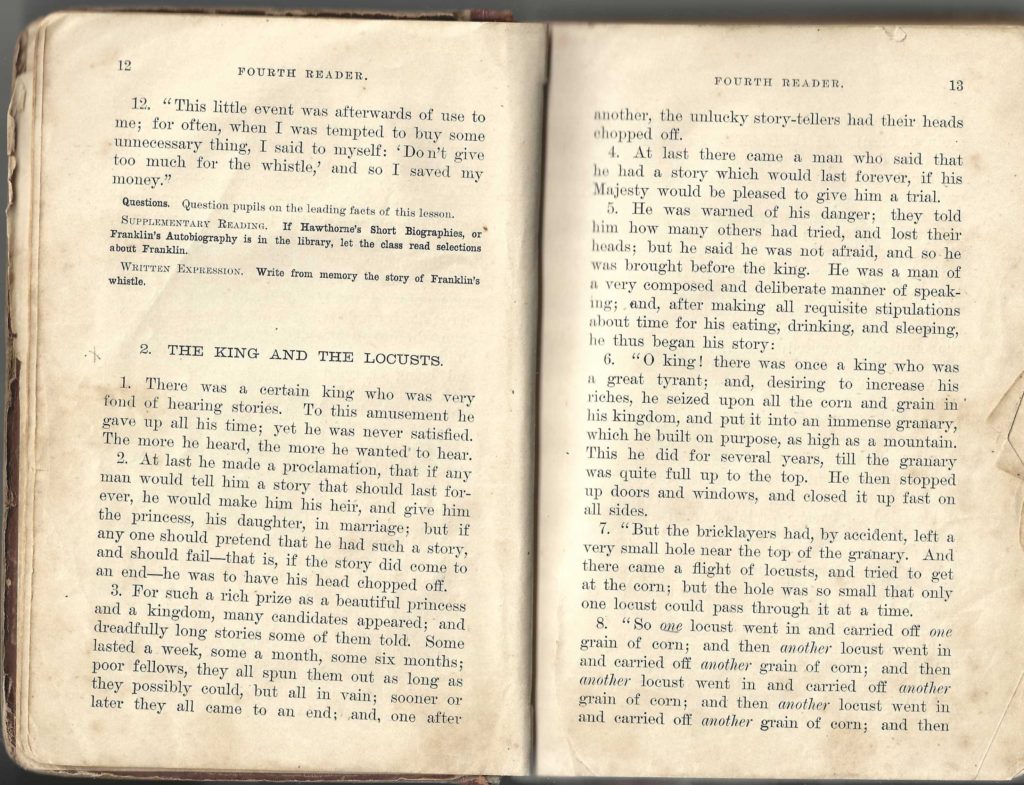 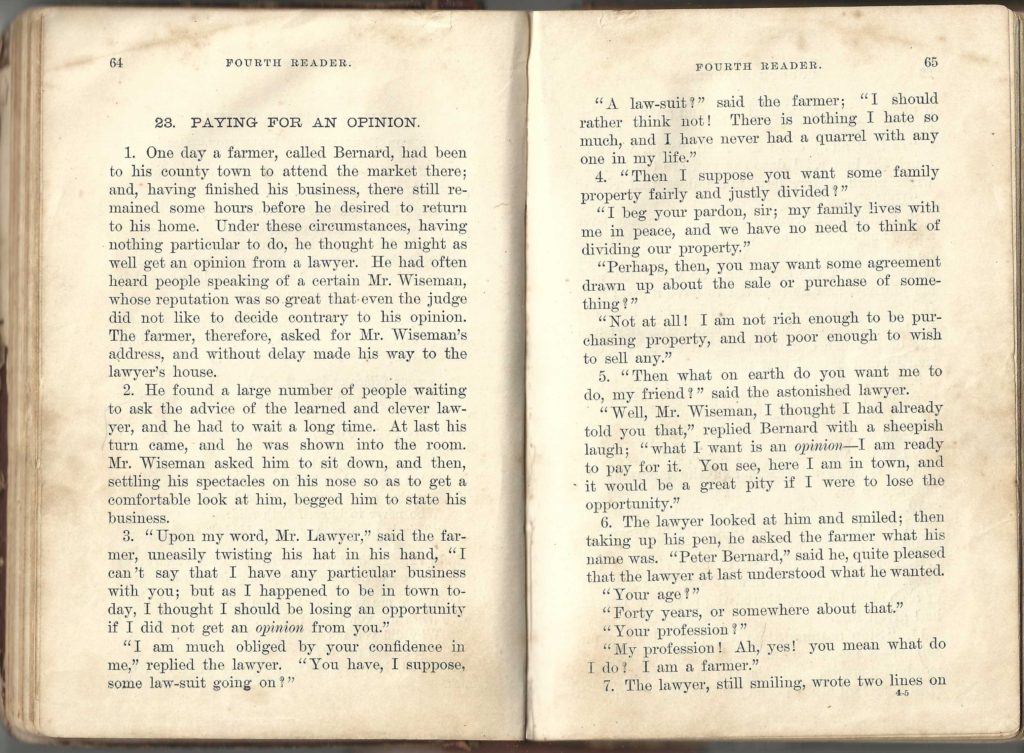 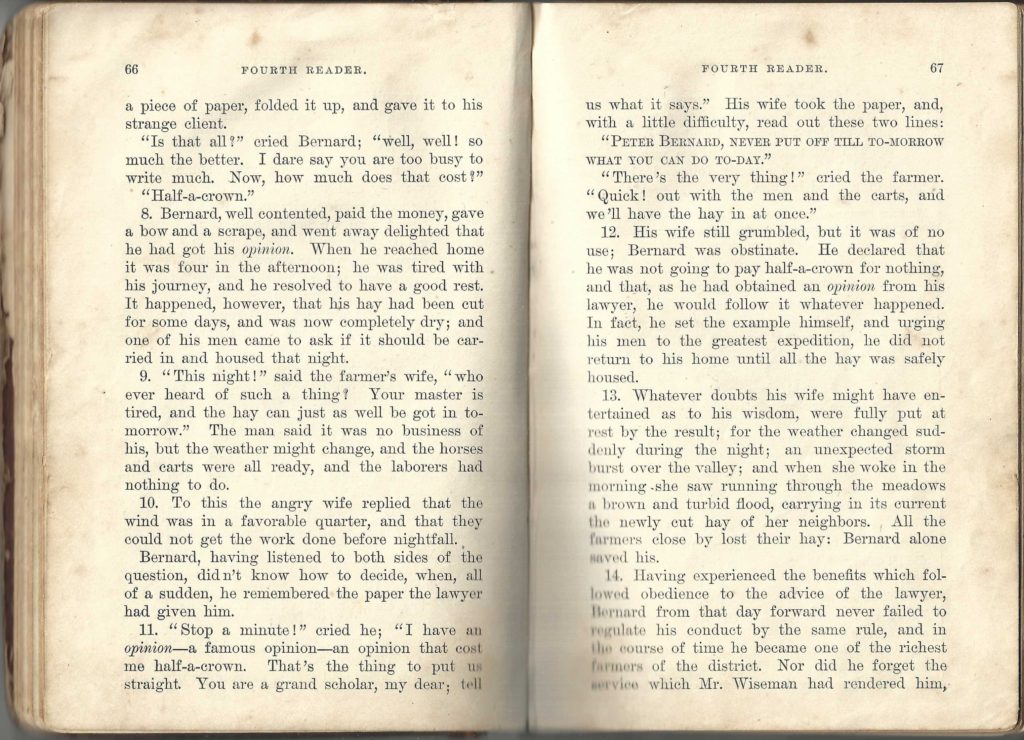 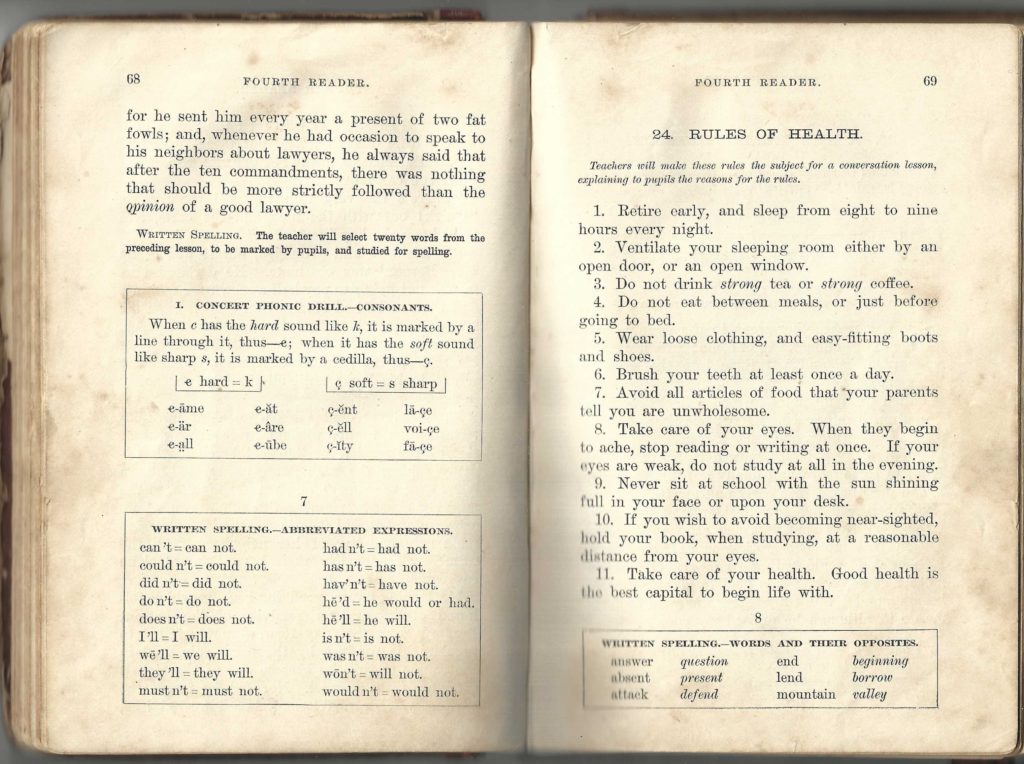 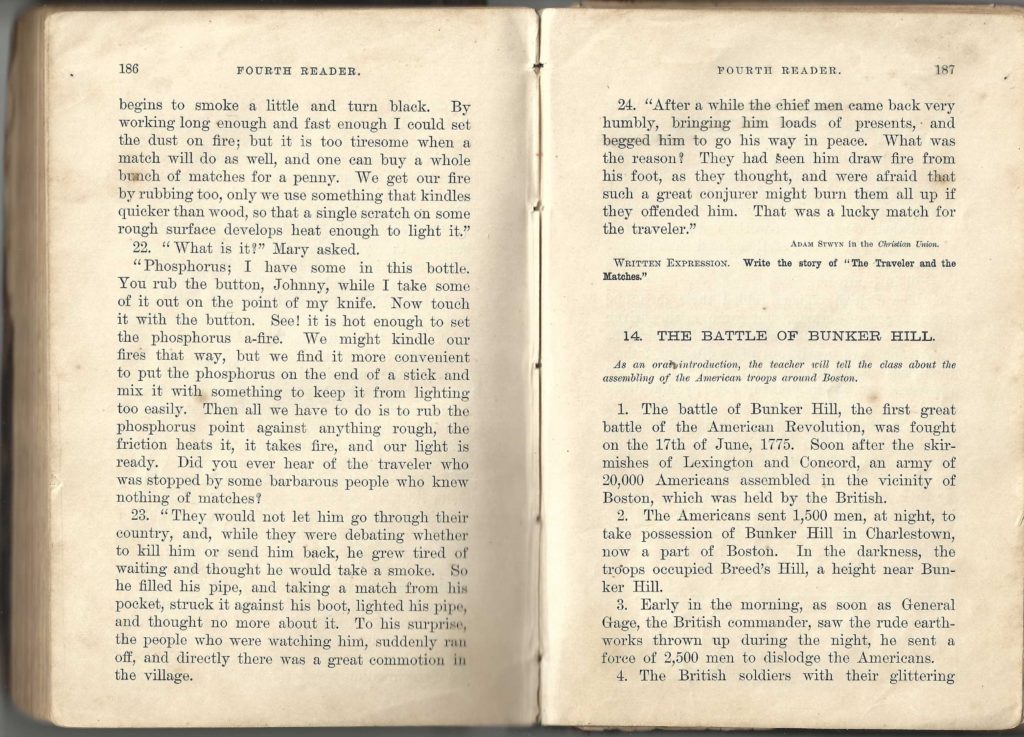 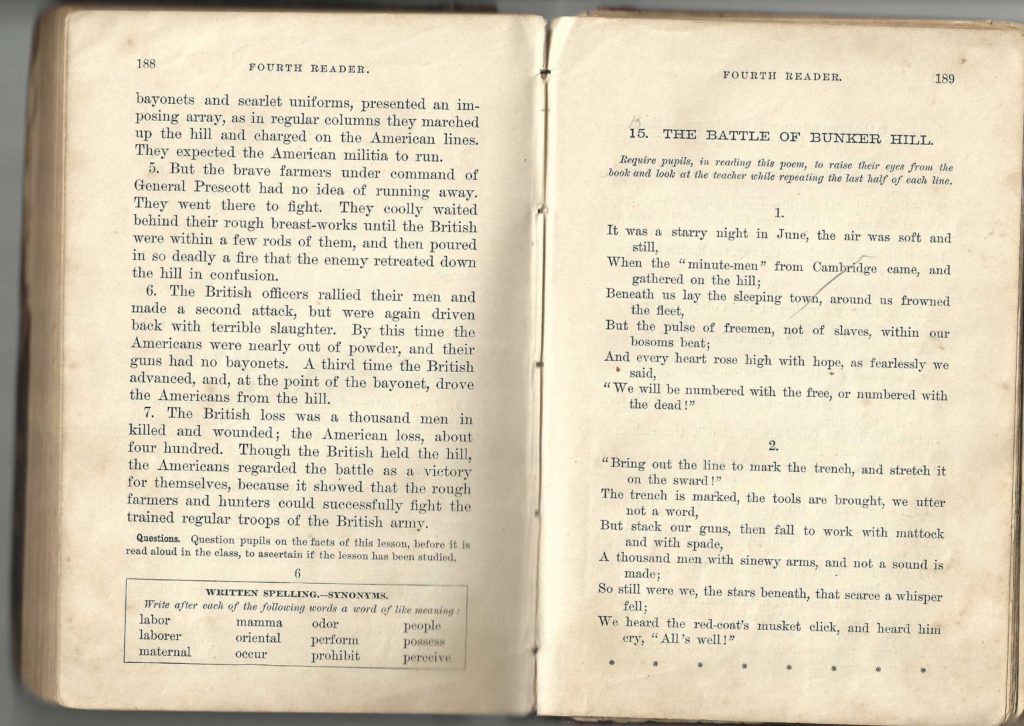 Things get even more sophisticated with the Fifth Reader. Interestingly, as with the book above, the first reading is Franklin-centric. This time, rather than being about Franklin, it’s actually Franklin’s own words. The kids also learn the entirety of the scene in which Mark Antony speaks about Caesar. It went on so long that I just stopped scanning it. And finally, I picked an essay about astronomy that’s written in prose a 12th grader today would find challenging. Again, these are just random pages: 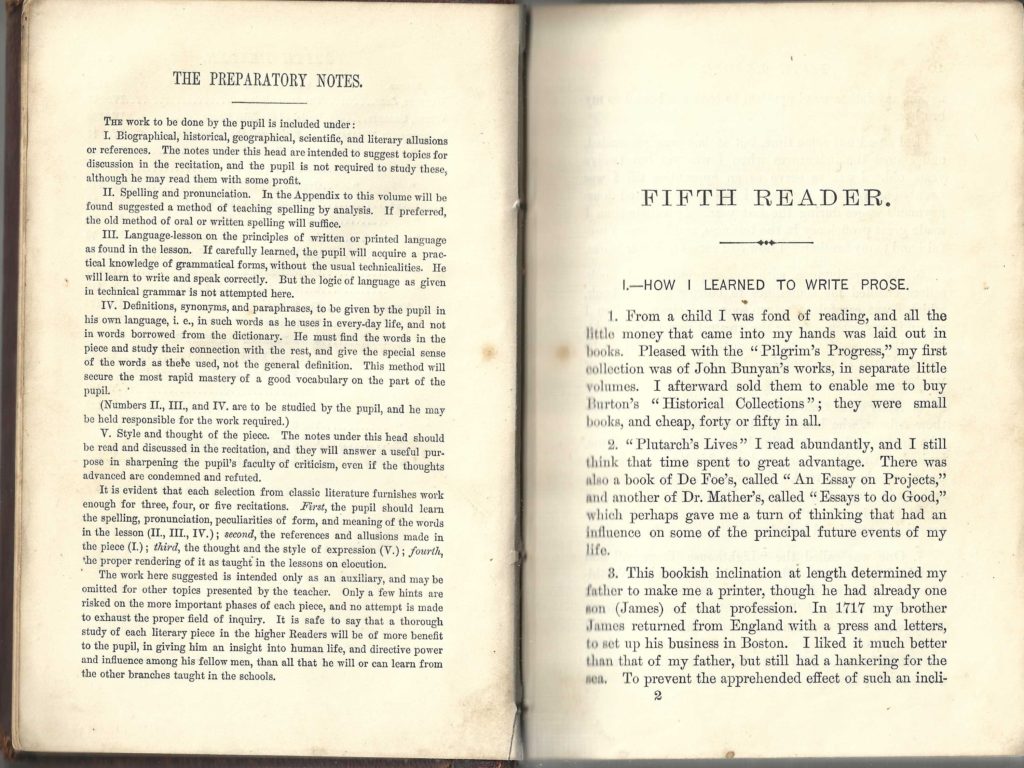 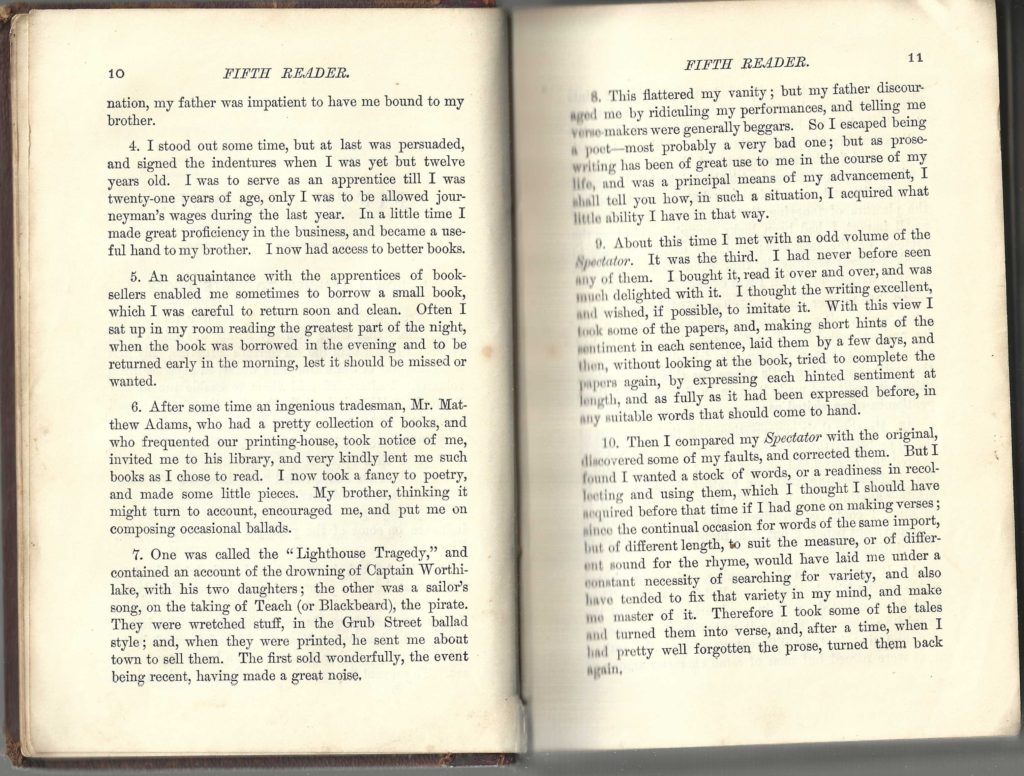 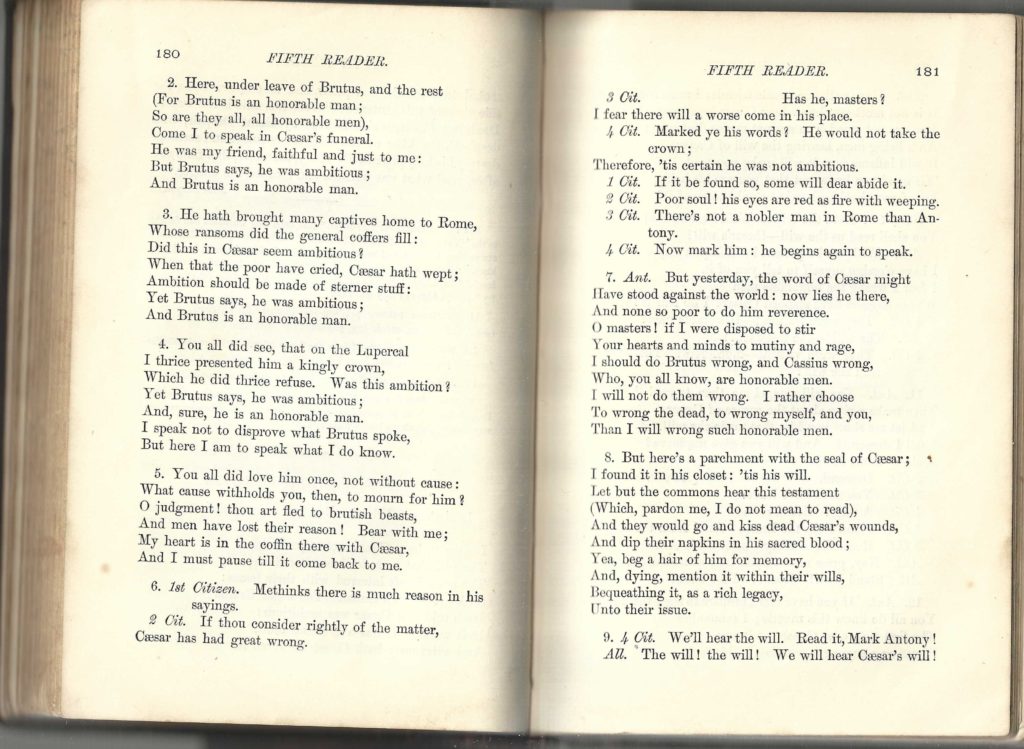 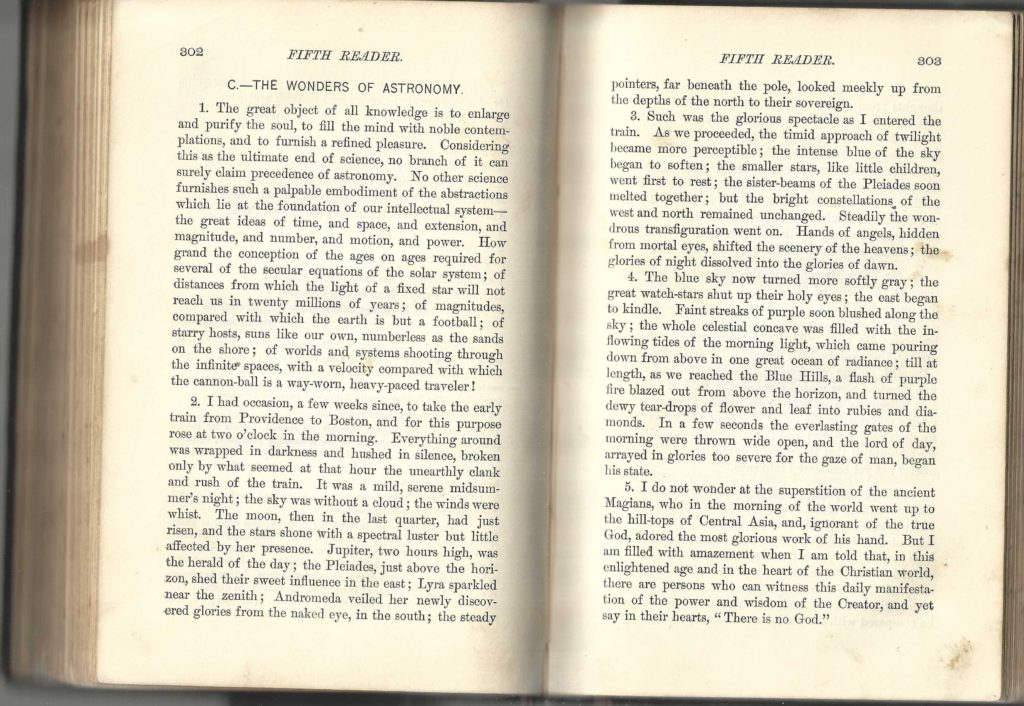 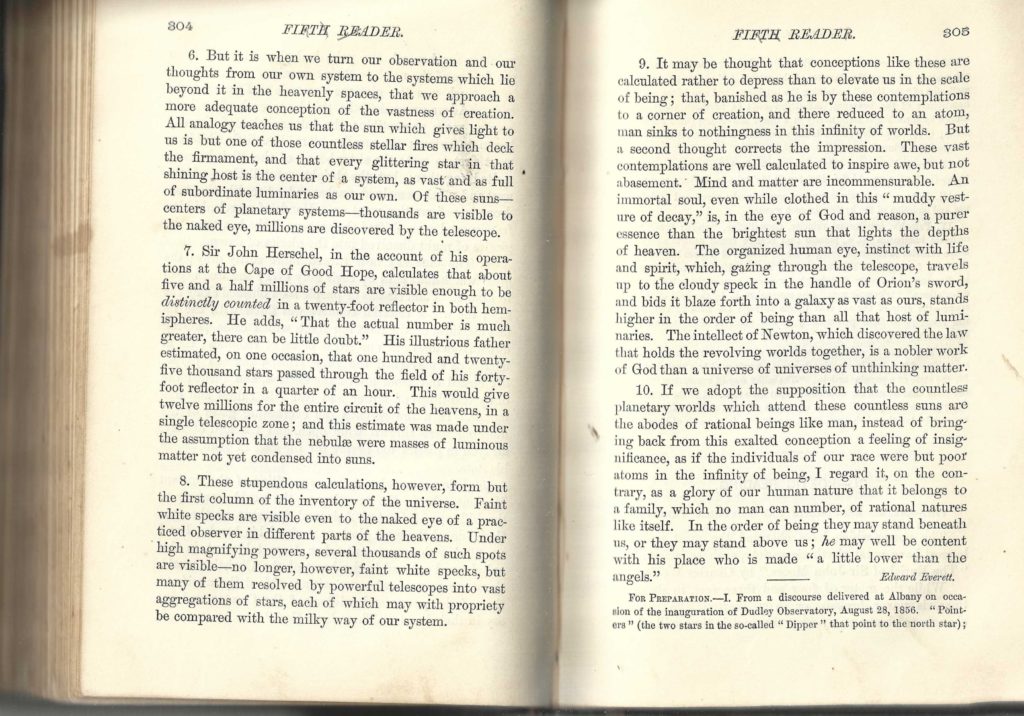 Next time you read about someone from the 19th century who had to drop had of school in fourth or fifth grade, it might surprise you to learn that, in many ways, that person was better educated than a high school or college graduate today. At least, that person was better educated in grammar, vocabulary, morals, and American history. I don’t have math workbooks but I’m willing to bet that their mathematical understanding might be more sophisticated too.

The modern education establishment has not been good for our children. Next time Jill Biden, with her education degree, demands to be called “Dr.” — an appellation we reserve for medical doctors — do remember that she’s part of an educational institution that means that our high school graduates are less educated than a 5th grader once was.