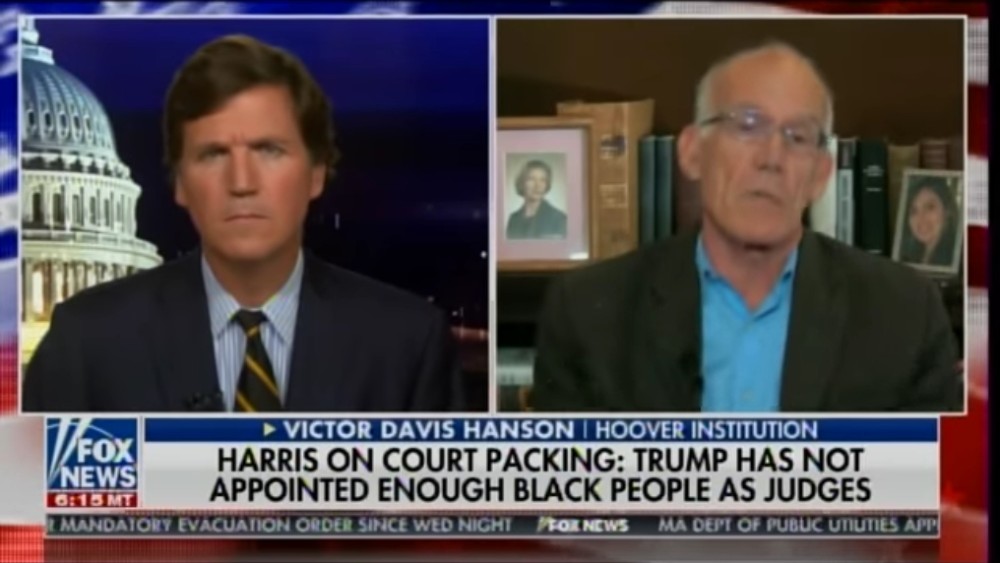 America is in the midst of a weird Marxist class war, with the upper classes and dispossessed rebelling against the working and middle classes.

Victor Davis Hanson was on Tucker Carlson on Thursday. Hanson is always interesting, but this time he knocked it out of the park and into the next county. What  he talked about was the fact that Trump represents ordinary Americans.

Usually when people say, “If I were Trump, I would say blah, blah, blah,” I’m thinking “yeah, yeah, whatever. I know what you’d say, but it’s Trump who figured out how to get into the White House on the first try.”

This time, though, when I listened to VDH, I realized that he was saying something extraordinarily important. This isn’t just the speech that Trump should make. Instead, this represents one of the most cogent statements I’ve heard about Trump, the leader, and his coalition, the everyday Americans. VDH makes patently clear that America is in the midst of a revolutionary class war, and one that the working- and true middle-class (as opposed to the “elite” upper middle class) must win if America is to survive:

If you can’t watch the video, Jim Hoft, at Gateway Pundit, has the transcript. I’ll just quote here the key language. The set-up was that VDH was talking about the fact that all debate moderators are biased. Every question they ask is posed as a gotcha to Trump (or Pence) and a love letter to Biden (or Harris).

So the question is what is Trump to do about this? There’s a 360 degree celebrities, and the academic world, and celebrities and the wealthy and elite of Silicon Valley and Wall Street. I think he has to emphasize that this election is on class it’s not on race!

And yes they don’t always have the correct mask or they don’t social distance but they keeping going for whom? They Zoom and the Skype class! They’re in their basements telemarketing or teleworking or whatever they do and making a lot of money. And then they’re hectoring everybody that they’re politically incorrect or they’re racist, or they’re mask is an inch too small or they were one inch closer.

And Trump has got to say, “I’m one with these people. I want to frack because that frees us from these Middle East quagmires. And gives your kids good wages or doesn’t send your kid to Afghanistan or Iraq.

I want to get out of the Green Deal ’cause I want you to have a job. I don’t want to have a lot of elites in the Bay Area to tell you how to live your life.

So it’s gotta be a class argument. And I think he’s got to say, “I’m one with you and I don’t have any apologies for getting sick.” That’s what the president’s supposed to do. You’re supposed to take risks. Meet foreign leaders. Bring foreign leaders into the White House. Crisscross the country.

And I’m even going to have a rally. And I might even get sick and take experimental drugs if I have to to get back on the job. I’m not going to stay in my basement and quarantine myself and isolate myself and pass judgments on others that you’re not willing to take the same risk. And I think that argument’s going to appeal to a lot of people.

I wanted to stand up and cheer when VDH was done.

And you know what’s really ironic? Since 1867, when Marx published Das Kapital, Marxists have been the ones who framed everything as class warfare. That’s part of why Marxism never really worked here in America the way it did in the rest of the world.

America, after all, didn’t have fixed classes and it always had economic fluidity. With hard work (and, yes, luck) you could make it in America — and then you’d really be something. In the Old World (Europe, Asia, Latin America, etc.), no matter how hard you worked, you couldn’t make it and, even if you made money, you were never “something” in those societies.

Because of the American resistance to class warfare, beginning in the 1960s, American leftists started to substitute race, sex, and sexual orientation for class. That is, instead of dividing America along economic lines, they divided it along immutable characteristics lines. By doing so, they created permanent fissures in society. The point, always, was to destroy constitutional government, the free market, and a liberty-oriented mindset, and replace it with pure statism: Rule by the iron hand of the so-called “expert.”

Ironically enough, this push, which started in and still has its center in, academia, managed to turn America into a class society. There were the university educated (look at our all Ivy League Supreme Court), and the “others,” the deplorables, the gun clutchers, etc. The computer revolution sped this class division, and the Wuhan virus has made perfectly plain how deep the divide had become. Let me reiterate what VDH said:

And yes they don’t always have the correct mask or they don’t social distance but they keeping going for whom? They Zoom and the Skype class! They’re in their basements telemarketing or teleworking or whatever they do and making a lot of money. And then they’re hectoring everybody that they’re politically incorrect or they’re racist, or they’re mask is an inch too small or they were one inch closer.

He’s absolutely right that this is the new American divide.

And let me tell you, speaking as a member of the Zoom and Skype class, we are nothing special. We’re useless. We can run computers and write legal briefs and be bossy Karens, but the world will run without us. It will not run without the truckers, and plumbers, and electricians, and soldiers, and mechanics, and road crews, and police officers, and on and on — all the practical people who keep our world moving. These practical people are Trump’s people — and the left is terrified because they know that, behind all their superior scolding, that they are nothing without Trump’s people.

Because they’re functionally useless, the educated leftists have gotten themselves an army of dispossessed people: The crazy Antifa mobs, the people trapped in the hellholes that are Democrat-runs slums, and the young people driven mad by their victim-centric, self-hating college curricula. It’s the “elite” classes (that is, the people with money and power) and the dispossessed lower classes and the crazies — none of whom contribute material benefits to society — who are battling it out against the people who make things run.

And just so you know, the monied class is betting serious money on getting Biden in the White House:

President Trump is promising four more years of low taxes, light regulation and a laser-focus on the stock market. Yet professionals on Wall Street are shunning Trump and funneling staggering amounts of money to his opponent.

The securities and investment industry donated just $10.5 million to Trump’s presidential campaign and outside groups aligned with it, according to a new tally by OpenSecrets. It has sent nearly five times as much cash, $51.1 million, to Democratic presidential nominee Joe Biden.

That means Trump is losing the fundraising race among Wall Streeters by a slightly greater magnitude than in 2016. During that cycle, former New York Senator Hillary Clinton and groups aligned with her raised $88 million from the securities and investment industry, while Trump took in just $20.8 million.

Ideologues will often act against their own best interests. America’s white collar, wealthy, college educated Democrats are so terrified of the constructive class that they are siding with the violent radicals and anarchists to take political power back from Trump. They’re riding the tiger, though, because just a few years ago, their foot soldiers were calling themselves the 99% and vowing to kill all the Wall Street people.

These are dangerous, crazy times. All I can do is urge you to go to the polls on November 3 and do everything you can to ensure that Trump and Congressional Republicans win in a landslide.