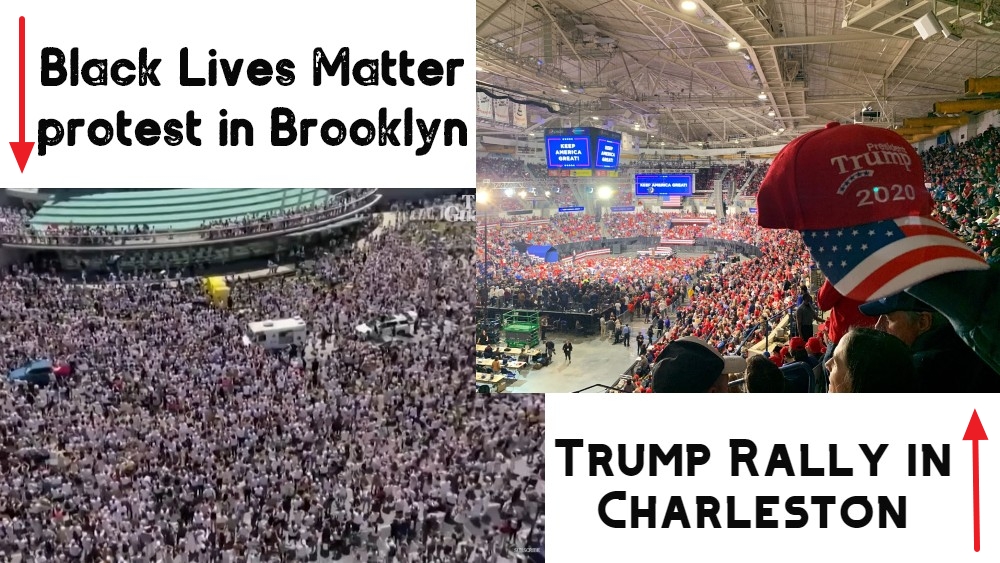 This post is not intended to rain on anyone’s parade, but I am getting concerned that we’re looking at the wrong voter enthusiasm metrics.

When I go to Real Clear Politics’s polling page with information for October 12, this is what comes up for the General Election polling:

As you can see, the polls show Biden running away with the election. For Trump supporters, these numbers are mystifying. First, they look remarkably like the numbers for 2016, when Hillary was beating the pants off of Trump in the lead-up to the election.

Second, we’re pretty sure that the Democrats have been so violent in their opposition to Trump that people are hiding information from the pollsters. After all, you don’t know if that nasal, mumbling person taking the poll is a BLM or Antifa supporter who is creating a database of people to harass. We know that’s what the BLM/Antifa types do. We saw it this August in Minneapolis when a person running for elected office terrorized a police chief’s family at their home:

“I’m a black man being terrorized by the f****** klansman right here,” Representative-elect Thompson shouted. “We are terrorized by the grand wizard. Ya’ll got the grand wizard living in your god**** neighborhood. All the klan exist in Hugo, Minnesota and it’s right here. Don’t run now. Don’t run now, racist white people. I’m here. Oh yeah, we pull up. We pull the f*** up.”

A radical lawyer and civil rights activist is under fire after threatening Kansas City police and their families in an speech addressing alleged police brutality last week. “You don’t think that we know where y’all live? You don’t think we don’t know where your children go to school?!” the attorney fumed in angry rant that was captured on video.

Stacy Shaw is the attorney for a pregnant black woman who was arrested at a KC gas station late last month. For the past 10 days, Shaw has been leading an “occupation” of City Hall in Kansas City, Missouri to protest the arrest.

“We are not being kind with you anymore,” said Shaw. “We have been courteous. We have been respectful, but we aren’t doing that anymore,” she warned.

Shaw said she is seeking to have the licenses of the peace officers involved in the arrest revoked, and then threatened to use her allies in the education system to turn their children against them.

These people are scary and the less they know about us the better. Not only might they be making the phone calls but even a legitimate polling outfit poses a risk. Even if the person on the other end of the phone isn’t an Antifa/BLM monster, the polling companies probably have eminently hackable databases.

Third, we point to voter enthusiasm, which is over the top for Trump. Even with the Wuhan virus, people are still turning up by the thousands for Trump rallies:

Wow. This was the line to get into the Trump Rally in Minden, Nevada today.

Here are the crowds gathering today in Florida:

SANFORD, FL — Seven hours ahead of President Trump’s rally, supporters line up to witness their candidate’s return to the campaign trail.

“He’s back and so are we,” one calls out. pic.twitter.com/XPLZZZZrtd

Then there was the amazing Miami car rally this past weekend, with 20,000-30,000 cars showing up. I believe that this consists only of a subclass of Trump supporters; namely, anti-communist Latin Americans:

So pathetic that they try to imitate everything Trump or his supporters do except it’s a bootleg and ghetto pic.twitter.com/xKDVIrVQm1

All over America, people are turning up for boat and car parades. How can we lose? just look at Biden’s Miami car parade, which got 15 cars:

So pathetic that they try to imitate everything Trump or his supporters do except it’s a bootleg and ghetto pic.twitter.com/xKDVIrVQm1

And there’s the now-famous footage of the Biden/Harris rally in Phoenix. No one showed up for that:

It’s the same all over. Nobody shows up to see Joe Biden and Kamala Harris:

This is a Biden rally.

THE. POLLS. ARE. GARBAGE. pic.twitter.com/oB8tGl0KZk

It occurred to me, though, that we’re looking at this wrong. The polls shouldn’t be comparing Trump to Biden, or even Trump enthusiasm to Biden enthusiasm. It’s clear that the energy on the left isn’t for Biden. Instead, the energy is against Trump and America. Joe is just the decomposing surrogate for a Democrat party that intends to un-do the great American spirit.

If that’s the real poll — Trump rallies v. BLM/Antifa rallies — we have to fight harder than ever. We absolutely cannot look at the “Trump v. Biden” metrics and think “Those polls are wrong. The real energy is behind Trump. Of course we’ll win.” Instead, we have to look at where leftist enthusiasm really lies. Then, we vote as if our lives depend on it (because they do) and we hope that the people who like getting on the streets are too disorganized or too anti-social to make it to the voting booth. The fact that they’re young militates against a big voter turnout. The fact that they’re unprincipled carries the threat that they won’t be too impressed with the rules against cheating.