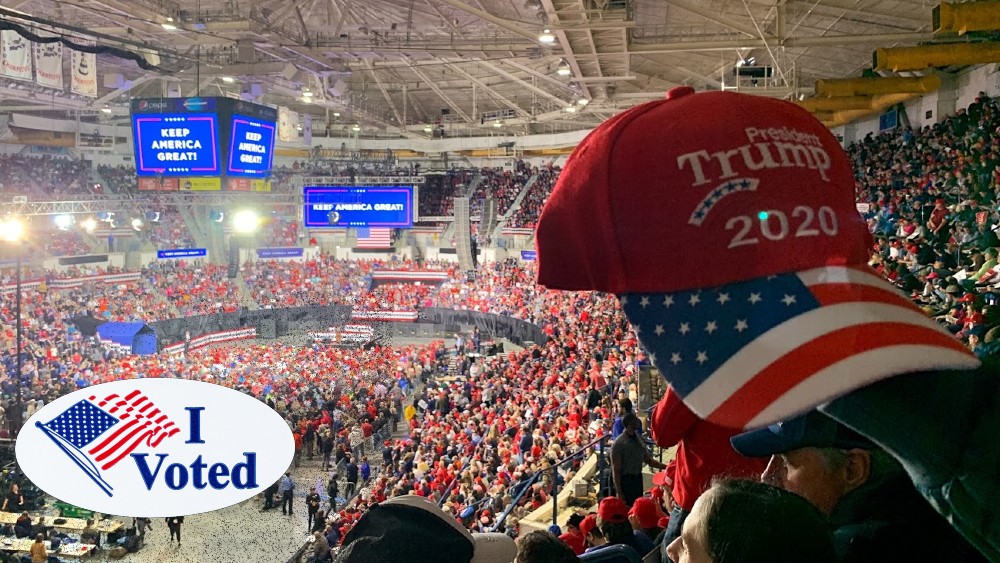 California may be home to Silicon Valley, but if you want sophisticated polling places, go to South Carolina and prepare to be amazed.

This is not a virtue-signaling “I voted” post, complete with a little sticker showing what a good citizen I am. (Although I did jazz up my photo from Trump’s Charleston rally by covering up the press corps with the “I voted” sticker.) Instead, I want to talk about how easy South Carolina makes voting. I was incredibly impressed with the early voting experience I had today.

To give context, I’ve voted all my life in California. I still remember when they’d give me a punch card, I’d insert the punch card in a frame that had the candidates and propositions running along the left side of the card, and then I’d take a little pin device and hope I punched the correct holes. If I knew I’d a mistake, I’d got a new card and start all over again. The problem, of course, was that it wasn’t easy to tell if you’d made a mistake. Those little holes could be confusing.

In the last few years, I’d go into my California polling place and the poll worker would look on a paper printout to determine if I was properly on the voter roles. He would then hand me a ballot that looks like a standardized test form, complete with little ovals to fill out. I’d go to my little voting booth and start filling out ovals, again hoping I didn’t make a mistake. If I made made a mistake, I’d get a new form and have to start all over. At least, though, I could proofread my votes after the fact and make sure I’d filled in the circles appropriately.

Afterwards, I’d hand my ballot to another poll worker who would slip it into a machine that looked either like a giant shredder or a giant photocopier. I was never really sure. I think that machine tabulated my votes, but it might just have collected ballots to take elsewhere.

This year was different. I went to a lovely park near my home. The rec center building was surrounded by parking places, so that wasn’t a problem. Also, along one side of the building, the polling place had a car line for mobility impaired people. Poll workers brought the ballots to them, so they never had to leave their car.

The line for early voting today had about 50 people in it (which was better than yesterday’s line, which I skipped, because it had about 100 people and it was hot outside). I assumed that I’d be waiting for an hour or so. Instead, I was signing in after about 15 minutes.

For sign-in, the poll workers sat behind computer monitors and were protected by big plastic screens. I handed over my ID, and the gal found me on the computer. After I confirmed my address, she had me sign a computer screen. There was disinfectant right there, which was great because, even before the Wuhan virus hit, I hate using my finger to sign screens that eight billion other people have touched.

Next, the poll worker gave me a blank slip of paper, about 4 inches wide and 8 inches long. She also gave me a little stick with a cotton swab on the top, like a Q-tip, for touching the computer screen.

At the well-lit voting booth (it was by a window), there was a computer monitor with a scanner next to it. I slid my blank piece of paper into the scanner, and then turned my attention to the screen. The first thing that came up was an offer to fill my ballot in on a party line basis. I said “yes,” because I’d already determined that, in each race, I was going to vote Republican all the way down. Having that “party-line” option was going to save time.

I wasn’t sure whether, having chosen the party-line option, I would be done, or if there was more. There was more — and rightly so, both because it gave me a chance to make sure I wanted to do straight party voting and because the school board choices were non-partisan.

With my party-line choice made, I pressed the “next” button with my cotton swab, which took me to the screen for selecting the president. Because I’d chosen the party line method, Donald Trump and Mike Pence were already highlighted. I pressed “next” over and over as the monitor showed me my congressional choices, my state legislature choices, and the various county positions. I could, at any time, have changed my vote away from the party preference but, of course, chose not to.

Once I’d manually tapped my last choices for the school board, and again tapped the “next” button, the monitor showed me the choices I had made and asked if I wanted to confirm that I was done. Everything was fine, so I pressed “finish.” That same blank sheet of paper that I’d put into the scanner slid back towards me, only this time it showed all my choices, along with computer code presumably containing the same information. (That’s something I had to take on faith.) I walked my ballot over to another scanner, and it was sucked in and instantly tabulated. Cool!

From start to finish, voting took about 30 minutes. The process was easy, transparent, and rather fun. I felt assured that my vote had been counted. I highly commend South Carolina’s voting procedures. They are impressive.