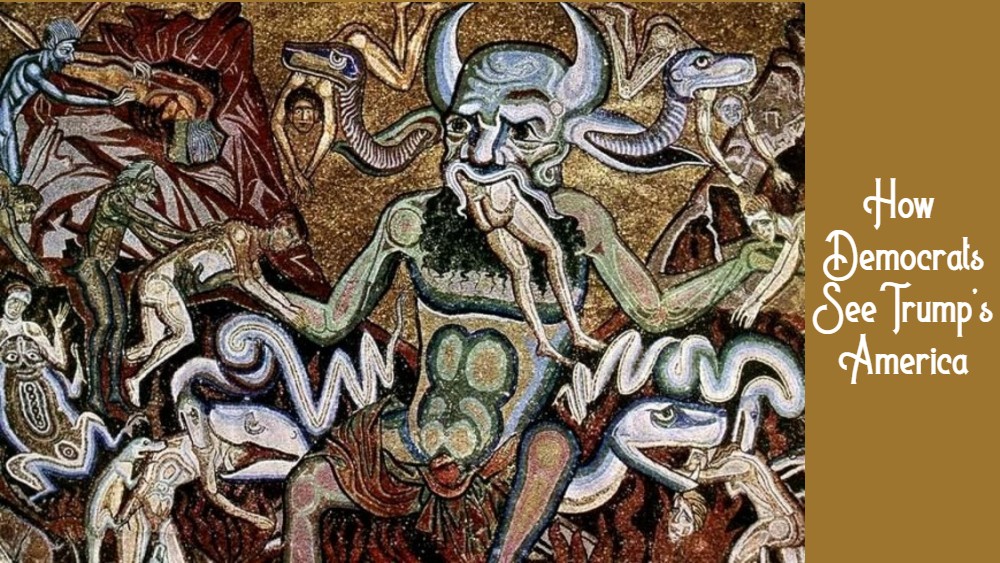 Whether it’s the MSM’s response to the Bobulinski claims or leftists still severing Facebook contacts, Democrats are immature narcissists.

In the run-up to the 2016 election, Scott Adams often spoke about the way in which Democrats and Republicans were watching two different movies about American life. In the Republican movie, Trump was someone who loved America, and wanted to bring back its best qualities (innovation, energy, national security, a low-corruption government), without reinstating its worst one (racism). In the Democrat movie, Trump was the second coming of Hitler, only worse because he was orange.

In a December 14, 2016 post — after the election but before the inauguration — Adams was reasonably certain that, once Trump settled into the job and didn’t cart gays off to gas chambers or reeducation camps, the two movies would start dovetailing:

About half of the citizens of the United States think they elected a president who will “drain the swamp” in Washington DC and negotiate good trade deals for the public. But the other half believes they are living in 1930s Germany and the next Hitler just came to office. Those are very different movies, yet we all sit in the same theater at the same time. It’s trippy.

Immediately after the election was decided, protests against Trump popped up in several cities. Protesting makes perfect sense if you think Hitler just came to power in your country. You must stop Hitler!

But the days went by and the protests fizzled out.

So why did the protests fizzle out? I find this question fascinating. So should you. Here are some explanations I can imagine:

1. Protesters decided that accepting Hitler as their leader was better than missing classes or skipping work.

2. Protesters have now seen enough counter-evidence to diminish their hallucination of living in 1930s Germany.

Adams placed his bet on option two — the counter-evidence diminishing the collective hallucination. He offered a laundry list of things that show that Trump is not Hitler. Examples are that he met with people who have different political viewpoints, he liked blacks and many seemed to like him, he didn’t seem to want world conquest, etc.

I believe that, in ordinary times, Adams would have been correct that, as Trump showed that he was not Hitler, people would have mellowed. And then, as he avoided wars, destroyed terrorism, fought for gay rights around the world, undid some of the terrible damage of Biden’s crime bill, improved the economy, and brought the real hope of peace to the Middle East, Democrats would have realized that their dystopian movie was wrong. They were (and are) in a good and happy movie.

That never happened, though. With really extraordinary cynicism, leftists in the government, the media, and academia created a series of hoaxes aimed at keeping Democrats in perpetual fear, even as their worst nightmares never materialized. The fake Muslim ban, the Russia hoax, the Fine People hoax, the fake impeachment, the fake kids in cages. . . . I can’t even remember all of the provably false allegations thrown at Trump.

And it worked because, contrary to what Scott Adams thought would happen, Democrats never had to confront reality. Their movie was an abridged, highly censored  version.

Take the news over the past two days about Tony Bobulinski, who credibly seems to have documents showing that Hunter was selling the Biden name to a corrupt energy company with ties to the Chinese government and military, that this happened while Biden was still Veep, that Joe was clearly aware of and involved in the negotiations, and that Joe expected to receive a 10% cut of the profits after they’d been laundered through Hunter. (See here and here.)

That’s a big story: The Vice President of the United States was trading on his influence to make massive sums of money. So this is how the New York Times covered Bobulinski’s claims (as of 7:27 p.m. ET today):

The Washington Post had a different approach. It acknowledged Bobulinski, only to savage him or announce that his claims are irrelevant: 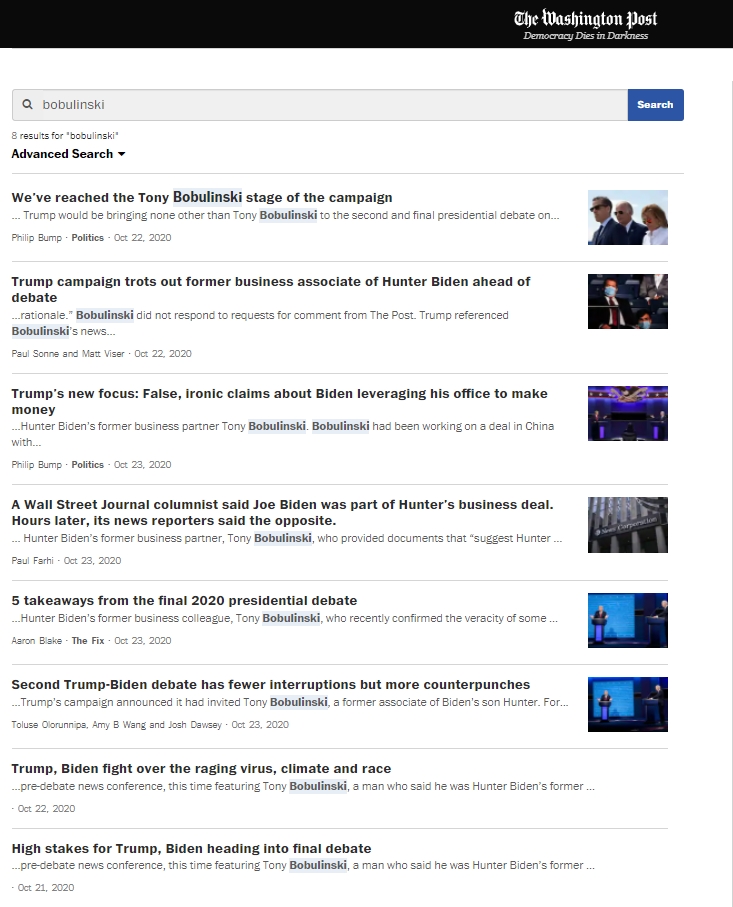 Meanwhile, NPR officially announced that it wouldn’t cover any information about Hunter Biden’s hard drive because it just didn’t see how that kind of thing could be important:

Why haven’t you seen any stories from NPR about the NY Post’s Hunter Biden story? Read more in this week’s newsletter➡️ https://t.co/CJesPgmGvo pic.twitter.com/jAi7PnpbZf

Carolyn Abbott writes: Someone please explain why NPR has apparently not reported on the Joe Biden, Hunter Biden story in the last week or so that Joe did know about Hunter’s business connections in Europe that Joe had previously denied having knowledge?

There are many, many red flags in that New York Post investigation. NPR Media Correspondent David Folkenflik detailed most of them here. Intelligence officials warn that Russia has been working overtime to keep the story of Hunter Biden in the spotlight. Even if Russia can’t be positively connected to this information, the story of how Trump associates Steve Bannon and Rudy Giuliani came into a copy of this computer hard drive has not been verified and seems suspect. And if that story could be verified, the NY Post did no forensic work to convince consumers that the emails and photos that are the basis for their report have not been altered.

But the biggest reason you haven’t heard much on NPR about the Post story is that the assertions don’t amount to much.

“We don’t want to waste our time on stories that are not really stories, and we don’t want to waste the listeners’ and readers’ time on stories that are just pure distractions,” NPR Managing Editor for News Terence Samuel told me. “And quite frankly, that’s where we ended up, this was … a politically driven event and we decided to treat it that way.”

The handful of stories that NPR has produced about the NY Post investigation have been limited to how Facebook and Twitter are restricting distribution of the story or how families of those seeking treatment for addiction are impacted by the portrayal of Hunter Biden’s struggle. — Kelly McBride

Since those words, the FBI has confirmed that the laptop is real and, as noted above, Bobulinski has come forward with corroborating evidence. That means, of course, that NPR is going to report on things, right? You tell me:

By the way, this was the first time I’d seen one of those NPR newsletters so I had no idea what an astonishingly partisan document it is. Despite the fact that “National Public” Radio receives money from the U.S. taxpayers, it doesn’t even pretend that it’s not an active arm of the Democrat party. And it’s no defense to say, as the NPR and PBS crowd always do, that the public money is the smallest part of NPR and PBS budgets. To the extent these outlets receive any public money, and advertise themselves as “public,” I would argue that they have an obligation to be non-partisan.

Anyway, the media’s refusal to report honestly about President Trump and conservatives generally is why Democrats in America are still in the same state of heightened panic they experienced in 2016. Even though nothing they predicted has happened (blacks, Muslims, and gays have not been interned or murdered, the climate is cleaner than before, Trump hasn’t started any wars, the economy is booming, etc.), their media bubble has managed to keep them endlessly outraged.

I mention all this now because I was scrolling through Facebook and discovered that a gay high school classmate of mine is systematically unfriending anyone who votes for Trump. In other words, he was engaging with the same hysteria I saw on leftist Facebook pages 4 years ago, when the big fear was concentration camps and nuclear holocaust. (I kept quiet about my Trump support because I like to see what’s on Democrat feeds. Unlike Democrats, I think it’s important not to live in an information silo.)

His post has received 58 likes, hearts, or “I care” responses over the last six hours, many from others with whom I attended high school. In other words, these are people I’ve known forever, some of whom were quite nice (including the guy who’s cutting people out of his life). Many of those who commented approvingly echoed the guy’s original statement. Yes, they too will unfriend or be unfriended by anyone who isn’t on the “Trump=Hitler” train. Once person even boasted about disowning family members and many wished ill upon Trump and his supporters.

It was a hate fest. Which is why my favorite comment came from someone who blamed Trump for the fact that all these good Democrats were forced to cut people out of their lives and their Facebook feed: “It’s so gross how we can’t respect each other anymore,” he wrote. He then added words that boil down to this: If you still like Trump, you’re evil.

This is what narcissism looks like. For a larger example of the same line of thinking, there’s a tragic story out Texas, where a man murdered his much younger wife because he believed she was cheating on him. Afterward, he made a video that he posted on YouTube in which he “apologized” to their daughter (emphasis mine):

‘I’m recording this because I want my daughter to know that I love you. I’m so sorry that I’ve done this. I want you to know that you mean everything to me.

‘I didn’t choose this. Your mom chose this. She’s been cheating on me for a long time.

‘I have audio of her talking to other guys. I didn’t do nothing wrong to her,’ he said.

That’s how narcissists work — they project their negative thoughts and behaviors onto their victims. I didn’t murder her; she forced me to kill her by hurting my ego.

And so these smug Democrats say, “I’m not being hateful. They forced me to cut them off and denigrate them because they don’t share my political beliefs.”

Narcissism is a profoundly immature thought process. A healthy, mature ego leaves narcissism behind after early adolescence. It’s extremely disturbing to see an entire political party locked into the mindset of a 13-year-old.

This is true whether it’s media outlets pretending bad things don’t exist, blindly attacking their enemy, or justifying their hatred for people who disagree with them by saying the equivalent of “I hit you back first.” I hope that, one day, they are able to break free of this perpetual adolescence. It doesn’t bode well for the country if 49% of the voters are the functional equivalent of a high-attitude, low-rationality teenager who reads only dystopian fiction and then thinks it’s real.