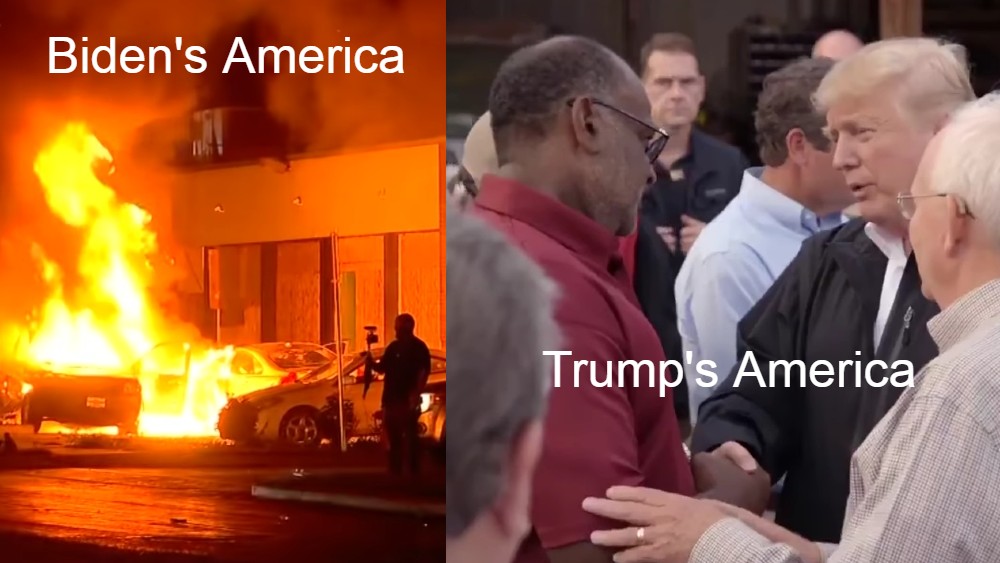 The Democrats are escalating their threats whether Trump wins or loses. No matter what they say, we’re safer if (when) Trump wins.

This post looks at the two apocalyptic scenarios that Democrats have threatened. One scenario occurs if the Democrats win next week, taking both the White House and Congress. The other scenario occurs if the Democrats lose next week, whether their loss means only that Trump retains the White House, or if the loss extends to Congress (losing again in the Senate and, God willing, losing in the House too).

In 2016, President Trump promised Americans that, if he was elected and given the opportunity, he would nominate for the Supreme Court judges who believe in judicial restraint, rather than judicial activism. He kept that promise when he nominated Amy Coney Barrett.

Cocaine Mitch knew that he could assemble a majority to vote for Amy Coney Barrett. He also knew that, throughout American history, when the president and the Senate are from the same party, justices have been seated on the Supreme Court even if an election is drawing near. Indeed, John Adams put Chief Justice John Marshall on the Supreme Court after he had already lost the election to Jefferson.

What happened in the Senate over the past week, culminating in Barrett’s swearing-in tonight, was consistent with the letter and spirit of the Constitution, with Trump’s promise to voters, and with historic precedent. You wouldn’t know that, though, to listen to the hysterical condemnations from Democrat Senators.

Elizabeth Warren, who is a fraud, a liar and, like Hillary,  someone who substitutes wonkery for a signal lack of intelligence, claimed that this historically and constitutionally correct process was “stealing” a seat on the bench:

I’m heading to the Senate floor now to talk about Donald Trump and Senate Republicans’ corrupt and illegitimate process to steal a Supreme Court seat, and why Amy Coney Barrett will help hand our courts to the rich and powerful. Tune in live. https://t.co/fbEo5wmz5o

Richard Blumenthal, the fraud who lied about his Vietnam service, opted to scare Americans by saying that Barrett’s ascension means they’re all going to die. What you see here is what happens when a congress critter realizes that he has to convince the voters, rather than a handful of leftist justices, to change America’s legal policies and social issues:

A thread by Richard Blumenthal

There is a clear & present danger of a humanitarian, moral, & constitutional crisis, as the Supreme Court shifts radically to the right & prepares to strike down laws vital to health & American values. Americans across the country are scared & saddened tonight.

Families with sick children are scared they won’t be able to pay for their health care if the Affordable Care Act is struck down. Women are scared the Supreme Court will overturn Roe v. Wade & punish them for their decisions about when & whether to have children.

LGBTQ+ couples are scared that their loving relationships will no longer be protected by law. All Americans should be scared of a Supreme Court that would supplant the electoral will of the people with the votes of Republican-appointed justices.

To every person who is worried about what your future looks like under this SCOTUS: I’ll never stop fighting for you. Breaking the rules/norms to appoint activist judges who legislate from the bench is undemocratic & unacceptable. Keep on standing up & speaking out.

Chuck Schumer, like the thug he’s always been, included threats with his apocalyptic rhetoric:

I want to be very clear with Republican colleagues. You may win this vote, and Amy Coney Barrett may become the next associate justice of the Supreme Court, but you will never, never get your credibility back. And the next time the American people give Democrats a majority in this chamber, you will have forfeited the right to tell us how to run that majority.

“You walk a perilous road. I know that you think this will eventually blow over, but you’re wrong. The American people will never forget this blatant act of bad faith,” he added.

Schumer cited an alleged quote from Senate Majority Leader Mitch McConnell: “‘You’ll regret this,’ he told Democrats once, ‘And you may regret it — this a lot sooner than you think.’”

“Listen to those words,” Schumer said. “‘You’ll regret this, and you may regret it a lot sooner than you think.’ I would change just one word. My colleagues may regret this for a lot longer than they think.”

Schumer called Barrett’s planned confirmation vote a “sordid chapter” in the history of the Senate and the Supreme Court, and then delivered more dark messages.

“My deepest and greatest sadness is for the American people. Generations yet unborn will suffer the consequences of this nomination,” he said.

He also said Monday would “go down as one of the darkest days in the 231-year history of the United States Senate.”

Let me reiterate that everything the President and Senate did was consistent with the Constitution and with historical precedent going back more than 200 years.

We all know what’s behind Schumer’s threats: If Biden wins and the Senate comes in on his coattails, the Democrats have given themselves permission to:

Once having taken the above steps, the sky’s the limits for Democrats. Their wish-list is a done deal. Think of a Democrat initiative and it will happen:

None of the above is made up. It is, instead, an amalgam of things that Democrats have already done, have tried to do, or have promised to do.

And those are just the things that come to the front of my mind as I write. I’m sure you can easily think of other issues that will become part of the American fabric in a brave, new one-party America.

That’s if Democrats win next week.

If Democrats lose next week, they’ve promised to escalate the street violence that rocked America after George Floyd overdosed at the end of May. I’ve been stocking up on what I call “earthquake supplies” owing to my years in California. I feel that every household should be self-sustaining for at least two weeks.

The only consolation is that, if Trump wins, he won’t have any hesitation this time around in calling out the National Guard to restore order. In the lead-up to the election, Trump had to be careful not to feed the Democrat narrative that the most restrained president in modern history was an authoritarian. (And yes, I meant restrained. He’s been trying hard to shrink the federal government, he resisted using the Wuhan virus to expand his power, and he hasn’t started any wars.)

Additionally, I’ve long suspected that Trump let blue cities riot over the summer because he was giving some bite to H.L. Mencken’s definition of democracy:

Democracy is the theory that the common people know what they want, and deserve to get it good and hard.

Those cities that consistently elected Democrat party governance got a good look at the practical consequences of that decision. (Seattle, which seems poised to elect a Marxist, apparently wants still more.) After the election, though, Trump doesn’t need to make that point. Instead, he can bring stability and peace to American cities.

The polls are tightening, which is good. The WalkAway and Blexit movements seem to be shifting a lot of traditionally Democrat voters to Trump. Trump’s rallies and the spontaneous car and boat parades promise extraordinary voter enthusiasm:

All of these are good signs. Of course, as I once suggested, Biden rallies aren’t the place you look for leftist voter enthusiasm. Instead, look to the George Floyd protests. However, as others have pointed out, protesters aren’t necessarily voters. Moreover, the biggest protests were in states that are unlikely in any event to vote for Trump.

But here’s something you should do to ensure a Trump sweep. I’m not going to tell you to vote. You already know that. Instead, following the lead from Dan Bongino, I’m going to tell you to vote early. There are no surprises coming about Trump. As I’ve said before, he’s had his daily colonoscopies from the Deep State and he is clean as a whistle. Nothing that comes down the pike will change your mind.

But in this year of what promises to be extraordinary voter turnout with Wuhan virus craziness as a backdrop, you don’t want to be the person who has to wait five hours at the polls to cast your vote. Or, even worse, you don’t want to be the person who, after waiting five hours, gets turned away because the polls are shutting down. Go vote tomorrow. Or on Wednesday or Thursday. Don’t wait. What if (and I don’t mean to ill-wish you), but what if your car breaks down on election day or your polling location gets flooded? Vote. Now. Immediately. Do It.

No matter how we look at it, things are going to be bad but there’s one thing that’s obvious: If Biden and Company win, things will be bad for years, decades, or forever, with the American experiment ending. If Trump wins, things will be bad for days, months, or weeks. We can handle that. Buy your supplies, vote, and then hunker down, waiting for the good times to happen.