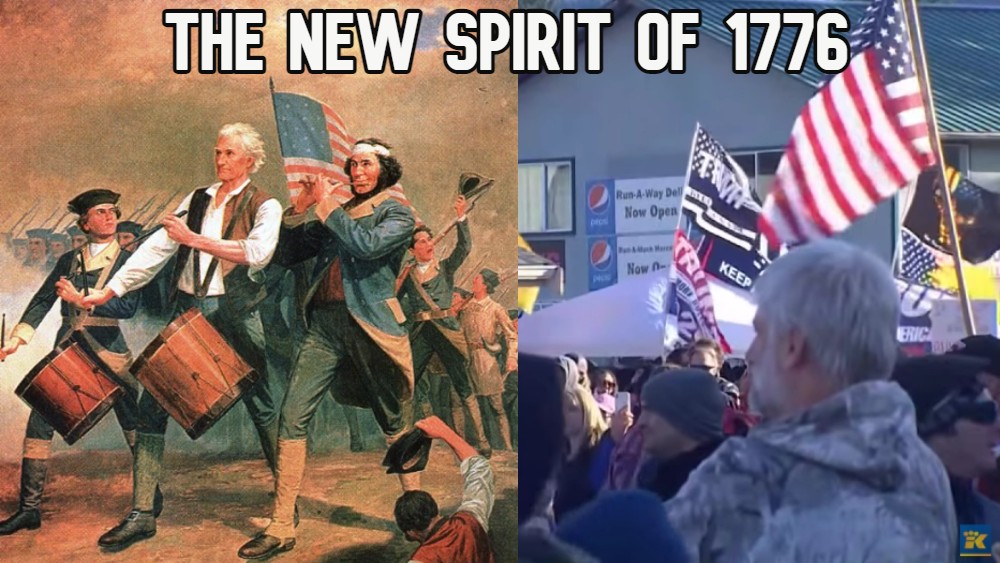 Democrats and monopartiers think they’ve won today but they may have sown the wind and will reap the whirlwind, by waking the sleeping giant.

There are a few points I find myself making in my responses to emails from worried and unhappy people. There’s a common thread I’m seeing in my own writing, so I thought I’d see if I could pull it all together in this post.

Here’s a preliminary but important point: Don’t give in to depression and despair. Both of those are emotions that encourage passivity.

No matter what is coming down the pike, we are effective only if we’re energized. In that regard, I have to give the leftists credit for keeping anger as their battery power for four endless years.

We constitutional patriots are going to do it differently: We’re going to combine anger at a fraudulent election process with optimism and patriotism. That mixture of righteousness and the happy warrior spirit is the source of true power. It will keep us going whether our fight ends with Trump’s second inauguration or whether we keep the American flame burning until Trump’s second election or the election of any one of a number of extraordinary conservative young people coming up in America today.

And now for my sleeping giant point: A lot of people despair that not enough Americans, including disappointed Trump voters, will act going forward. Instead, they will become the numbed vassals of the tech tyrants and our new Chinese overlords.

I think that the people worrying about this outcome aren’t taking into account the huge efforts Democrats and other members of the monoparty (more on that monoparty, below), all of whom control the Deep State, have made to wake that sleeping American giant. Up until these efforts, the reality was that working- and middle-class people were not activists and were the last people to man their barricades. They simply had too much to lose.

As I’ve said over and over for years, people with mortgages, car payments, apartment rent, dependents, retirement funds and, most important, a stable or rising standard of living will never rock the boat. This is why, incidentally, ordinary FBI agents were perfectly agreeable when they saw their superiors engage in the Russia hoax. Even if their consciences bothered them, their mortgages and 401K plans bothered them more.

But what happens when the party about to take complete political power deliberately destroys the working and middle classes? And note, please, that when I say “the party,” I mean the monoparty. This isn’t just Democrats, although it’s mostly Democrats. It includes RINOS, NeverTrumpers, and monoparty “Republicans” who go where the money and power are.

So I ask again, what happens when this monoparty engages in politics that are manifestly intended to destroy the working- and middle-classes while enriching preferred constituents? And I’m not just talking here about the lockdowns, which wiped out American restaurants (bastion of family businesses), mom-and-pop stores, hair salons, etc. And it’s not just that these policies, by shutting down ordinary businesses and otherwise trapping people in their homes, enormously enriched the big retailers (Walmart, Amazon, etc.) and the tech tyrants (Microsoft, Google, Facebook, etc.).

Instead, I’m also talking about Nancy Pelosi admitting she refused to agree to another stimulus bill because it would have benefitted Trump, not Biden. And Oregon’s unconstitutional decision to use Wuhan virus relief money only to benefit minorities, not similarly situated non-minorities. And the way politicians (mostly Dems, but also a few Republicans) have been flouting their own rules, as if to rub everyone’s face into the way they’re being destroyed. And the AMA’s decision, after hundreds of thousands are claimed to have died from the Wuhan virus (numbers I question), to announce suddenly that, with Joe Biden heading for the White House, hydroxychloroquine is now an approved medicine. If that was as politically driven a decision as it appears, the members of the AMA are mass murderers. And I’m talking about Bill Gates placidly announcing that the lockdowns should continue into 2022 just to make sure everything is his version of safe. And I’m sure you can come up with your own examples of the monoparty not just putting its collective thumb on the scale, but doing so blatantly and with glee.

We’re seeing a perfect storm here: The monoparty (mostly Democrats) have engaged in policies that have destroyed, and are destroying, everything that kept working- and middle-class people stable and non-rebellious. Not only that, they’ve done so in the most offensive ways possible, continuously reminding these same working- and middle-class people that, even as their lives are being ruined, the protected classes are subject to different rules and are doing just fine, thank you very much. They’ve also worked hard to sow racial divisions, so that Americans cannot come together to fight this oligarchy. And just to ice that toxic cake, this whole lockdown might have been stopped instantly if the monoparty hadn’t decided that a medicine Trump recommended must instantly be treated like poison.

And then, on top of it all, to gild the icing on that toxic cake (yeah, yeah, metaphors run amok), the monoparty commits blatant election fraud to push into the White House a man who never left his basement, who inspired no enthusiasm, who had negative coattails, who has a 48-year record of corruption and stupidity, who pimped out his son to America’s geopolitical and economy enemies for cash, who dances to China’s tune, and who is drifting into senility.

People who have nothing left to lose, and who see unworthy people stealing everything they have, are a people ripe for rebellion. These are not college students with imaginary grievances or mentally-ill (and often criminally perverted) Antifa types who are ripe for a riot or some fun looting. Instead, these are people who responded to Pearl Harbor, or who rose up in the Warsaw Ghetto, or who fought the most powerful military in the world in the second half of the 18th century, or who engaged in the Battle of Athens.

Right now, the corrupt American media, working with the tech tyrants, is ridiculing these Americans, hiding information from them, and trying to brainwash them into thinking all is well. All is not well. I think bad things, really bad things, are going to happen.

I don’t say this with relish. I have always lived a protected, peaceful life, and I both hoped and assumed that my life would continue that way until I died in my bed of advanced age. I never wanted to replicate my parents’ experience of Depression, dislocation, and war. Even now, I still pray that, when these anguished, disenfranchised, dispossessed Americans rise up, they can still do so through our traditional, peaceful, democratic means: Freedom of speech, the ballot box, and the free market.

But I’m worried. I won’t lie to you. I’m very worried. Being worried, though, doesn’t mean I’m giving in to that despair I warned about at the top of this post. I’m going to do my bit, as best as I can through my writing, to be that happy warrior. As I see it, my job, using my skill, is to help America work it’s way back to a constitutionally-governed, free market, decent and moral nation, rather than a racially-riven, economic basket case, governed by a tech oligarchy beholden to China.

Look to Mossyrock, Washington, if you want to see how this begins: