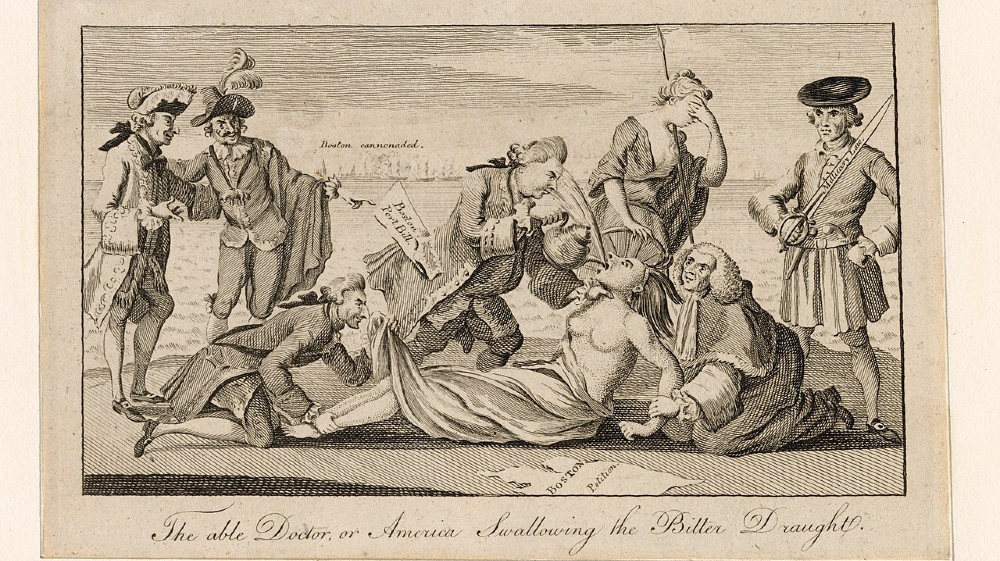 The Democrats are planning to destroy their political opponents.  History teaches that their plans to enact scorched earth against people already aggrieved will only radicalize half the population.

Beginning in 1761, Britain began to enact laws targeting its North American colonies.  Most famously, this involved “taxation without representation,” but in reality, many of the post-1761 laws, in their totality, violated many of the other ancient rights of British citizens. Examples included the right to be secure against general warrants, the right to a presumption of innocence in a court of law, and the right to a jury trial of one’s peers — all of which Admiralty Courts violated.  Things came to a head in 1773 when a colonial mob dumped East India Company tea into Boston Harbor rather than see it sold in Massachusetts colony, where it’s sale would have established a precedent that Britain’s Parliament could vote for internal taxes to be paid by its North American colonists.  That very controlled act of violence put King George III and Parliament on notice that the colonists did not intend to submit to unfair demands.

This left King George III with a choice.  He could come to terms with Britain’s North American colonies and treat his subjects there as equal citizens under the law, or he could try to drive them into submission.  Very unwisely, he chose the latter course.  At his direction, Britain’s Parliament devised and passed a series of four laws meant to punish and cow the colonists, particularly those in Massachusetts.  Those laws disenfranchised the colonists and stripped them of their rights to speak freely, to earn a living, and to govern themselves.  Those laws became collectively known in the colonies as the Intolerable Acts, and they set the stage for the bloodshed and insurrection that soon followed, first at Lexington and Concord, then at Bunker Hill.  Soon thereafter, it was the same in all of the original thirteen colonies.

It sure as hell looks like we are seeing a replay of history.

We have for years now lived in a nation where the left sees itself as above the law and the rest of America as below the protections of the law.  The only standards of conduct the left recognizes are double standards.  The left is treating conservatives as evil pariahs whom they would permanently drive from the public square — at the same time they take permanent political power.

It is laughable that the left (and FOX-f****-NEWS) is calling the massive and (actually) peaceful protest the other day on the Capitol Mall, after which about 1,000 people breached the capitol building, then left, as an “insurrection.”  The double standard those on the left are applying to the protests is breath-taking for its hypocrisy.  As John Solomon observes, the media and the progressive left, after a year of incredibly destructive BLM and ANTIFA riots, have “completely flipped the script” on what constitutes a dangerous riot.  For some perspective on that, Ace quotes From Willis Krumholz (@WillKrumholz):

Lots of people doing the “oh look at me, those bad Trump supporters” posts now. Today was unacceptable. Absolutely.

But what just happened? The Mayor of DC ordered police to stand down and a handful of idiots entered the Capitol. . . .

Just last night, a violent mob surrounded a Senators wife at home with their newborn baby. They tried to force themselves into the home. In the last four years, Congresspersons were shot at and Rand Paul and Steve Scalise were almost killed.

This year, whole cities were destroyed and cops were targeted and killed.

Today at the Capitol, a woman–unarmed–was shot and killed. Nobody cares, apparently.

If your outrage only flows in one direction, which is even true of many GOP people, you are not the solution.

Why are we drawing the line at office buildings where Congress works as opposed to people’s homes and businesses?

Whole city blocks were destroyed this summer. Anyone who isn’t equally incensed at both is not a patriot . . .

None the less, now less than two weeks before the inauguration of Joe Biden, the “insurrection” is being used to justify all manner of actions against President Trump and all conservatives.  To lead off, Crazy Nancy Pelosi is going behind Trump, attempting to limit his ability to act as President while at the same time demanding that Trump be removed from office or threatening another impeachment proceeding.  That, though, almost pales in comparison to the purges of the President and all conservatives — and Parler — by the tech monopolies.  Writes Andrea Widburg at American Thinker, after Twitter and Facebook banned the President, tech monopolies then began a “purge,”

At this point, some might be thinking that a lot of people have said for a long time that conservatives should leave those hostile, censorious platforms. There are free speech alternatives, most notably Parler (a Twitter alternative), Me-We (a Facebook alternative), Gab (another Twitter alternative), and Rumble (a YouTube alternative). Considering that we are the product, why in the world were we giving ourselves away for free?

And finally, on Friday, Trump apparently did go to Parler. The tech giants, though, were ready. Because Parler is a bulletin board, not a publisher, is does not moderate “parleys.” Google has therefore removed Parler from the App store for “user safety.” Apple is threatening to do the same unless Parler starts acting like the other tech companies and censors speech Democrats find offensive. Amazon is also making noises about deplatforming Parler.

In the words of Roger Simon, Welcome to West China.

And while that is going on, there are now countless examples of individual progressives licking their chops at the thought of destroying conservatives and attacking anyone who disagrees with them.  This is not limited to the fringe — it is part of the mainstream leftism.  For but one jaw-dropping example, you can’t get much more mainstream than the ABC News Political Director, Rick Klein, who called for the “cleansing” of all Trump supporters.

The reality is that the left’s efforts have yet to begin.  It seems clear, looking at Biden’s picks to occupy the DOJ, that we are going to see an Obama third term, only with perhaps more damage done by personnel who believe not in equality, but in victim status.  Moreover, I would not be surprised at all to find the DOJ attempting to define conservative speech as unlawful.  This is going to get very ugly, very quickly, and that is even before we get to removing the filibuster. adding two new reliably left-wing states, and packing the Supreme Court.  All of this will very quickly become “intolerable” to quite literally half the country whom progressives mean to destroy and cow in the exact same manner George III did when, in 1774, he signed into law the Intolerable Acts.  Does anyone who knows actual (not progressive rewritten) history expect different consequences to flow from such acts?

Lastly, a word on two incidents relating to the breach of the Capitol building.  One is the death of Officer Brian D. Sicknick, something the left is using to demonize the people who breached the Capitol.  Allegedly, the officer died because of injuries sustained during the “insurrection.”  Fine, tell us what the injuries were and why he died from them.  Every news story on this incident is less than forthcoming.  And while I have great sympathy for the fallen officer and his family, I likewise get the sense that the public is being manipulated about this incident.  My suspicion is that he died of a heart attack.

The second incident involves the murder of Ashli Babbitt, an unarmed woman and fourteen year Air Force veteran who was executed by someone inside the Capitol Building.  Since when are we using live ammunition to quell riots in this nation?  We should be demanding to know who fired this shot and what are all the surrounding circumstances.  This woman should not be forgotten.  Indeed, she should be made a martyr on par with Crispus Attucks.