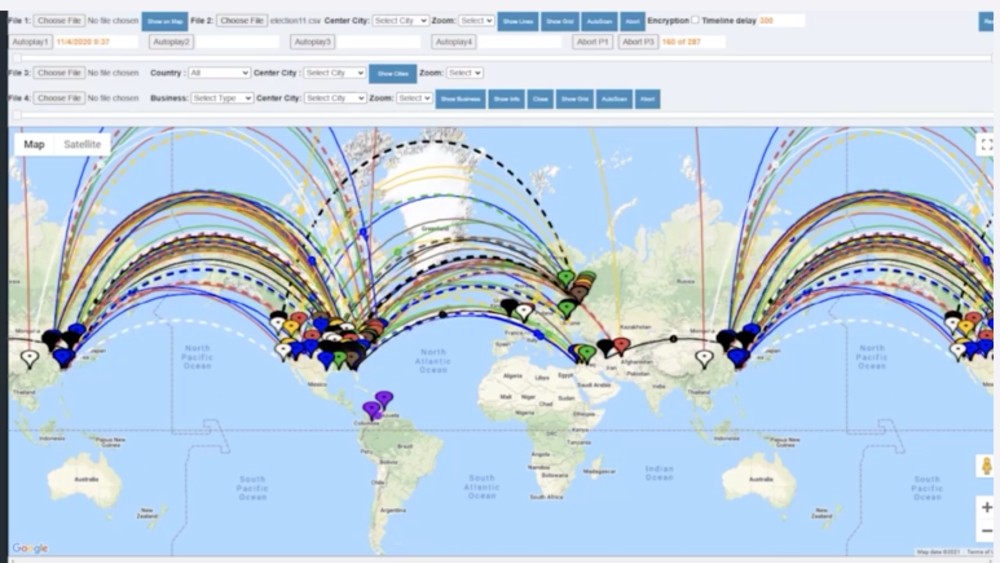 The Mike Lindell video, in addition to rehashing existing theories, throws a potential bombshell into the mix.

Yesterday, probably a dozen people emailed me to tell me about Mike Lindell’s video purporting to prove irrefutably that there was sufficient election fraud to change the election outcome. Accordingly, I started watching it and I was . . . bored. In the first half-hour, there wasn’t a single theory that I hadn’t heard before, for all the good they did. So, being perpetually short on time, I stopped watching.

This afternoon, though, another friend emailed and wrote, “Could you believe that information about China hacking the election?” I realized then that I’d stopped listening too soon.

At an hour and thirty-six minutes into the video, Mike interviews Mary Fanning, who claims that cyber-data experts began capturing traffic running between various secretaries of state’s offices in America and foreign countries. The primary foreign country was China, but there was also traffic running between Iran and some other players who are hostile to America. According to Fanning, they captured thousands of pages of data showing with absolute specificity that these foreign actors hacked into the various states’ voting data and changed the results, shifting millions of votes away from Donald Trump.

I captured that portion of the video. And yes, I know there’s a really irritating watermark, but I had to compress the video to get it to upload and, well, there you are:

Let me say at this point that I have no idea whether it’s true that it’s possible for cyber-data investigators to capture information with that precision. This could be an elaborate con, just as I suspect the whole Qanon phenomenon was.

But what if it’s not a con? If there really is irrefutable proof that China hacked the American election and put Biden in the White House? What then?

I called a friend of mine who is assiduously apolitical. She finds the subject depressing and boring so she avoids the news entirely. She knows the big stuff — that there was an election and Biden is now president but, otherwise, she really doesn’t want to know more. She’s not stupid (at all); just disinterested. I consider her “everywoman.” So, when I called her, this happened:

Me: If you learned that there was irrefutable proof that China interfered in the election and gave Trump votes to Biden, what do you think should happen?

Her: Well, I think it should go to the courts.

Me: No, assume it’s already been to the courts. The evidentiary hearing showed irrefutably that China hacked the election changing the results. What Americans really did was give Trump 80 million votes to Biden’s 68 million. What should happen then?

Me: Well, should Biden be removed from office because he didn’t actually win?

Her: Who would be president then?

Me: It would be Trump because he would, in fact, have won the election.

Her: This is very confusing. I have to think about this. I really don’t know.

I have to admit to having been a bit surprised by her confusion and diffidence at rewarding the election to the actual winner (that is, for now, the hypothetical actual winner, assuming the China hack is real). To me, it’s a no-brainer: If you have absolute proof that a foreign country interfered in America’s election, you undo the election result and put the right candidate into office. In addition, you announce that the country that interfered committed an act of war against you and then take it from there.

So, three questions for you guys:

UPDATE: This comment, if correct, is the kind of thing that concerns me about the information in the above video:

I would say the people making these videos are intentionally spreading disinformation to discredit legitimate election-fraud investigations. Chinese Internet hackers are attacking EVERYTHINIG connected to the Internet constantly and have been doing it for many years (at least 20 years). If you look at the incoming traffic to your home ISP connection you’ll see the same Chinese-sourced IP connections that are shown in the video.

UPDATE II: Having thought about the above concern, the only way to ensure that we’re not just looking at isolated examples of endless, ordinary attacks is if it’s indeed true that we know exactly what happened with those attacks — namely, that the attacks deleted Trump votes. I’m too technologically ignored to know if it’s possible not just to know that an attack occurred but to know it’s substantive effect.

UPDATE III: I heard from a friend of mine who is a computer expert who broke industrial fraud rings. Here’s what he has to say in answer to my questions:

So, two questions for you guys:

1. Is the type of information alleged in the Mike Lindell video for real? That is, is it possible to capture information with such precision, not just the pinging against the various computers, but also the actual vote changes that China allegedly performed?

Yes.  It is not only possible, it is something any cyber competent person could do.  The files Lindell showed are almost impossible to fake.  And there was a cross-check with the Antrim County in his presentation, something quickly said, and it was a very good confirmation point.  The stuff Lindell showed is pretty much impossible to fake at such a scale.  There are many ways to cross-check it to literally a single vote if it were investigated.

2. If this information is for real, and if China really did alter the outcome of the American election, what do you think should happen now?

If China really did this, which they did, I think we should just sit back and realize they could not do this without massive, coordinated U.S. security agency involvement.  Thus, I think, short of a rebellion, we are pretty much screwed.

You can read more here.