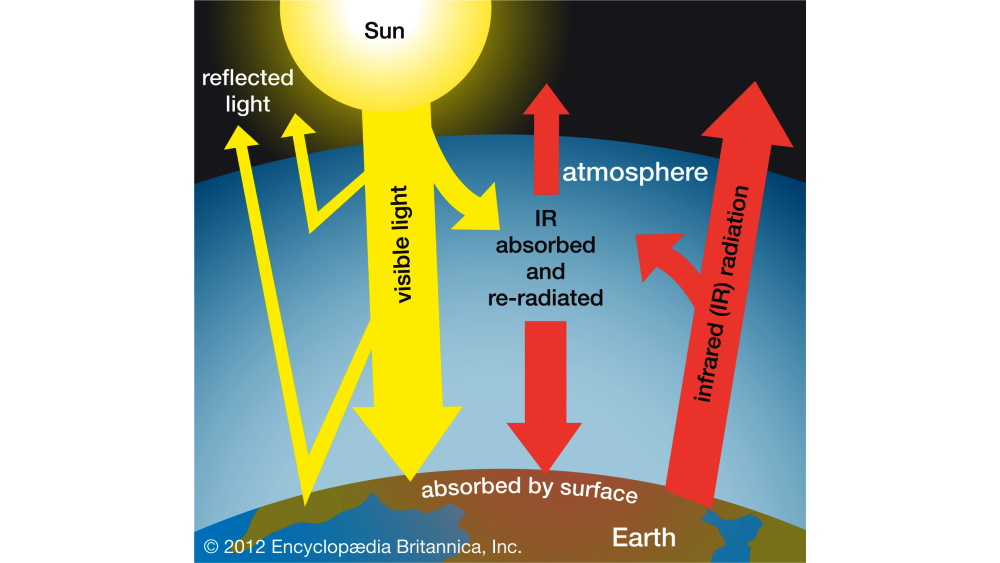 Previously, I looked at a tutorial model of the Earth’s greenhouse effect, like this one from Harvard University.

To review how these models are typically presented, an arrow of sunlight heats the surface, which in turn heats an overhead layer of greenhouse gases to the same temperature, so the layer radiates the same heat intensity downward, thus doubling the radiant energy impinging on the surface. If 240 watts per square meter is the initial intensity, then, another 240 is added to the surface, generating 480. This adding of radiant fluxes is an aspect of what is called Radiative Forcing. My focus the last time was that “watts” refer to an energy rate, so if 240 Joules per second are being spent (exiting to space) while 240 Joules per second are being earned (absorbed), there’s no room for a thermal savings account. The notion that gases like CO2 “trap heat” is therefore a myth.

This time the focus is on Radiative Forcing. The model alleges that surface heat excites the atmospheric layer, which then excites the surface. This means that the two bodies are thermally coupled. If this is the case, however, then the now-warmer surface should warm the layer even more, and we’d expect to see something like this.

Yet this does not occur in the model: After a single stroke of added warmth, communication ceases. This calls into question whether such an interaction can occur in the first place. To settle that question, go to Engineering Toolbox, scroll down to the Radiation Heat Transfer Calculator, enter the same temperature in both boxes, press Calculate, and see how many watts the “hot” one radiates to the “cold” one. I’ll wait.

As you see, two radiations from two equally heated bodies do not combine; they cancel out instead.

Ah, you may say, but that’s why the simple model is flawed: complex models avoid such an error.

Well no, complex models plow right into it.

Here I’ve inserted Celsius temperatures beside a few of the radiant fluxes marked on a complex greenhouse model. (To verify these temperatures, you can go to Science Facts – Temperature Conversions, set Albedo to 0, and enter any listed flux.)

The bottom left of the chart shows that the surface falls to 64 W/m² (note the up arrows) after initially gaining 161. The bottom right shows what happens when 333 is added to 64: 397. Nearly 1 watt is diverted, so the surface now radiates 396 at 16 degrees. This is radiative forcing, i.e., mindless addition, at work.

To the rest, here’s a take-home lesson: