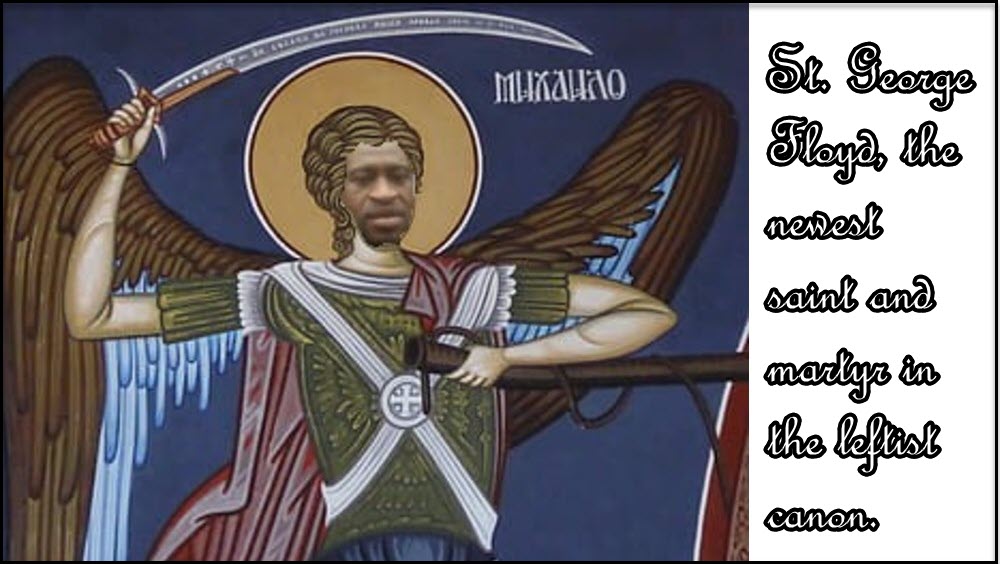 The left’s choices in martyrs and saints make sense only if martyrdom is measured by posthumous utility in propaganda, not moral courage.

Not so long ago, martyrs were people who made an affirmative decision to risk or even sacrifice their lives for the betterment of the world or simply for those around them. The early Christian faith is absolutely peppered with martyrs; that is, people who decided as a matter of conscience to place God ahead of the secular authorities and who died for that decision,

The first martyrs were those who stood up to the Romans in the years following Christ’s death: his brother, James; John the Baptist; the many apostles, including Paul, etc. As more people flocked to the banner of Christianity, the Roman authorities increased their crackdown on the faithful, torturing and killing them in a variety of inventive and awful ways. Polycarp of Smyrna, Perpetua and Felicity, St. Sebastian, Saint Agnes, St. Alban, and Euphemia, to name but a few.

By the Middle Ages, Christians in hostile lands (i.e., pagan and Muslim) were dying in droves for their faith. The Renaissance era marked a new era of martyrdom within Europe itself because the Protestant Reformation sparked civil strife and wars that saw Catholics slaughtering Protestants and Protestants slaughtering Catholics. Many died on the battlefield in straight-out religious warfare, but there were others, starting with Sir Thomas More, who made literal the statement “I’d rather die than do that.” The Catholic Church continued to identify its martyrs as it always had and the English Protestants responded with Foxe’s Book of Martyrs. Generations of children were raised on the idea of “noble sacrifice.”

Both words in that last phrase — noble sacrifice — deserve equal emphasis. It was not martyrdom if you weren’t making a principled stand for your beliefs.

World War II and the fight against communism brought a whole new round of martyrs. Many of them are unnamed but these were people of true principle who willingly put themselves in the way of death because to do anything else would have offended their most deeply held principles. They went to death camps when they didn’t have to, they hid Jews when doing so could be a death sentence, they found themselves in gulags because they refused to bow down to tyrants. Many were not sacrificing themselves for their faith. They were simply driven by an inner moral compass that made them secular martyrs.

In the military, martyrs who act out of faith or simply for other reasons, are called heroes and are recognized with the Medal of Honor or various other medals attesting to their willingness to sacrifice their lives to save others. Some make it home; many don’t.

And then there are the martyrs of the secular faith called the Democrat party (or social democrats or progressives). These are not martyrs in the traditional sense. Neither Christian faithful, nor WWII moral heroes, nor military heroes would recognize them. Significantly, they are not good people who bravely stared down death to save others or because their religious or moral principles were so strong they refused to bow down to tyranny.

Instead, these secular martyrs, to a man (or woman), were people who died because they were engaged in illegal acts. Many fought, not for principles or to save others, but to stay out of jail.

Trayvon Martin: Wannabe thug, high on a homemade drug, died as he tried to beat George Zimmerman to death.

Michael Brown: The “gentle giant,” engage in strong-arm robbery and then died as he wrestled with a police officer over the officer’s gun.

Breonna Taylor: Girlfriend and assistant to one of Louisville’s most wanted drug kingpins, who stood in the hallway next to her boyfriend as he fired at police who had been banging on the door and announcing their presence so loudly that the neighbors heard.

George Floyd: A repeat felon who pistol-whipped a pregnant woman during a home robbery, passed fake money and had ingested enough illegal drugs to kill an elephant.

Daunte Wright: A known criminal who beat up a woman to steal her money and was trying to escape from the police because he’d violated his parole and faced years in jail.

Jacob Blake: Credibly accused of rape and grabbing a knife when police shot him.

Rayshard Brookes: Convicted of child cruelty among other crimes, he died because he stole a taser from a police officer and was aiming him at the officer when the latter fired the deadly shot.

Ma’Khia Bryant: A 15-year-old who looked like a fully grown woman and was actively trying to stab two other fully grown teenagers with a huge knife when the police pulled up. Knife attacks are fully as deadly as gun attacks.

If you had to state an overriding principle for the death of these new martyrs, it would be to avoid arrest for their many crimes. It truly is a new kind of martyrdom.

But don’t be fooled by their criminal, selfish, and dangerous acts. They are saints in the Democrat party canon. Just listen to Nancy Pelosi:

Speaker Pelosi followed up with this tweet:https://t.co/jbh4pzMoNa

Yes, George Floyd, a violent felon, who was a repeat offender, who passed fake money and was overdosing on illegal drugs, and then fought the police, must properly be understood to have bravely sacrificed his life so that the Democrat party could riot across America to ensure a political victory in the 2020 election. He is the poster child for modern secular sainthood.

As an aside, Scott Johnson of Powerline, who attended the trial, believes that Floyd died of carbon monoxide poisoning because the police held him too close to their car’s exhaust. If that was indeed a contributing factor to Floyd’s death, it’s highly questionable whether that would have happened if the police hadn’t been surrounded by a large, loud, threatening crowd. In other words, if carbon monoxide really was the culprit, woke killed Floyd. [UPDATE: Scott Johnson got this right and I got it wrong  (of course) because I was reading too hastily — it was the defense that raised the carbon monoxide argument and the prosecution which talked about blood ox. What confuses me, though, is if the blood ox was so high, how can they say that Chauvin suffocated Floyd?]

That’s one of the things leftists do: They threaten lawyers who dare to help people accused of unpopular crimes. Eric Nelson deserves to be honored for his belief that, when the government is attacking someone in the criminal justice system — a system in which the government is essentially judge, jury, and executioner — that person, no matter how heinous the crime of which he’s accused, should have a knowledgeable friend at his side.