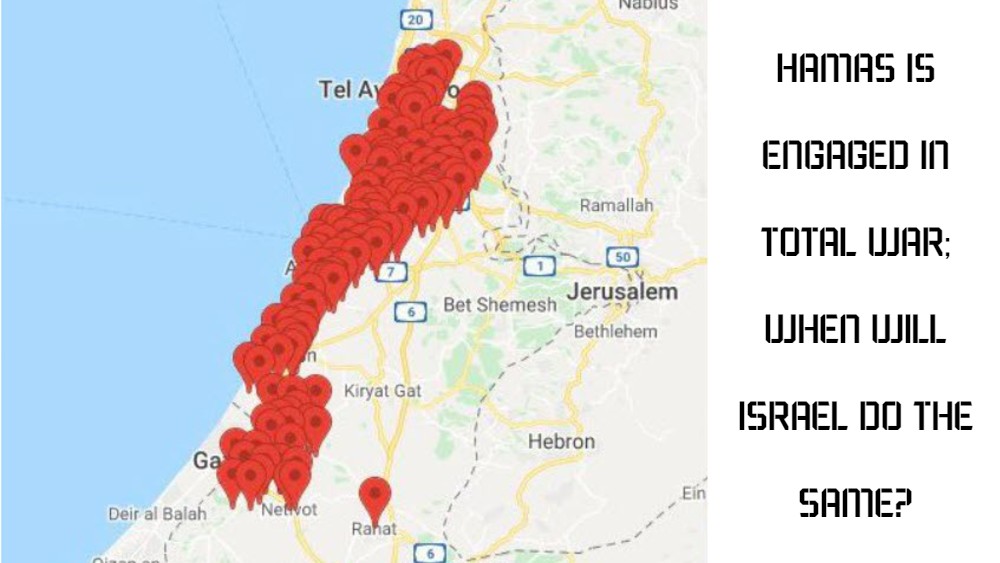 The latest war between Israel and Hamas again raises an important question: Is this the war that Israel will finally fight to win?

When I started college, I bought a used Volkswagen at a very good price from the widow of a family friend. It had been her husband’s car and she was not going to drive it again. For me, it was a good deal because, for financial reasons, I was going to commute rather than live on or near campus. Without the car, I would have had to rely on public transportation, and my commute, rather than taking 45 minutes each way, would have been double that time.

I owned that car for the next eight years. It was a terrible lemon. It left me stranded on the freeway innumerable times, including one of the worst rainstorms the early 1980s (a time of torrential rains) had to offer. The car broke down in the Sierras, the Rockies, and the heat of Texas. Speaking of Texas, not only did the car not have A/C, but the heating system broke and it blew hot air into the car all year long.

The problem was that I was in a situation that all poor people know: I could always scrape together the money to repair the car but I never had enough money to replace the car. And of course, that hole kept getting deeper because every repair further depleted any fund I might have started to buy a new car or, at least, a better, more reliable used car. By the end of my eight years of ownership, I had managed cumulatively to spend more money on that wreck of a vehicle than I would have spent had I just bought another car.

I keep thinking of my travails with that old car when I look back on Israel’s wars with the local Arabs.

An interlude here: I am no longer calling them the “Palestinians,” which gives them a historic claim to the land — by tying them to the Philistines or even the Palestinians from the Roman era —  that they utterly lack. The Arabs in Gaza, the West Bank, and Israel itself are Ottoman Empire Arabs who have been on the land for roughly 150 years. That’s a mere blip compared to the fact that Jews have had a continuous presence in Israel for over 4,000 years.

The concept of Palestinian nationalism was an idea that Yassir Arafat cooked up in the 1960s. Every time we use the word Palestinian, we are giving credence to that historic lie. Henceforth, I will refer to Israel’s enemies in Gaza, the West Bank, and Israel itself solely as Arabs — or perhaps, Jordanians, because that is their true nationality if they can be said to have one.

Interlude over. Back to my post about my old car and Israel’s approach to war.

Since the Israeli War of Independence, which was a purely existential war and which Israel had to fight to victory, Israel has never fought a war to the point of victory. Instead, in large part because of international pressure, Israel invariably fights wars to the point at which the Arabs demand a truce.

The international pressure on Israel for truces is always enormous. Brendan O’Neill points out that Israel is the only country in the world denied the right to self-defense. Others have made this point before but I think O’Neill does a particularly good job.

Biden, for example, is already pressuring Israel to end the violence, as if having thousands of rockets raining down on your entire country is just something you can walk away from. (To get an idea of the scope of the barrage, imagine rockets raining down on 1/3 of America, started at the entire Eastern seaboard and moving west.) The only infinitesimally small satisfaction I’m having from all of this is watching Democrat Zionist Jews on my social media grappling with the fact that, as I warned them, Biden wants to see Israel gone. Their struggles with cognitive dissonance amuse me.

But again, back to my main point about how all of the last 70 years of wars have ended….

Israel never conquers the Arabs. Or, to follow my car metaphor, she never buys a new car. Instead, by stopping short of victory, she does the equivalent of muddling along with my old car. She keeps doing temporary fixes that invariably fail, forcing her to engage in painful and costly repairs. Unlike my car, though, the cost isn’t just money. It’s blood. That’s a much higher cost.

And it’s not just Israeli blood. It’s Arab blood too. The first casualties of Hamas’s strike with a father and daughter (16 years old) who were Muslim Arab residents of Israel. A 5-year-old boy and a 21-year old soldier were killed. And Hamas has managed to kill more than 3 dozen Gaza residents with misfired rockets. The numbers will only go up.

The only way this will end is if Israel finally fights to victory. In the long run, a single victory will come at a lower cost for Israel and the surrounding Arabs than these endlessly dribbled out engagements.

Currently, Netanyahu is pretending that this time the Israelis will fight to win. Hamas, as it always does, is trying to get a truce that leaves it in a better position, even though Israel has greater military might. This article explains Hamas’s strategy:

The current major escalation between Israel and Hamas is a result of the terror organization’s long-term strategic vision aimed at ultimately crowning it as “Jerusalem’s defender,” both in the internal Palestinian arena and throughout the Middle East.

The move serves Hamas’ interests on multiple levels. On the Palestinian street, it positions Hamas as the dominant party in the struggle for leadership with Fatah. In the Arab world, it pushes back against Arab states engaged in normalization in Israel, by sending out the message to their publics that these countries are counterfeit defenders of Jerusalem, while Hamas is the genuine deal.

This creates long-term legitimacy for Hamas in the Arab world, reversing its isolation. It could see Hamas receive significant support and funding in the future, even if it currently risks the immediate goals of rebuilding Gaza now.

Hamas has, in fact, begun sending out feelers for a truce, as seen in statements calling on international intervention over Israel’s decision to stop fuel movement into Gaza.

Those truce efforts (which are really victory efforts) are continuing. This vaguely anti-Israel “news” story was just posted 30 minutes before I pasted it here:

Hamas sent a heavy barrage of rockets deep into Israel on Thursday, and Israel pounded Gaza with more airstrikes. The relentless escalation of hostilities came even as Egyptian negotiators held in-person talks with the two sides, intensifying efforts at mediation.

Many world leaders have condemned the violence and urged restraint, and a visit by Egyptian security officials was a significant development in international efforts to bring about a cease-fire; such efforts have been key to ending past rounds of fighting. The officials met first with Hamas leaders in Gaza before holding talks with the Israelis in Tel Aviv, two Egyptian intelligence officials said. They spoke on condition of anonymity because they were not authorized to talk to the press.

Netanyahu is engaged in the usual pretense of “holding firm”:

“It will take more time, but with great firmness … we will achieve our goal — to restore peace to the State of Israel,” he said.

The previous evening, Israeli TV reported Netanyahu’s Security Cabinet authorized a widening of the offensive that the military says has already hit 600 targets in Gaza.

Reading it, one might think, “Maybe this is it. Maybe this time Israel will fight the war to win, rather than hemorrhaging blood and lives for another several decades.” But then reality kicks in. Sooner or later, the international pressure will be too much to bear, coming as it will be pictures of those dead children the Arabs always provide for the cameras. At that point, as she always does, Israel will not take the steps necessary to change the dynamic (e.g., to buy that new car). Instead, she walks away, once again having achieved nothing other than keeping the rattletrap of current Israeli-Arab policy on the road for a little while longer.