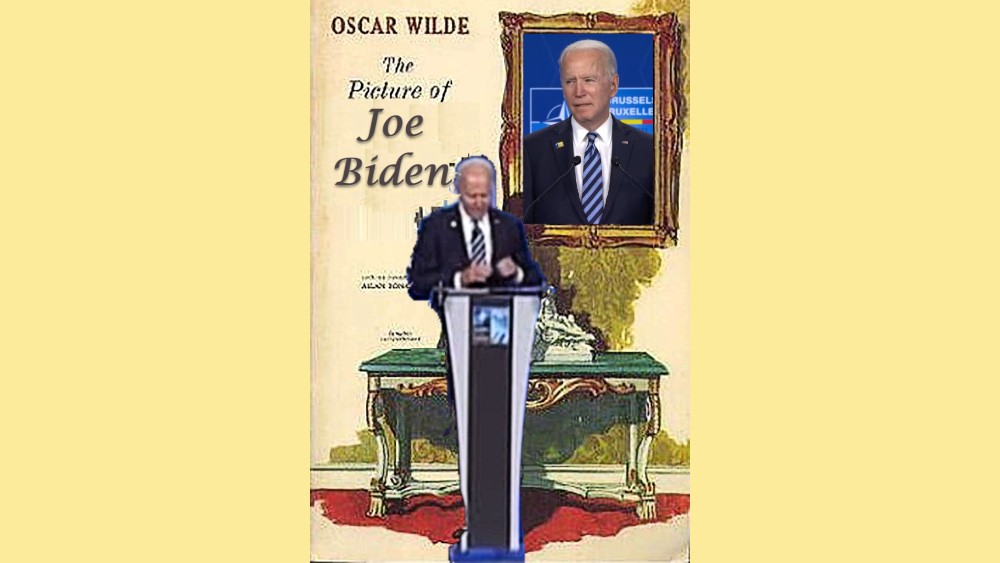 I’ve finally realized why I don’t feel the slightest guilt when I focus on Joe Biden’s dementia, something I wouldn’t do with anyone else.

I am not a naturally nice person, overflowing with the milk of human kindness. For me, it’s an effort and one that I make every minute of every day. One of the things that I’m grateful for about blogging is that it leads me to people in the public sphere who are actively engaged in destroying the noble American experiment. I believe they are legitimate targets for my verbal venom and can be mean about them n good conscience.

However, I have wondered of late whether I’m overdoing it by spitting that venom at Biden now that it’s plain for all to see that he’s succumbed to dementia. After all, dementia is a tragic process that turns once-vital people into husks of themselves, shorn of memory and personality. They are other people, something I saw with my mother, a formerly charming woman who vanished when a very unpleasant person took her place. In other words, they are no longer themselves.

Dementia is, perhaps, the cruelest aging process of them all. Yet that knowledge doesn’t prevent me from targeting Joe’s dementia, not because I fear greatly for my country with him at the helm, but with a certain malevolent glee.

It occurred to me today why I don’t feel any sadness at all for Joe’s dementia. That’s because dementia didn’t rob Biden of his personality and his very core identity, turning him into another person entirely. Instead, dementia has exposed Joe for what he’s always been: Stupid, mean, creepy, and corrupt.

Joe’s mean, corrupt, stupidity has, for most of the last 47 years, been hidden behind the bonhomous mask and faux-friendly Jack O’Lantern grin. He was the frat guy who always had a mean joke about everyone, but was nevertheless fun to be around. “Ah, Joe, he’s a bit of an ass but he’s a great guy.”

Well, no, Joe is not a great guy. Over the years, thanks to Joe’s foot-in-mouth disease, we’ve seen periodic glimpses of the real Joe:

He’s the man who, in 1987 lied about his intelligence and his academic record, and insulted voters by saying they were less intelligent than he was —  and let me tell you, that’s a serious insult. It’s like having someone tell you that you’re more stupid than a mushroom.

He’s the man who, along with that deeply corrupt murderer, Ted Kennedy, gave rise to the term “borking” after they savaged Robert Bork, a great legal scholar. And he’s also the one who engaged in a hi-tech lynching against Clarence Thomas.

He’s the man who’s been wrong about every foreign policy decision ever.

He’s the man whose anti-Black and anti-East Indian racism oozes out of him constantly.

He’s the man who’s generally been exceedingly nasty over the years, often to voters who dared asked him challenging questions.

He’s the man who constantly fondles little girls in public. It’s so creepy that, even if he’s not an active pedophile in the bedroom (and there’s no indication that he is), there’s something deeply, morally wrong with him.

And of course, as we’ve discovered, thanks in large part to Hunter’s laptop (which the Chinese have too), he’s unbelievably corrupt.

Now, thanks to Biden’s increasing dementia, everything that he’s always been but mostly managed to cover is on stark display. There are no longer intervals of a year or two or more in which he doesn’t pop up on the radar for exposing his stupidity, meanness, creepiness, and corruption. Instead, everything is present. In England, he was a bumbling, stupid, angry old fool. Whenever he’s on the stage, if there’s a little girl present, he can’t help himself — he focuses on her like a perverted laser. And the fact that his sleazy, corrupt son is selling his daubings for up to $500,000 to conveniently anonymous purchasers means that he’s still selling access, even if it means selling out Americans.

This is Joe. Dementia didn’t subtract, it revealed. Joe has become the living embodiment of that ugly portrait of himself that always lurked in the attic even as, in public, he attempted to hide the truth with hair plugs, facelifts, disturbing fake (or hyper-whitened)  teeth, and faux bonhomie.

The truth has caught up with Biden and he is exposed for all the world to see. And that’s why I don’t feel the slightest bit sorry about attacking this specific demented old man.