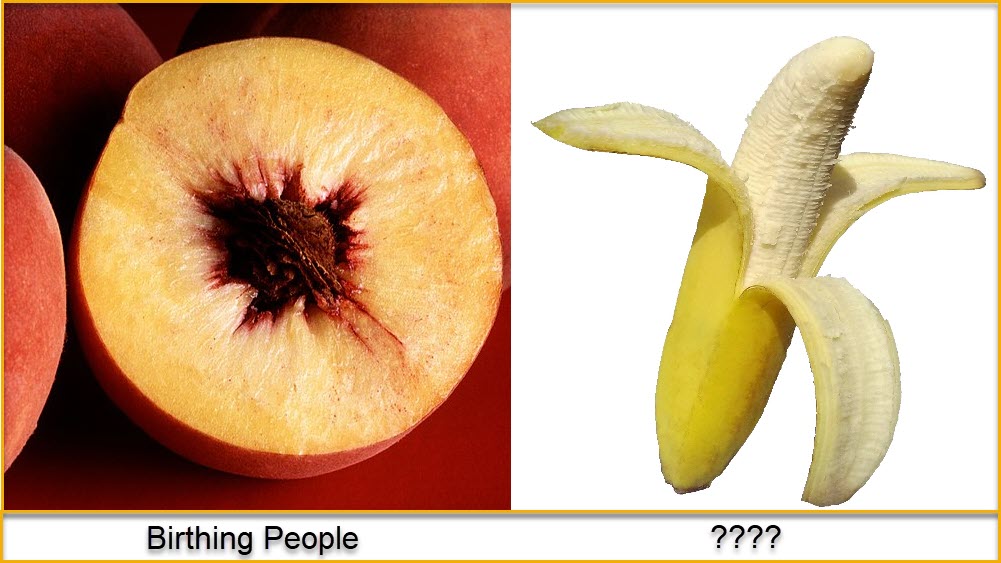 …Just wait until you see what the leftist “science” community has come up with as the new nomenclature for men.

Biden’s proposed budget (which Chuck Schumer hopes to cram through the Senate) is bad at so many levels. Economically, it’s a pure Cloward-Piven strategy to break America. Practically, it seeks to flood leftist causes with money, while draining Americans dry. But perhaps the very worst thing about it is that it calls women “birthing people,” a demeaning phrase that reduces half the population to a mere procreative vessel.

The premise behind the ludicrous phrase “birthing people” is that, while all women can theoretically give birth, not all people who give birth are women. Instead, some are men. Transgender men. To the party that worships the god known as “Science” as part of the faith of “Scientism” this apparently makes sense. To the rest of us, though, it’s utterly ludicrous.

Those of us who support the scientific process, rather than the God of Science, know that the only people capable of giving birth are those with ovaries and a uterus — and having ovaries and a uterus means that, by definition, that person is a woman. Women remain biologically female even if they have surgery to cut of their breasts and call themselves “men.”

Meanwhile, those with a penis and testicles are incapable of giving birth, even if they call themselves a woman. Instead, they provide the seed that fertilizes the eggs that women’s ovaries produce. It’s not complicated. That’s why the term “birthing person” is so deeply offensive. It erases the one thing that makes women absolutely and indubitably women: The ability to incubate a human life after having created that life with a…man. That’s science, not scientism.

Nevertheless, as part of the Church of Scientism, the left is now all about “birthing people.” I jokingly said to a friend that, if things continue this way, men will henceforth be known as “sperm delivery people.” I was wrong, so wrong!

I was wrong for a very specific reason, which is that I forgot that, in pure biological terms, only genetic males can create sperm. (Science!) Calling men “sperm delivery people” is an insult to “transgender men” (i.e., women) because they cannot and will never be able to deliver sperm.

Fortunately, IFLScience, a hugely popular “science” website is here to help. It’s important to note that, although the word “Science” appears in the site’s name, it’s really a frontline site for the Church of Scientism.

As part of the catechism for the Church of Scientism, IFLScience introduces the correct phrase for the people who are not “birthing persons.” They are “Penis Havers.” After all, thanks to the miracles of modern surgery, even women can be mutilated into having a weird simulacrum of a penis. Here’s what IFLScience has to say:

Roughly (slightly less than) half the population on Earth has a penis, something that the other half has no experience of. Fortunately, Redditors are out there ready to explain in explicit detail what it’s like to have a donger.

In an AskReddit thread, hordes of penis-havers dived in to give their response to the age-old question: What’s the most annoying thing about having a penis?

If IFLScience’s writers weren’t so desperately trying to avoid the word “men” they would have written the above differently:

Men make up roughly (slightly less than) half the population on Earth. Because they have penises, their experience is necessarily different from the other half of the Earth’s population; namely, women. Fortunately, Redditors are out there ready to explain in explicit detail what it’s like to have a donger.

In an AskReddit thread, hordes of men dived in to give their response to the age-old question: What’s the most annoying thing about having a penis?

Since ancient times, people knew that the Earth was round, something apparent because of the way we see the horizon, which curves out of sight. The claim that they thought otherwise is a complete myth. While their ability to observe things was not as great as ours, and they did not have the shoulders of as many giants (Copernicus, Galileo, Einstein, etc.) on which to stand, they were not idiots. They were fully as capable of observing the real world as we are.

It is we — or, rather, the leftists among us — who are idiots. Despite an observable natural world and the benefit of being at the apex of scientific understanding, they are pretending that human biology is imaginary. Only a credentialed, as opposed to educated or wise person, could be so truly and dangerously stupid. 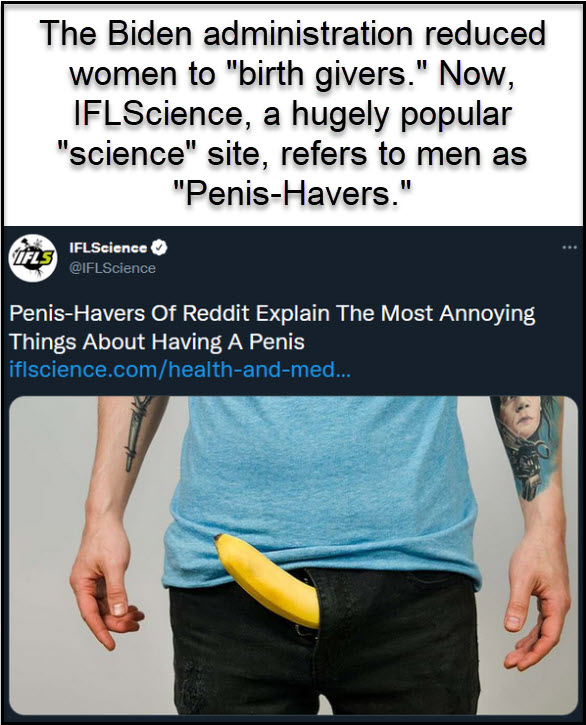