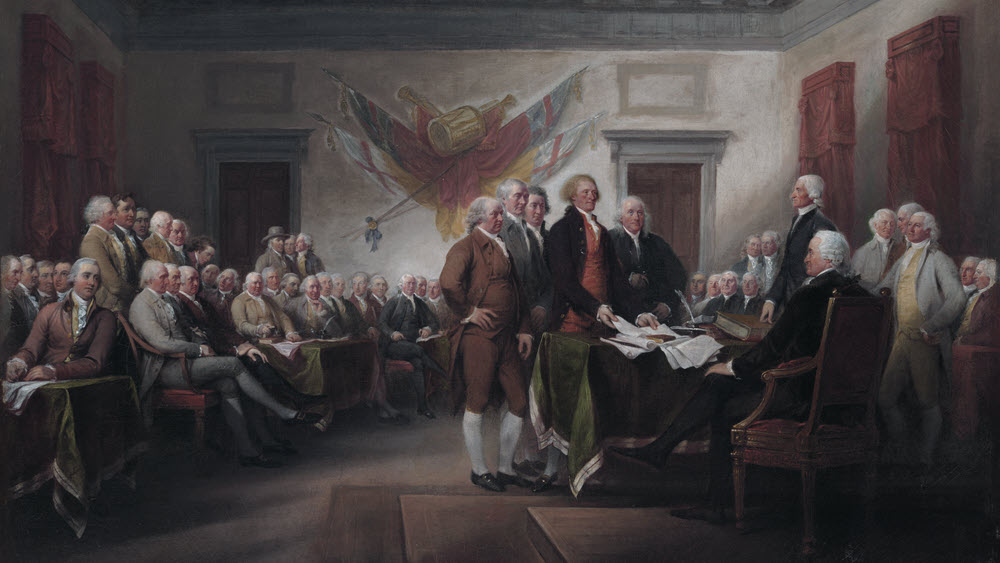 245 years ago, our Founders stated for the first time the notion that humans have God-given rights. Woe betides us if we forget this Truth.

A contributor to American Thinker reminds us of something very important — that the Founder’s great idea wasn’t “liberty.” Instead, our Founder’s great idea was that the government does not “grant” to us the practical consequences of liberty (free speech and assembly, worship free of government oversight, due process, the right to bear arms, etc.). Instead, they are inherent rights, coming from a Creator. The important idea in America isn’t liberty but God.

Lots of socialist governments like to talk about “liberty.” The French Revolution, for example, gave us the phrase “Liberté, égalité, fraternité.” However, the revolution merely switched one tyranny (the monarchy) for another (the revolutionary government). French citizens were free from the king but even today life in France is completely defined by what the government allows. Whether in China, the former Soviet Union, Cuba, or North Korea, citizens are assured that they are “free” from the tyranny of “before,” but their lives are utterly controlled.

And why shouldn’t socialism think that way? The first socialist revolution in France gave us the expression that “Men will never be free until the last king is strangled with the entrails of the last priest.” God is anathema to socialists because, in their world, all the rules — and so-called freedoms — come from whichever humans have the most power and all the guns.

In America, though, 245 years ago, our Founders said that freedom does not come from man. This means that other men, whether through government or other means, cannot take that freedom. be taken from man. Instead, the Creator, something bigger than and outside of all humankind “endowed” us with inherent freedoms: Life; liberty; the pursuit of happiness; freedom of speech (including through the press), assembly, and worship; the right to due process; the right to a life free from an intrusive government; the right to bear arms, and many more. Whoever or whatever tries to remove those rights is in the wrong.

You’ve noticed how awkwardly I phrased that, with the “who” and the “what.” But in today’s world, we need to think that way. To the extent our rights are inherent, if anyone or anything else removes those rights, that other person or thing is in the wrong for interfering with rights that our Creator — not man or government — made an integral part of our beings.

When the tech monopolies remove our speech rights, block our ability to assemble, or interfere with our pursuit of happiness through honest work and communication, we don’t need to point to a specific law to say they’re wrong. The Constitution and the Bill of Rights, by articulating things inherent in every person, tell us that these entities are infringing on our liberties. To the extent the tech companies have aligned completely with the current Democrat monopoly over the instruments of power, they are as surely violating our natural rights, as enshrined in the Constitution, as the government itself.

I’m not recommending a course of action. I’m just reminding you that you are an inherently free person and that anyone or anything who infringes upon or entirely shuts down those freedoms is running afoul of God and the Constitution. Keep that thought in the forefront of your mind and you will have an accurate compass to guide you through the Techno-Democrat-Reset world in which we live.

IMAGE: John Trumbull’s Signing of the Declaration of Independence (cropped).