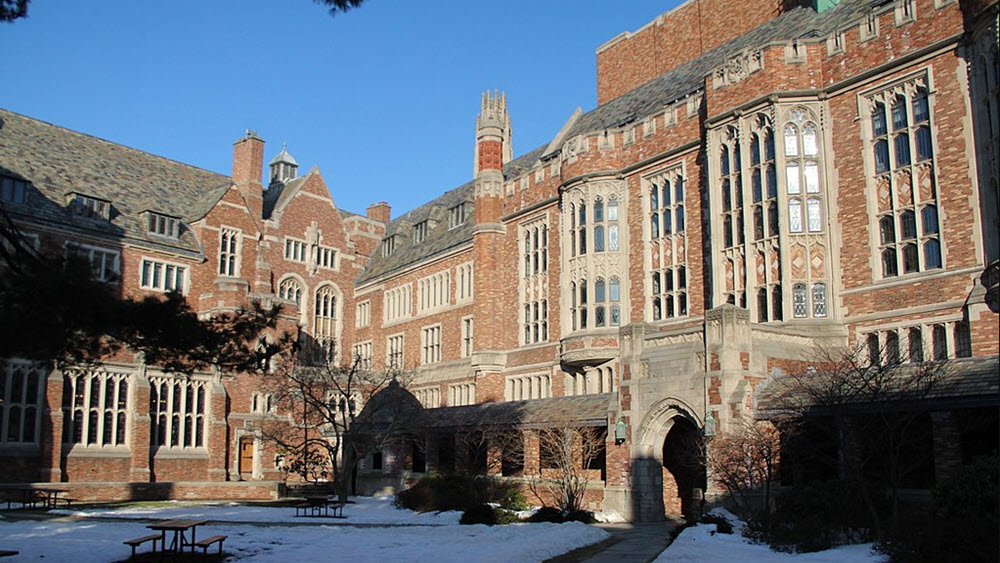 Two Yale Law administrators coercing a student for a party invite that offended 8-9 students is a rare window into race-based leftism.

A Yale law student who is part Cherokee and belongs to the Federalist Society invited people to a back-to-school party, calling his place a “trap house.” The school’s race hustlers went crazy and reported him for engaging in a racial attack. The student was dragged before the associate dean, Ellen Cosgrove, and the “diversity director,” Yaseen Eldik.

Cosgrove is painfully White and completely on board with Critical Race Theory, yet she’s failed to leave her job so a deserving “BIPOC” (Black, Indigenous, People of Color) can have access to something she clearly holds due solely to “White privilege.” Did I mention — why, yes, I think I did — that the offending student is a member of the “IPOC” part of “BIPOC”? What a hypocrite she is.

Eldick is neither Black nor Indigenous, although he might be characterized as a very pale Person of Color. He earns his place on the hierarchy of leftist victimhood because he’s Muslim. Also, although it’s not entirely clear, he may also tick off a second victimhood box by being gay. (It’s possible that he may only be an ally.) It’s also unclear how he squares Islam’s punishment for gays (death) with the fact that he either is gay or is an ally of the LGBTQ movement. Luckily for Eldick, leftism never requires intellectual consistency.

The student has not apologized. Instead, he recorded the meeting with these two race hustlers. I tried listening to the recording but (a) found it hard to understand, (b) hated to waste time listening to it, and (c) much preferred the Free Beacon’s transcript. Having looked at the partial transcript, it struck me that it was ripe for fishing. My comments are in red:

-1:00: Eldik explains why the term “trap house” is “triggering” and “racialized.” I didn’t listen to Eldik. I looked up the word “trap house” and learned that it’s a bastardization of “crack house.” So no matter what Eldik is saying, he’s really saying that Blacks are associated with crack houses. How incredibly racist of him.

-5:15: The student is told that “as a man of color, there probably isn’t as much of a scrutiny of you as there might be of a white person in the same position.” Eldick just admitted that Yale engages in illegal race discrimination for thought crimes.

-5:32: Eldik says that the student’s affiliation with the Federalist Society was “very triggering” for students who “already feel” that the conservative group is “oppressive to certain communities.” Eldick just admitted that minorities are incapable of handling ideas they dislike. They’re going to have a hard time functioning as actual lawyers, given that the nature of law is contentious, with people having to argue opposing facts and theories rather than just screaming, “Shut up!”

-7:15: Eldik says his office has received complaints that the student’s email was a “form of discrimination” and “psychically harmful.” If Eldick were a man of intellectual integrity and moral decency, he would explain to those triggered students that they need to be a little “psychically” tougher. Indeed, they could create emotional calluses by spending some time reading conservative websites. (I recommend starting with American Thinker.)

-10:00: Eldik starts to pressure the student to apologize. This is pure Maoist struggle session thinking.

-12:10: Cosgrove warns the student that “these things amplify over time,” so apologizing quickly is important “for your sake.” Cosgrove is doing the law school equivalent of a mafia boss going into a neighborhood drug store with his goons at his side, looking around, and then saying, “Nice little place ya’ got here. Be a real shame if something happened to it.” It’s a protection racket or, put another way, extortion.

-14:05: Eldik says his office has received “eight or nine student complaints about this” and tells the student that the best way to make this “go away” would be an apology. Yale has over 600 students. There is no uproar here. Instead, the administration is catering to the irrational demands of a hypersensitive microminority, that clocks in at less than 1.5% of the total student body. Rather than harassing the Cherokee kid, Yale should be telling those 8-9 Black Student Association kids to pound sand.

-15:10: Eldik says he worries about the email affecting the student’s reputation, “not just here but when you leave. You know the legal community is a small one.” Again, this is extortion, coercion, a protection racket, blackmail, or whatever else you want to call it. If I were the student, I’d sue.

-16:20: Eldik volunteers to help draft the email. If Eldik needs to write it, the student isn’t really apologizing, is he? This is like the signed confession of heresy that people tortured on the rack used to give. Their inquisitioners wrote out the apology and the tortured people, assuming they weren’t so broken that they could no longer hold a quill signed their names or made a nice “X.”

-18:10: Cosgrove warns that escalation is a possibility if the student doesn’t apologize. Escalation?! This part Cherokee man is being bullied because 8-9 race hustlers identify themselves with crack houses and therefore took offense.

-1:13: Eldik says, “This is all because we care about you,” and tells the student, “I don’t have to do my job like this.” Eldik certainly doesn’t have to do his job like this. Indeed, if he were a decent person, he wouldn’t be a member of the thought and censorship police in the first place. And no, he doesn’t care jack-squat about the student, no matter what he says. Eldik and Cosgrove are the modern incarnation of the “banality of evil” that characterized Hitler’s petty bureaucrats. These are small-minded people who, given a modicum of power, abuse it.

-1:35: Eldik says, “You’re a law student, and there’s a bar [exam] you have to take, so we think it’s really important to give you a 360 view.” More of that extortion, duress, blackmail, coercion…. This student really needs to sue.

I have no words for how disgraceful the Yale Law administration is. I once had respect for Yale Law School because, 30 years ago, those Yale law grads with whom I worked were sound legal thinkers. (By 30 years ago, Harvard was already a lost cause, and the graduates were horrible people and lawyers. Viewed in that light, it was a perfect fit for Liz Warren, even if she did lie to get the job.) Now, if I saw “Yale” on someone’s resume, I’d go looking for another lawyer.