The New Jersey trucker who defeated the Senate president is now getting smeared as “racist, Islamophobic, transphobic, and anti-Semitic.”

It was to be expected that Steve Sweeney, the New Jersey State Senate president who lost to a trucker would miraculously find 12,000 “uncounted” ballots after the election that he’s certain will favor him. This is the regularly occurring miracle of the Democrat and has been going on for as long as I can remember. Remarkably, these late-found ballots never work in Republicans’ favor. Go figure….

Something else happened after the election, which we should have expected too: We’re now learning that Edward Durr, the Republican who won the election and whom nobody bothered to investigate before the election, is a hater. Yes, he is, at least according to NJ.com (“Newly elected GOP state senator’s social media accounts contain xenophobic, anti-Muslim posts”).

That story is behind a paywall, but the Daily Mail repeats it in an article claiming Durr is responsible for “Racist, Islamophobic, transphobic and anti-Semitic posts.” You know that, if the Daily Mail is reporting it, this is the smear that Democrats have decided to use against him.

Since I know how antisemitism ended the last time it got out of hand, there’s no better way to turn me against someone than to point out that the person is responsible for anti-Semitic statements. Incidentally, I do not count ignorant statements or statements of dislike as automatically amounting to deadly antisemitism. Forty years ago in England, a young man who’d never met a Jew asked me, “Aren’t all Jews rich?” He came from a place of ignorance and was genuinely surprised when I explained that was a stereotype. Nor do I demand that people love Jews. My standard is simple: You may not stir up genocidal racist hatred against Jews based upon lies.

So, with Durr smeared as an anti-Semite, I naturally had to check out the article. These are the social media posts that the Daily Mail introduced as “evidence” of all the bad “-ism” and “-phobe” boxes that Durr is alleged to check, followed by my comment about each statement he made: 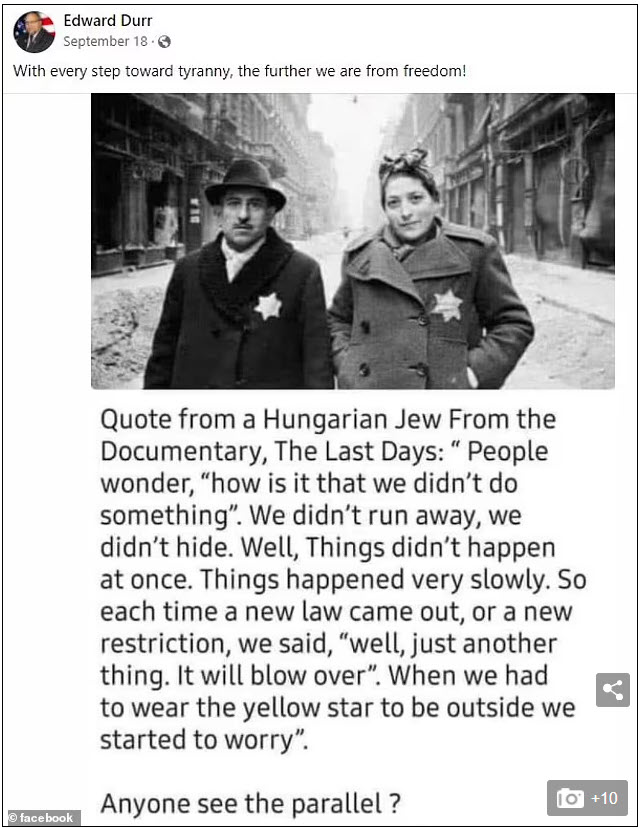 No matter what the left says, it is not anti-Semitic to point out that the Biden administration and leftists across the country are “other-izing” people who do not get vaccinations. They are being denied work and denied access to the ordinary institutions of society: restaurants, gyms, theaters, etc. People must have cards that prove they are entitled to participate in society. Noam Chomskey flat-out said they need to be rendered homeless and denied food, which is, of course, exactly what Hitler did to the Jews.

And please remember that the virus is minimally dangerous to people under 70 who are healthy. We older folks are a little more at risk but, by the time you get to the under 40 crowd, it’s just a flu. Moreover, the numbers may even be better than that because it turns out that Italy’s problem wasn’t the “super-deadly” COVID. It was a socialized medical system unable to handle a bad flu season:

“Of the … 130,468 deaths registered as official COVID deaths since the start of the pandemic, only 3,783 are directly attributable to the virus alone,” reports Summit News.

As the Daily Sceptic’s Toby Young wrote on Thursday, “All the other Italians who lost their lives had from between one and five pre-existing diseases. Of those aged over 67 who died, 7% had more than three co-morbidities, and 18% at least two.”

So no, Durr’s post is not an anti-Semitic Holocaust analogy. It is a warning that societies go downhill into madness very quickly when they start saying that certain people are no longer entitled to participate in society, right down to losing access to food and housing. 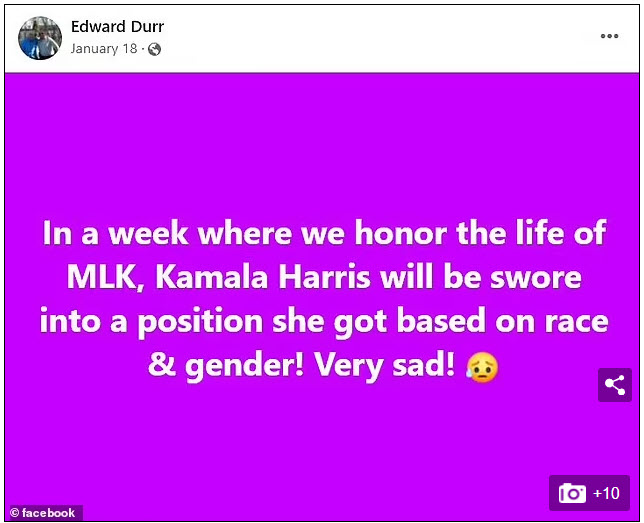 I think it’s sad, too, and so should every minority in America. Kamala represents White leftists saying that the stupid, round-heeled, irritating, and corrupt Kamala Harris is the best that minorities can do when it comes to elevating someone to a high position solely based on race and gender. She didn’t get there on merit. She is the reductio ad absurdum of affirmative action and it is a shame.

People like Kamala depress quality and merit by telling minorities (and some women) that, if you rely solely on personal qualities over which you have no control (race and sex) that’s good enough…so why try harder? 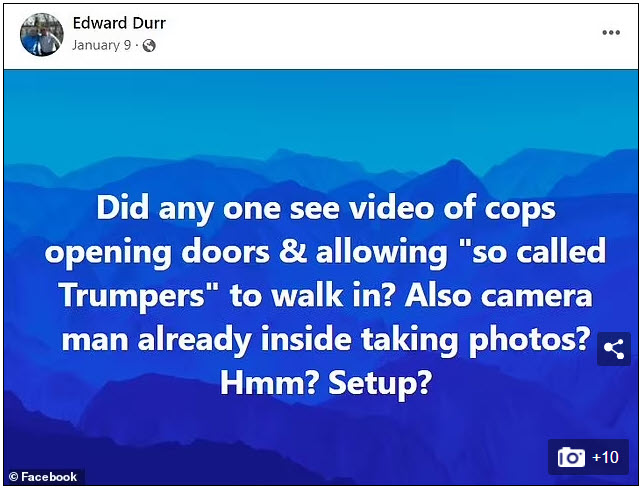 O!M!G! Durr doesn’t believe the official narrative that January 6 was an insurrection. Well, I don’t either — and neither do a lot of people who point out (as Durr did) that the police opened doors to let the rioters in.

Others point out that the FBI has never arrested or charged those who were videotaped (and easily identified) going through the crowd urging an attack on the Capitol, that people wandered through peacefully goggling at the institution they pay for and to which they assign employees in the form of politicians, that those people arrested, none of whom have had a right to a speedy trial and few of whom who have had decent representation, are being subject to gulag-like abuse in the D.C. jails. Every day reveals new horrors about their conditions. A judge was shocked by the treatment accorded to Chris Worrell — but the rest are still trapped there. Meanwhile, none of us forget that the 2020 BLM rioters and looters, including those who intended to set fire to the White House, walked free.

Considering what happened on January 6 and afterward, Burr’s statement is both mild and accurate.

It’s not transphobic to say that Bradley Manning should still be rotting in jail. It’s also not “transphobic” to point out gently that people who claim to be “transgender” are mentally ill. I’ve written here about the fact that there is no scientific evidence whatsoever to support the claim that transgenderism is real.

I’ll also restate my proposal that, when people claim to be “transgender,” rather than slicing and dicing their bodies with horrible, mutilating (and profitable) surgery, and giving them hormones that are the opposite of their biological sex, something that causes heart disease, cancer, and other fatal illnesses (but profit for the medical establishment), the very first line of treatment should be to give them hormones consistent with their biological sex. If testosterone is going to make a mentally-ill woman feel manly, I’m going to assume that it will help a mentally-ill man feel manly too.

Racist? Not a bit. First, Antifa is mostly White and its people are violent, deadly, destructive anti-American anarchists. Second, BLM activists are violent, deadly, destructive, deeply racist, and all-around awful people, who also happen to be open Marxists. As evidence, I point you to every single riot in 2020, not to mention the words of these activists. I won’t link because this is one search that’s easy for you to do.

The Daily Mail doesn’t include images of any purported “anti-Muslim” social media messages but I’m sure they point out that Islamic terrorists are behind most terrorist attacks around the world, no matter how much the Biden administration tries to say that America’s White citizens (a group in which Biden himself belongs) are the real threat.

Shame on the Daily Mail for mindlessly repeating NJ.com’s slanderous take on Durr’s entirely accurate and really quite moderate expressions of operative facts in the real world that Democrats have foisted upon us.