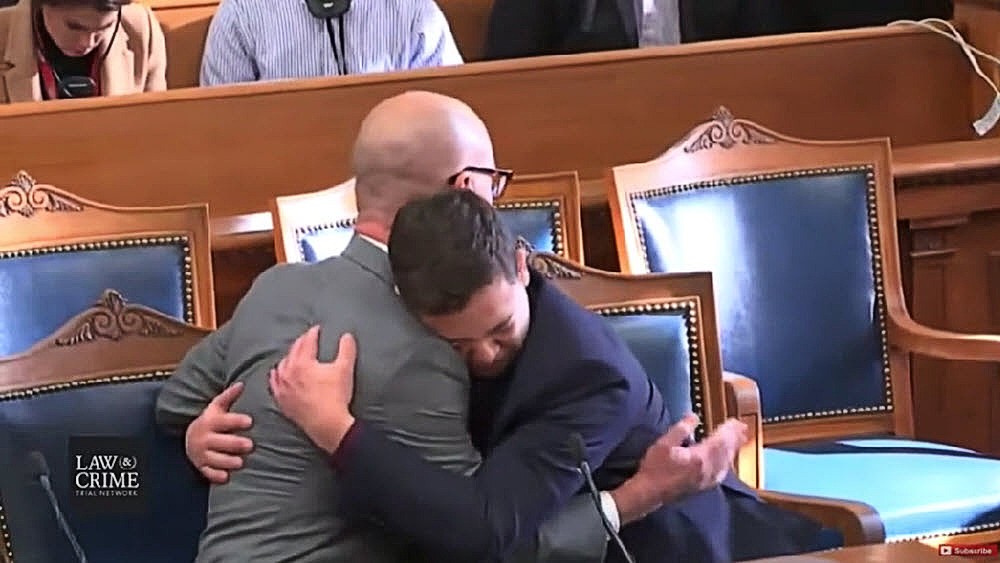 The next mission for Joshua’s Army is to correct the lies that the left is spouting about Kyle Rittenhouse and his trial.

The left is suffering from a mass delusion, and it’s our job as members of Joshua’s Army — the loud, polite voices of righteous truth — to try to bring them back to reality. People can have transitory delusions, some of which are more amenable to reason than others.

When my mom was 90, she was hospitalized for a procedure and started sundowning every night. For those who haven’t dealt with an elderly person, “sundowning” occurs when night falls and the older person starts hallucinating. Being in an unfamiliar environment triggers it, even in people who are not generally suffering from dementia.

What fascinated me about my mom’s hallucinations was how real they were to her. She told me that “the Germans” had entered her hospital room through the window, surrounded her bed, and been conversing with her. I took her to the window and showed her that (a) it was a non-opening window and (b) she was on the third floor. Mom was unable to accept this irrefutable evidence that her nighttime escapades with “the Germans” could not have happened. The experience was so real to her that it transcended all countervailing facts.

With that anecdote in mind — about a failing mind struggling with transitory dementia — I’d like you to look at this meme that’s popping up on leftist social media:

The meme repeats a tweet from Santiago Mayer. Who is Mayer? He’s an Act Blue operative who identifies himself on Twitter, not by the American flag, but by the Mexican flag.

So, Mayer made this statement and it’s being wildly shared all over social media. What’s important about it is that every fact within it is wrong.

Allow me to break it down:

1. The implication that Kyle committed a crime by crossing state lines. In America, we citizens can freely cross state lines. There is no penalty in America for doing so. It’s part of our constitutional system. When I left California for the Southeast, I did not have to report myself to the local police station. And of course, the whole “crossed state lines” mantra is ludicrous coming from the party that disavows national borders.

2. The “illegally” acquired gun. The reason the judge dropped the gun charge against Rittenhouse is that the rifle was neither illegally-acquired nor was Rittenhouse underage. The rules are different for long guns, and the measuring tape established that, when Rittenhouse entered Wisconsin (a mere 20 minutes from his home), and his friend loaned him the rifle, neither broke the law.

3. The “assault rife.” There is no such thing as an “assault rifle.” The “AR” in the name comes from the 15th model that Armalite Rifle manufactured in the 1950s. It’s now the industry standard.

I’ve also seen people refer to the weapon Rittenhouse was carrying as an “automatic weapon.” That’s not true either.

The AR-15 is a semi-automatic weapon, meaning that you have to pull the trigger for every shot. If it were automatic, pulling the trigger would release an unending stream of bullets until either the magazine emptied itself or the user took his finger off the trigger. Indeed, Rittenhouse showed exemplary trigger control at all times.

The AR-15 is beloved because (a) it has minimal kick and (b) it can be blinged out like crazy. The bling seems to be what scares lefties. This cartoon, about a chihuahua’s self-image, shows how lefties view an AR-15, compared to a less fancy rifle: 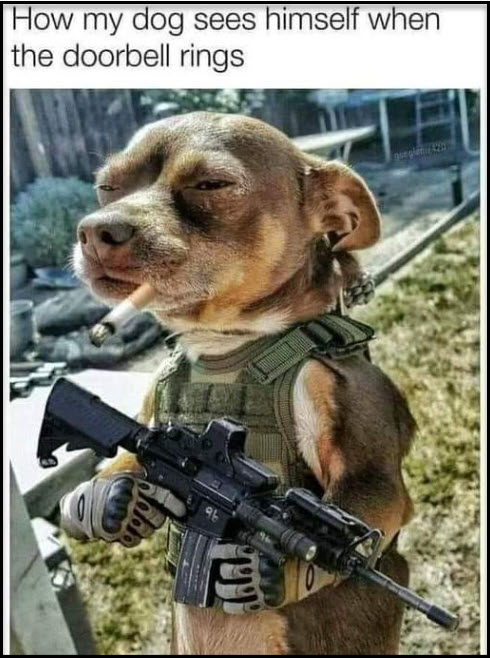 4. “Attended a MAGA rally.” Nothing that happened in Kenosha was comparable to a MAGA rally. No MAGA rally has ever involved burning a whole city down. People are cheerful, behave well, and clean up after themselves.

I know that leftists will point to January 6 as proof that what I just said is untrue but that is not a working analogy. First, of the more than 100,000 people who appeared in D.C. that day, upwards of 90% were far from the Capitol and were behaving in typical MAGA fashion: Cheerful and lawful.

Second, there’s good reason to believe that the FBI, as is its wont, had provocateurs, agitators, and agents in the crowd trying to entrap people.

Third, those arrested on January 6 were not armed.

Fourth, even at the height of the protest, nothing was burned or broken.

Fifth, the only violent death occurred when a Capitol police officer shot an unarmed woman in cold blood.

5. “Picked a fight.” Kyle did not “pick a fight.” The undisputed evidence at the trial, from the prosecution’s own witnesses and video footage, showed that Rittenhouse offered first aid, shied away from any conflict, ran as fast as he could away from Rosenbaum’s intended assault, and was also trying desperately to run away from Huber’s and Grosskreutz’s assaults.

When it comes to picking a fight, that same testimony showed that those whom he shot attacked Kyle first. We also know, even though the jurors didn’t, that the three whom Rittenhouse shot were people with long records of violence and perversion. While their conduct was not on trial, their records were consistent with their behavior their night. 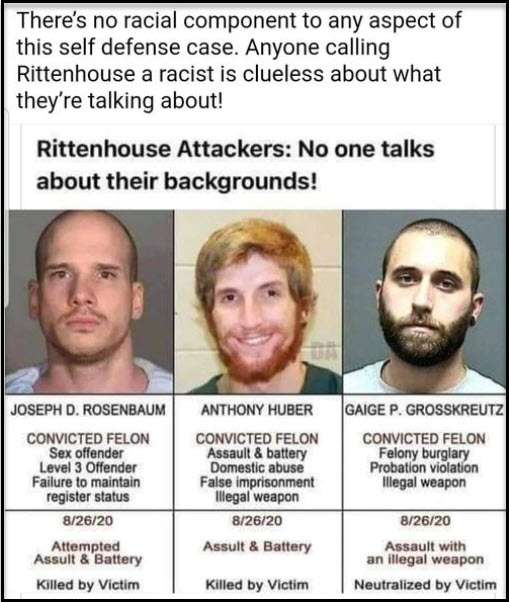 6. Racism! And of course, the implication that this is about race is wrong, too. Not only is Kyle White, so are/were the people he shot. (See image, above.)

So, as I said, every “fact” in that meme is wrong. And here’s something else to chew on: If a Black teen had been in exactly the same situation as Rittenhouse — a young man who, seeing rioters destroy his father’s town, drove 20 minutes to try to protect businesses, armed himself with a legal rifle, and fired back when three felons attacked him with intent to kill — MAGA people would have been as strongly supportive of that teen as they are of Rittenhouse.

For conservatives, the principle at stake isn’t race; it’s the right to self-defense that is an integral part of being a citizen in a free society.

Another principle is that if the adults don’t act, children and teens who have been raised right and believe in a law-abiding system, will bravely step up and try to do what the adults refuse to do.

Oh, and another principle is that leftists are not only flogging the Rittenhouse case to stir up racial hostilities, they’re also using it to try once again to end the Second Amendment, not through a constitutional process, but by stirring up enough citizen outrage to ignore the Constitution.

Before I end, let me talk about the media’s role in all this. And to do so, I’ve got another “mom” anecdote. For decades, my mother and her sister were close friends, although with the typical sibling rivalry that can exist between sisters. In the 1970s, they met Joan, who became friends with both of them. For reasons that elude me, the sisters saw a cachet in having Joan as a friend, so there was instantly some rivalry in place.

All this attention went to Joan’s head and, when combined with a manipulative personality, you can guess what happened next: Joan started to sow dissent between the sisters. For thirty years, she’d tell my mom that my aunt had said or done something behind my mom’s back that was hurtful and harmful to my mom. Then, she’d tell a similar story to my aunt. The result was that the sisters began to hate each other.

My aunt eventually figured out what was going on but my mom, who had a paranoid streak a mile wide, refused to see the truth. Just as she could simultaneously acknowledge that her hospital window was sealed and three stories high, while insisting that the Germans entered that way, my mom agreed that Joan was a manipulative liar but justified her continued hostility to my aunt on the basis of Joan’s lies.

The media, like Joan, feel their power. Their goal, as I’ve written before, is to replicate Charles Manson’s Helter-Skelter tactic: Sow dissent between America’s different races to create a race war. Once that war has leveled America, in the case of the media and their water carriers in Congress (the Squad and other morons), they imagine themselves as the leaders of a brave new socialist world. Racism will be over because everyone, Black, White, Yellow, Brown, Purple, and Green, will be firmly under the jackbooted feet of our new totalitarian leaders.

It is up to us to confront the lies, and to help those who have not become so demented that they cannot see the truth: And the truth is that we are being lied to and used so that ordinary Americans become the hate-filled engines of their own destruction.

I have a suggestion for confronting them. A wise man I knew used to say of interpersonal squabbles, “Don’t get furious; get curious.” E.g., if your spouse says something you see as an insult, before you get angry, ask an open-ended question to ensure that your spouse really meant to insult you. It’s a good policy, it prevents fights, and it makes you look like the mature peacemaker.

In this post, because it’s a monologue I called out the lies for what they are. However, if you’re conversing with leftists, in person or via social media, all that you must do is politely ask them to direct you to the facts supporting their conclusions.

Yesterday, although I normally never engage on Facebook, I couldn’t resist playing this game. Someone commented on a friend’s post that Judge Schroeder wore a black robe to hide his white robe. I posted a polite (albeit slightly dishonest) reply. “I haven’t been following this much (that was the dishonesty). I assume you’re saying this about the judge because Kyle Rittenhouse is a White supremacist, so the judge, by making rulings in his favor, must also be a White supremacist. Can you give me the facts about Rittenhouse’s White supremacy so I can understand what happened?”

Don’t get furious; get curious. Politely push them to share with you the facts supporting their claims. And if they return with provably incorrect “facts,” politely respond with irrefutable truth. Lots of them are going to be sundowners who cannot recognize the truth but others will be like Bari Weiss and realize that they’ve been the victims of a giant con.

We are Joshua’s Army, we come armed with the truth, and the truth can set America free from the leftists’ kingdom of lies.