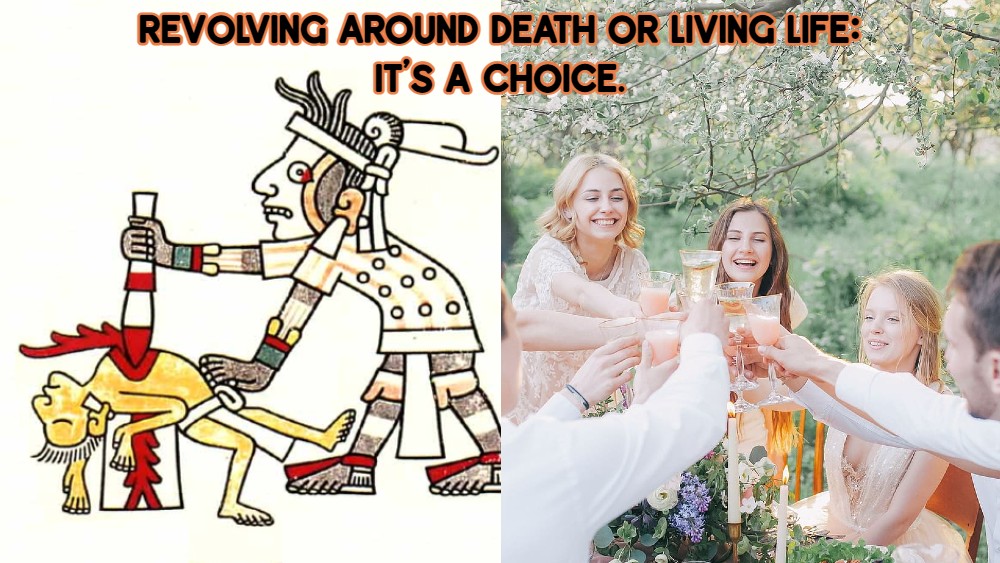 Americans’ very different reactions to COVID make me wonder how much our vanishing Judeo-Christian heritage factors into those reactions.

America embarked on two diametrically opposite paths once the first COVID panic ended. Leftists embraced an approach intended to do anything and everything they could to avoid the possibility of dying from COVID. Conservatives, however, decided at a certain point that COVID was just another of the risks that are part of life and decided to return to normal. It occurred to me that the difference may be that the Judeo-Christian faith is about life, while pagan cults (and leftism is such a cult) are always about death.

As a reminder, on average, COVID’s mortality rate hovers around 1%, which is scarcely armageddon. There’s also reason to believe that early treatment with simple, affordable medicines such as Ivermectin and Hydroxychloroquine could cut that mortality rate even more.

Rightly or wrongly, I also believe that the mortality numbers have been and still are overstated for political purposes. My reasoning is that they were first overstated to get Trump out of the White House. Now they’re overstated to force everyone to take vaccinations whether they want them or not.

A lot of people believe that the vaccines are intended either to depopulate the world or essentially to insert “chips” into us putting us under the involuntary control of those advancing the Great Reset. I’d prefer not to think in such apocalyptic terms. For me, it’s enough to believe that the point of the vaccines is control: Separating the meek from the fighters; punishing the fighters; and, once the last fighter goes down, tracking everyone through vaccine passports. It’s the fastest, easiest way to achieve that Great Reset.

And of course, the best way to achieve the goal of total control is through fear of death — which gets me to my theory about the pagan left and death versus Judeo-Christian conservatives and life.

The Torah (aka the Old Testament or Jewish Bible) came into being when paganism was the only game in town. The major pagan cults in the Middle East, as the Bible is at pains to show us, revolved around death.

For 3,000 years, everything the Egyptians did was with an eye to death. The Baal worshippers did human sacrifice. The best way to avoid death was to kill someone to pacify the capricious gods.

Even outside of the Middle East and in the thousands of years after the Torah came into being, all primitive cultic practices around the world involved death: Druids, Aztecs, Germanic tribes, Native Americans — all sought to stave off death by killing sacrificial victims, both willing and unwilling.

But the Torah was different. It said there was one abstract God who was not placated or bribed with human death (see, e.g., The Binding of Isaac). That theme was picked up in the Christian Bible (aka the New Testament), for the whole point of the crucifixion was to achieve eternal life for others. Not death.

The King James Bible online has some quotations about choosing life from the Judeo-Christian biblical tradition:

Deuteronomy 30:19 – I call heaven and earth to record this day against you, that I have set before you life and death, blessing and cursing: therefore choose life, that both thou and thy seed may live:

Romans 6:23 – For the wages of sin is death; but the gift of God is eternal life through Jesus Christ our Lord.

John 3:16 – For God so loved the world, that he gave his only begotten Son, that whosoever believeth in him should not perish, but have everlasting life.

And of course, unlike the Egyptians, unless they believe in reincarnation, today’s pagans do not believe in an afterlife. For them, it’s one and done, with death meaning that the person is completely obliterated. I’m with Dennis Prager on that one: If you believe in God, you must also believe that a just God, while giving us free will, would never be so unjust as to deny us a reward for living a good life and consequences for those who quite deliberately do not. Because that reward seldom occurs in this life, there must be something that comes after. The Jewish Bible obliquely suggests there is an afterlife with God; the Christian Bible states it explicitly.

So here we are, in America in 2021, poised on the verge of 2022, and we have people who are pagans who are obsessively focused on death. And like true pagans, they believe they can stave it off with potions (i.e., vaccines), rituals (i.e., masks and lockdowns), and sacrifice to Mother Gaia (i.e., the continued madness of climate change, which will toss us all back into the dark ages). And let’s not even start with abortion. That’s in the blue states and cities.

But in the red states and cities, we have people who have chosen life. They have decided that, just as there are risks associated with driving, flying, cooking, swimming, crossing streets, eating peanut butter, hiking in the woods, and a whole host of other things, one of the risks of life is COVID.

We who cherish life will still be careful. We’ll wear seatbelts, look both ways before crossing the streets, avoid dancing on cliff edges, and stay away from biker’s bars. Additionally, depending on our personal risk assessment, we’ll take vaccines and boosters or we won’t take them. And we’ll boost our immune systems with vitamins and happiness or we won’t. But the one thing we won’t do is to turn our bodies into pin cushions at the government’s command, erase our faces, lock ourselves in our homes, view everyone as the enemy, and live perpetually in the shadow of death.

We can live or we can survive. I choose to live.

(I know some will quarrel with me by pointing out that they are not believers in the Judeo-Christian Bible and they choose life. I say to them Bravo! I think it’s wonderful that you can do that. It also doesn’t change my argument.)