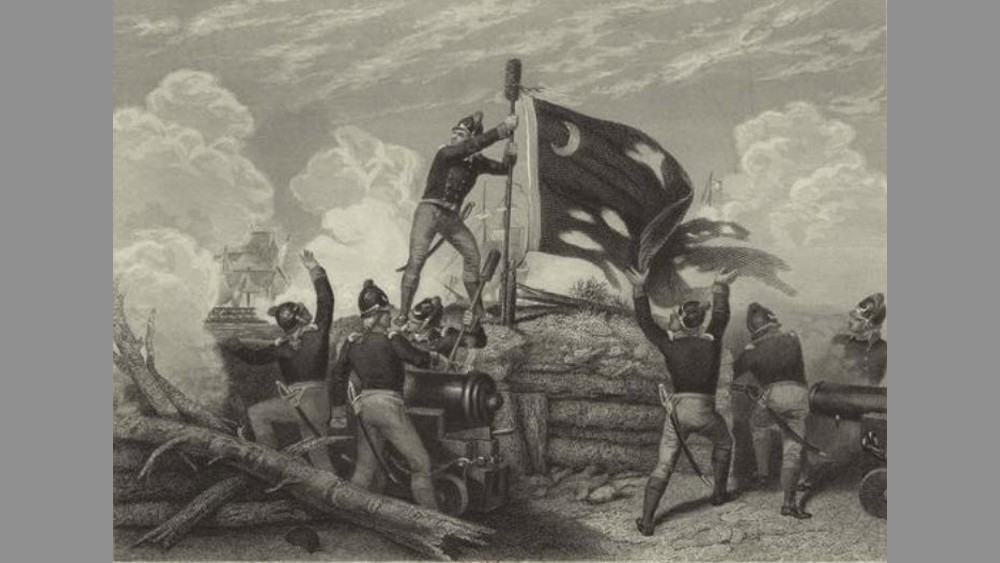 Counterintuitively, if you know a little bit about the American Revolution in South Carolina, you’ll feel optimistic about how bad things are today.

America currently seems to be in dire shape and getting worse daily. This fact cheers me up, and that’s not because I hate America. It’s because I believe that we’ve reached the point at which normal, politically disinterested Americans, instead of sitting out the raging political, cultural, and economic war in their country (something they could get away with for many decades), are being forced to take sides — and I don’t think they’ll side with the left.

I’ve long felt that the left has badly overreached, exposing its ugly underbelly to the American people. That this is a good thing solidified into a coherent idea for me today when I was at a historic reenactment at Hampton Plantation outside of Charleston. (You can read a bit about the plantation at the end of this post.)

After the reenactment, we went and spoke to some of the reenactors. One of them said something interesting about the reason South Carolina proved pivotal in winning the American Revolution — once in that colony, the British overreached themselves, not militarily but what one might call persuasively.

In 1776, the British attempted to take Charleston, the richest city in the colonies, but without success.  After that, they focused on the northern colonies. During this time, when the battles were fought elsewhere, South Carolina’s loyalties were split in roughly three ways — Patriots, Loyalists, and the “I don’t care; just leave me alone” people.

In 1779, after the British and the Patriots had reached a stalemate in the north, the British again turned their attention to the south, where they expected more loyalist support. And that’s when the war turned in America’s favor. (Most people don’t realize how pivotal South Carolina was to the Patriots’ success.)

The British entered the region with a huge force, finally managed to conquer the city of Charleston…and then promptly, through hubris, made a series of costly miscalculations in the regions outside of Charleston:

[Sir Henry] moved to pacify the rest of South Carolina, following his success at Charleston. His proclamations backfired and served to ignite patriot resistance. On June 3, he issued a proclamation that required Americans to take a declaration of loyalty and be willing to take up arms in support of Britain. This proclamation contradicted earlier guarantees of pardons and paroles for prisoners of war. Partisan militia bands under leaders like Thomas Sumter and Francis Marion proliferated in response to this proclamation, leaving the Carolinas a hornet’s nest as Clinton left to return to New York. He left Lord Cornwallis in command of British forces in the south.

Or as Conlan Kastanias wrote in the abstract for his thesis,

In 1778, the American Revolution in the north became stalemated. The British seemed unable to catch George Washington’s Continental Army, which in turn, lacked the strength to retake British strongholds. With the French and Spanish entering the war and threatening Great Britain on a global scale, the British Commander Sir Henry Clinton and the American Secretary Lord George Germain decided to adjust the British strategy and turn efforts toward the south. Initially, the British Southern campaign appeared unstoppable. On May 12, 1780, Charleston and the largest Continental army in the South capitulated. British military success climaxed when Lord Cornwallis routed the last Continental Army in the south at Camden in August. Despite these British victories, resistance intensified in the South Carolina backcountry. This Patriot insurgency critically undermined the British war effort, and contributed to their ultimate defeat.

To simplify: What turned the tide of war in the Patriots’ favor was that, with the war on South Carolina soil and the British making unreasonable demands on South Carolinians, the “I don’t care” people suddenly realized that they did care. While the British had hoped to push neutral people into the loyalist camp, their extremist actions had the opposite effect, causing people to abandon their neutrality (or lukewarm loyalty to Britain) and, instead, to become ardent patriots. It was the ordinary people’s change of heart that destroyed the British Army, leading to Cornwallis’s surrender.

I think we’re at that same point in America in 2022. For a long time, politically aware people have been split roughly 50-50, with an increasingly hard left (politically, socially, and economically) on one side and conservative constitutionalists on the other side. However, for decades now, there has also been a huge cohort of Americans who don’t care. They just want to be left alone. They don’t pay attention to issues, they don’t get politically involved, and they don’t vote. Many of them hew slightly conservative but, for that very reason, just want to keep their heads down and get on with their lives.

Meanwhile, for the last 16 months, leftists have seen themselves in the catbird seat. They own Congress, the White House, the administrative state, the news media, social media, search engines, and Hollywood. They no longer feel the need either to hide their teeth or to be persuasive. Instead, they’re letting it all hang out: Economic chaos, rising crime, an open border, totalitarian health edicts, raging energy costs, censorship, empty shelves, billions for Ukraine and none for America, ugly racial obsessions and, most of all, a full-court press against America’s children in the name of the LGBTQ++ movement.

Americans are noticing. For example, thanks to Taylor Lorenz at the Washington Post, who tried to dox Libs of Tik Tok into oblivion, Libs of Tik Tok has now doubled her reach, giving growing numbers of Americans a front-row seat on the gender madness in America’s classrooms and other American institutions:

A Pennsylvania teacher hosted a drag show event for students as part of the GSA club. Parents were reportedly not notified. The district has confirmed this morning that the teacher is on leave. pic.twitter.com/NSjkJELl6e

This is a school librarian. pic.twitter.com/dgThdP8i2V

Parents don’t like this. They know that people on the LGBTQ+++ fringes of life have greater incidents of depression, suicide, substance abuse, and social abuse. They’re also hearing from sources leftists don’t control that puberty blockers are not harmless. Instead, they can cause permanent harm to young bodies. And once the transgender groomers get their claws into children, the kids get harmful hormones and other chemicals, along with mutilating surgery, none of which can ever be fully undone.

As I’ve repeatedly pointed out, there is no science to back up the claim that transgenderism exists. All that the leftist community belches out is faux science that presumes that transgenderism is something more than a mental illness or, even giving it the most generous interpretation, a hormonal imbalance.

For the leftists to push these things on America — to double down on pushing these things — is the equivalent of the British in South Carolina trying to force backcountry people to take oaths of loyalty to England and then be prepared to enter battle on the side of the British. And here’s where my optimism comes in: When the “I don’t care” crowd finally takes a side, that group is what tips the balance in a fight.

In this case, that tipping is how you get totally insane polls leading to the midterms:

Wow, under 45 is more Republican than Over 45

This sea change in the political landscape amongst ordinary people doesn’t mean that those of us who have been banging these liberty gongs forever can now stop. Instead, we need to step up, in ways both big and small, loud and subtle. (I like Scott Pressler’s subtle idea, not for trolling but for persuading.)

So be of good cheer. It’s precisely because things look so bad that I’m pretty sure they’re going to get better.

The header image shows Sgt. Jasper raising the battle flag of the colonial forces over present-day Fort Moultrie on June 28, 1776, during the Battle of Sullivan’s Island, by Johannes Oertel, 1858.

For those curious about Hampton Plantation, it began in the colonial-era as a  rice plantation. The house is one of the oldest surviving plantation houses in South Carolina. (Almost all the others were destroyed by war, poverty, weather, and time.) It achieved its current form in 1791 when the owner added the magnificent columned portico in honor of a visit from George Washington. Although the Hampton Plantation exterior was not used as Tara for 1939’s movie of Gone With The Wind (David O. Selznick used the exterior of his own faux-plantation Hollywood studio along with sets and movie magic) it showed up on an album cover from the 1960s.