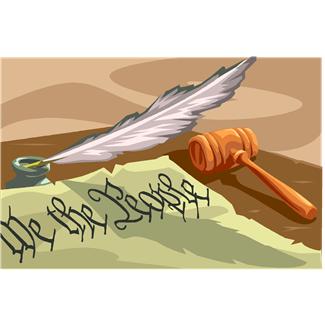 The Constitution is very clear:  Congress writes the laws; the President enforces them.

In light of Obama’s announcement today that he was unilaterally “improving” a law by ignoring its terms (i.e., the time limits contained within Obamacare), Veronique de Rugy asks a good question:

What authority does the president of the United States have to decide that he will or will not enforce some parts of the law that have become inconvenient for him politically or that are proven to have been a terrible idea?

There’s a simple answer to this excellent question.  The limit to Obama’s authority lies in the Senate.  The only thing that can stop a rogue president is impeachment — and a Senate with a Democrat majority will not allow conviction.

The real power to control Obama’s unlawful activities lies with the voters. So far, though, they’ve chosen not to exercise this power.  Although Obama had been manifestly re-writing laws to suit his purpose before the 2012 election (e.g., immigration laws and Obamacare), the voters shrugged and kept the Senate in Democrat hands.

If voters in 2014 again return Democrats to the Senate in sufficient numbers to block impeachment, the voters have granted Obama the authority to ignore the limitations that the Constitution places upon him.  It’s obviously not an express grant of authority, because the president is still violating the Constitution, but it’s an implicit grant of authority.  Like the bribed police officer at the scene of a crime, voters will simply be looking the other way.

And speaking of 2014, there’s a Ricochet thread thinking about campaign slogans.  This is the top suggestion:  “If you don’t like your Democrat. you don’t have to keep him. Vote for ______.”  I think it’s on the right track, but somehow a little unwieldy.

Given the record on which Obama and the Democrats will be running in 2014, what catchy slogans would you guys and gals suggest?