Mitch McConnell is too often a GOP stalwart (as opposed to a conservative) for my taste, but when he’s good, he’s very, very good.  He was very, very good this morning, as he attacked Harry Reid’s attempt to change Senate rules so that only 51 votes are needed to get judges onto federal benches (except for the Supreme Court):

Even though Harry Reid’s nuclear option is a red herring meant to distract from Obamacare’s many and varied failings, it’s still an enormously consequential thing. I know all about ideologically packed courts, having practiced in the Bay Area for my entire legal career, and I can tell you that blind justice is never seen in those halls.

As with everything else the Left touches, law is not about applying settled, reliable principles to known facts.  Instead, on the civil side, it becomes purely redistributive. I cannot tell you the number of cases I’ve handled that saw the judge rule against my corporate client, even while admitting that my client had the better legal case. Nor can I count how many times judges have engaged in obscene intellectual contortions to ensure a redistributive outcome. I’ve even worked on a few cases in which appellate court justices have out-and-out lied about the facts in order to achieve a specific end — and then they’ve published those cases, making them case precedent in California.

A court that owes its fealty to a political ideology, rather than to applying settled law to undisputed facts, is an inherently corrupt institution. That corruption spreads far beyond the parties standing in the courtroom. Take just one example:  I worked on a case where a woman defaulted on loan. The bank sued. The woman’s defense was that she hadn’t read the loan documents. Settled law going back to forever says that the failure to read documents is not a defense to a default. The far Left judge felt differently. On the one hand, he had a mean bank; on the other hand, he had a poor little old lady. You can guess the outcome. You can also guess that, in future, the bank increased the cost of loans to offset bad debts such as this one.  You can also bet that the little old lady went home and let her community know that defaulting on a loan in San Francisco county was a reasonably safe thing to do.

The problems with an ideologically corrupt judiciary don’t flow solely from the lessons people take away as they walk out of the courtroom, even though such lessons resonate throughout the community and affect future behavior. There’s an even more insidious problem with a system in which the judge’s pick winners and losers based, not upon facts or law, but upon their place in their hierarchy of Leftist victim-hood.  It’s also the fact that the law is utterly unpredictable if the outcome is dictated by each judge’s personal redistributive biases. Businesses cannot operate in a system that isn’t predictable. They go one of two ways: they become as corrupt as the courts, since lawlessness is contagious; or they retrench, taking their services, products, and investments out of a market that is too unreliable for them to risk. 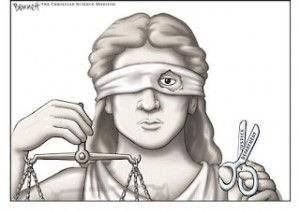