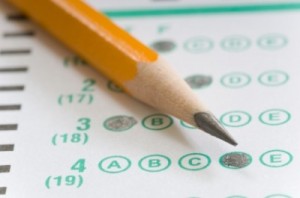 Here’s a story that’s familiar to many of my older readers, but one that may be surprising to my younger ones. Once upon a time, you’d sign up for the SAT a few weeks before you were to take it. Then, the night before the SAT, you’d go to bed a little earlier than usual. And that was it. That was SAT test prep — an early bedtime.

Nowadays, SAT test prep is a huge business. Here in affluent Marin, every teen I know has taken, is taking, or will take an SAT (or ACT) prep test. The good classes do two things: they tutor kids in the fundamentals of math and English that one needs for the test and they teach test taking techniques. These last are probably the most useful, since they show the kids the tricks of the test, and give them a way to translate test language into the academic language they already know, both in math and English. Most prep programs promise that, if the student gets with the program, he can expect to raise his test score by 200-400 points.

Today’s Most Emailed New York Times article announced that the SAT is about to undertake a big change:

Saying its college admission exams do not focus enough on the important academic skills, the College Board announced on Wednesday a fundamental rethinking of the SAT, ending the longstanding penalty for guessing wrong, cutting obscure vocabulary words and making the essay optional.

Some might call it a “dumbing down” change.  Others, however, could say that the SAT is changing simply to align itself with the realities of modern youth: thanks to bad teaching and the decline in reading anything but text messages (“r u thr? BRB.  K.  TTYL”), modern youth cannot write and has no vocabulary. That being the case, the realist would say, we may as well stop pretending when it comes to the standardized test.  (Me?  I think anything that encourages a good vocabulary should be preserved.  As Orwell knew, the fewer words you have, the fewer thoughts you have.)

Those are academic arguments.  What we’re really seeing here is another step in the road to a purely egalitarian approach to higher education.  In the old days, fewer students went to college. The rising numbers don’t come about just because the US population has grown every decade since forever. They also reflect the fact that, back in the day, a smaller percentage of the population went to college. The nation agreed that an educated citizenry was a good thing, but the societal agreement before the GI Bill was that a high school education was good enough for everyone except the “educated classes,” which meant the wealthy and upper middle classes.

The GI Bill changed that classist approach to education.  I’m not quibbling with the GI Bill’s effects.  The change was a wonderful thing, because it opened higher education to people who had the ability but, in the past, couldn’t meet the class and cost requirements.  College was still for the “educated class,” but we’d expanded the economic definition of an “educated class.”  With more young men able to go to college and get into higher payer jobs, the economy and the middle class boomed.

Of late, though, the Left has made it clear that it considers college today to be the high school of yesteryear: everyone should go, whether they have aptitude, interest, or money. It’s that last that’s especially important. Public schools may be lousy, but they’re an integral part of America’s economic infrastructure. They run on budgets set by state or local communities, and society as a whole has long agreed to pay for them (whether individual taxpayers have children or not), because they’re viewed as necessary institutions in a republican democracy.

Colleges, though, are expensive and getting more so. Much of this expense has nothing to do with education and everything to do with political correctness. Taxpayers have no say at all in how most colleges are run. They’re footing the bill in terms of taxpayer funding to public institutions, and grants and student loans to all institutions, but they’re shut out of management and oversight.  Additionally, contrary to the promise under the GI Bill and for many decades afterwards, college is no longer a gateway to well-paying jobs.  This can be traced to lots of things:  a lousy economy; more college grads depressing the market for said grads; the dramatic instability brought about by a changing internet economy (new jobs, new educators, new skills, etc.); and the lousy education too many college grads get, making them good at arguing Leftist PC polemics, but of little use otherwise.

Despite the expense, the lack of oversight, and the declining return on time and money invested, the Left insists more stridently than ever that, just as high school was once a necessity for all citizens, now college is — and it’s even better if we fund it for illegal residents too.

Where the Left runs into a problems is with the fact that, unlike public schools, which have to accept all students (legal or illegal) within the school district, colleges don’t. Despite the massive amount of public funding that comes their way, colleges get to pick and choose who will enter. How un-egalitarian . . . and how galling it is when the main comers are white and Asian middle class kids, rather than the huddled masses yearning to break free of America’s Democrat run ghettos.

Which loops me back to my starting point, which is prep classes for standardized tests. Those prep classes give the same white and Asian middle class kids yet another edge over the poor kids stuck in failing, union-run public schools in heavily Democrat districts. David Coleman, who is president of the College Board, which creates an administers the SAT, is done with that kind of inequality. He’s going to make the test easier. (Call it the Harrison Bergeron approach to test revisions.) His explicitly stated goal is to put those elitist test prep services out of business:

“It is time for the College Board to say in a clearer voice that the culture and practice of costly test preparation that has arisen around admissions exams drives the perception of inequality and injustice in our country,” Mr. Coleman said Wednesday. “It may not be our fault, but it is our problem.”

David Coleman is an idiot. (Come on, Bookworm!  Tell us what you really think.)  First, I strongly disagree with his Leftist drive to put small business out of business. Second, does Coleman actually think that the test prep businesses will just go away and that middle class parents will say, “Thank God our children don’t have to strive anymore”? Only an academic could be so dumb. What will actually happen is that the businesses will change their model and teach to the revised test. Indeed, some spokespeople in the industry have already announced that they intended to do precisely that:

While test-preparation companies said the SAT was moving in the right direction, with more openness and more free online test preparation, the changes were unlikely to diminish the demand for their services. “People will always want an edge,” said Seppy Basili, a vice president of Kaplan Test Prep. “And test changes always spur demand.”

None of the above means that it isn’t time to change the standardized tests. No one argues that they’re not as helpful in determining student performance as grades are.  But here’s the dirty little secret:  they never will be as good as grades — or, at least, grades from a good school. High performing students from high performing schools will do well in college. Sadly, high performing students from union and Democrat-run inner city schools do not do well. They are not ready for college. Or, to be more accurate, they’re not ready for the Ivy Leagues that hurl affirmative action admissions at their heads

. Two years at a decent junior college or four years at a decent four-year college would suit them better. They might not get the corner office on Wall Street, but they’ll get out of the ghetto, which means that their children might get to Wall Street. Too bad that incrementalism — meaning a generational ascendance in America’s class structure — is anathema to the Left.

The bottom line is that, no matter how the test is re-jiggered, it will remain what it always was — an inaccurate tool to admissions offices smooth out slightly differences between the thousands of high schools scattered throughout America.

But back to the SAT. (By the way, this serpentine post is as close as you’ll ever get to having a conversation with me. I tend to stay near topic, but to wander around it a lot, bringing in varying threads and ideas that seem to me to be relevant and helpful.)

The fundamental problem isn’t the SAT and it isn’t test preps. Instead, it’s that our governing class has decided to make college as mandatory as high school. It’s doing it without a consensus or a plan, it’s paying for it on the back of the middle class, and it’s gaming the system to try to create an egalitarian outcome for decidedly inegalitarian institutions.