Yet another day where I start with an apology for not writing more or writing sooner. I had what I think is a fairly severe arthritis flair-up, loaded myself up with anti-inflammatory meds, and took a long nap. Thankfully, I’m feeling better and moving easier, so it’s time to write! Here goes:

After years of hiding his head in the sand, Obama has suddenly realized that there are dangerous people out there, and they’ve got their guns aimed at us. He’s now desperately trying to rush us slowly into something that looks like war, acts like war, and talks like war, but isn’t actually war, and he’s not going to listen to any advice from old fogies like generals or admirals. Jonah Goldberg suggests that, given Obama’s ignorance, reluctance, denial, and ineptitude, Obama might want to slow that “rush” down a little:

We are through the looking glass when it is okay to say that opposition to requiring elderly nuns to pay for birth control is part of a “war on women” but airstrikes and coordinated ground attacks by allied militias aren’t like a “war” on terrorists.

Although we shouldn’t forget that there is one man brave enough to step up and say there is a war go on — John Kerry! Yes, John “Jen-jis Khan” Kerry, has announced that there is a indeed a war going on, between ISIS and . . . not not the United States or the West. (Fooled you!)

Instead, John “yes, there is a war” Kerry has announced that ISIS is at war with Islam. No wonder the folks at Power Line are wondering whether John Kerry is actually a GOP agent, working hard to discredit the Democrats.

Also on the subject of not-War, you can’t afford to miss Daniel Greenfield’s “Don’t Mention the War.”

The horrors of war by lawyer

When I reviewed Bing West’s One Million Steps: A Marine Platoon at War

[I]f the Marines sought to engage in any more than a running skirmish in response to shots fired while they were out on patrol, a battalion, not of fellow warriors but of lawyers, had to review the proposed fight plan first to make sure that it didn’t violate the ROEs.  Even knowing about this bureaucratic, legalistic twist on warfare, reading about it in One Million Steps is still a shock.  It’s just mind-boggling that lawyers were calling the shots in a genuine ground war (as opposed to the lawyer’s usual field of battle — a courtroom). Wars are fluid, dynamic situations; lawyers are stolid, cautious, and risk-averse. To make fighters in the war dependent on lawyers is insane.

It’s not just on the battlefield that the lawyers’ innate caution is bolloxing things up with it comes to fighting a fast-moving, deadly, and determined enemy. Daniel Henninger explains that way up the line, at the Obama command level, lawyers are also interfering with what should be battlefield strategies (emphasis mine):

The complex elements of modern American warfare include not only sophisticated ground-based troops but air power, unmanned drones, electronic surveillance, and the capture and interrogation of enemy combatants. Every one of those elements of U.S. military power has become a litigation battleground.

However intellectually interesting these disputes over our rights and values, each adds another thicket of legal consideration before, or even during, military action. There are now 10,000 lawyers in the Department of Defense. The legal staff assigned to Gen. Dempsey alone could fill a law firm. No one goes to war in this country until those DoD lawyers—plus lawyers at the Justice Department and White House—define in detail the parameters of battle.

The U.S. military has become a giant Gulliver wrapped in a Lilliput of lawyers.

Indeed, the White House has just announced the our nation’s top lawyer himself — that would be Harvard Law Review editor Barack Obama — will have to sign off on every single strike in our not-war against Islam:

The president hasn’t yet given the green light for an attack on Islamic State militants in Syria, but the U.S. military campaign against the group there is being designed to allow President Barack Obama to exert a high degree of personal control–going so far as to require that the military obtain presidential signoff for strikes.

Do you remember Jodi Kantor, in The Obamas, telling about Obama’s devotion to his own skills:

Obama had always had a high estimation of his ability to cast and run his operation. When David Plouffe, his campaign manager, first interviewed for a job with him in 2006, the senator gave him a warning: “I think I could probably do every job on the campaign better than the people I’ll hire to do it,” he said. “It’s hard to give up control when that’s all I’ve known.” Obama said nearly the same thing to Patrick Gaspard, whom he hired to be the campaign’s political director. “I think I’m a better speechwriter than my speechwriters,” Obama told him. “I know more about policies on any particular issue than my policy directors. And I’ll tell you right now that I’m gonna think I’m a better political director than my political director.” (p. 66.)

Now we can add something new to Obama’s list: In his own estimation, Obama is a better military adviser than people who have actually studied and gone to war.  This is what happens when a man of few distinguishing qualifications starts believing the media’s PR about him.  He’s not just a “black Jesus,” he’s also the second coming of Alexander the Great.

Funny illnesses cropping up all over

I mentioned at the top of this post that I might have had a serious arthritis flare-up. It’s entirely possible, though, that I’m actually getting sick. A lot of wacky illnesses are circulating, not the least of which is the hitherto “unknown in America” mystery virus hospitalizing kids all over the place, which is not a common “back to school” feature.

A Power Line reader has suggested what we’re all thinking: Is this a byproduct of the sick, illegal kids the Obama administration has been shipping all over the US? Perhaps what we’re seeing here is the indigenous people’s revenge: after 300-400 years, they’re going to wipe us out as surely as Europeans did back in the 16th and 18th centuries, when they exposed vulnerable indigenous populations to diseases that had become tolerably endemic in European cities.

I told my mother that an ideology’s approach to Israel tends to be an extremely accurate way to measure whether it’s a good ideology or not. Look anywhere in the world, and wherever you find Israel-haters, you’ll find racism, totalitarian impulses, homophobia, misogyny, a fondness for euthanasia against any vulnerable populations, etc. Knowing this, it’s worth thinking about the implications flowing from the Democrat party’s ever-increasing hostility to Israel.

More evidence that, when he scratch a Leftist, you find an antisemite

Etsy.com, an online sales collective for artists, recently banned the sale of any goods that reference the Washington “Redskins” on the ground that the team’s name and logo are so offensive it would pollute the site to carry them. Etsy, however, is perfectly happy marketing swastikas. Read all about Etsy’s peculiar biases and preferences here.

I’ve never shopped at Etsy, nor had I planned ever to shop there, so I can’t make a statement by boycotting the site. But if I did shop there, I’d immediately stop doing so.

One Leftist anti-Semite just got the recognition she deserves

Over at the Watcher’s Council, council members have voted for this week’s weasel, a Leftist anti-Semite and all around idiot. You’ll have to visit the site to see which specific Leftist, antisemitic idiot won, though.

I believe every Jew should own, or at least know how to fire, a gun. (I also believe all Jews should know self-defense.)

I only recently learned that there was a Jewish pro-Second Amendment in the US, called Jews for the Preservation of Firearm Ownership. Unfortunately, through a disastrous combination of ill-health and health-related fatalities, the JPFO looked as if it was going under. Fortunately, though, those still able to manage the group realized that they needed to reach out for help. The JPFO is now merging with the Second Amendment Foundation, a forty-year old organization with 650,000 members. Yay.

More evidence, if you needed it, that climate change is faith, not science

We’ve discussed here before the fact that, because climate change is a non-falsifiable theory, it’s religious in nature, not scientific. If you’d like further evidence of the fact that climate change must always be accepted as core truth, no matter how the data changes, get a load of this AOL news headline: “Global warming likely to cause colder and snowier winters, scientists say.” And yes, the “news” story attached says just that: global warming means global cooling — Praise be to Gaia!

The scientific consensus was wrong AGAIN

I’ve never liked artificial sweeteners, since I think they taste nasty. Also, while I’m not one of those people who insists on all-natural, all-organic food, I viscerally felt that the body handles real sugar better than fake stuff. In my mind, it was better to eat real sugar in smaller amounts, rather than to load up on artificially sweetened food.

A doctor acquaintance of mine ridiculed me. His argument? If you ever go to a medical conference that offers both sugared and artificially-sweetened soda, the doctors will all go for the artificially sweetened stuff.

Well, in another blow to conventional wisdom amongst scientists, it turns out that artificial sweeteners mess with the body’s chemistry, contributing to obesity and diabetes among other things. Let’s just say that I’m not surprised, either about sweetener’s dangers or about the scientific community being wrong again. 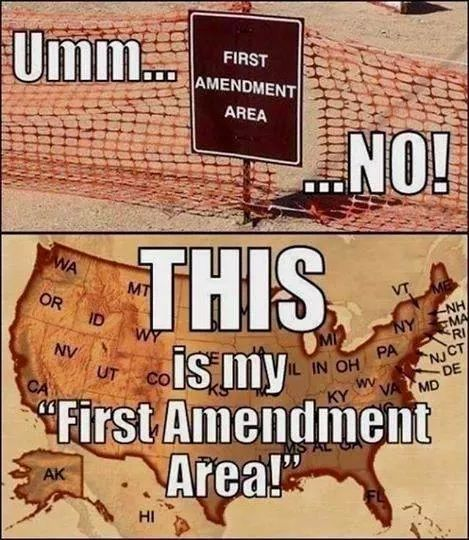 Over at Penn State, however, the campus authorities wouldn’t like anything about that poster. Although they have a “free speech” area, it turns out that they only allow such speech as they’ve previously vetted and permitted to occur in that area. And we wonder why American college students come out dumber than they went in, despite their glossy patina of Marxist catch-phrases.

Caped Crusader sent me the link for a beautiful elegy for an America lost:

We, largely rural kids of the small-town South, represented without knowing it a culture, an approach to existence, and a devastating principle: You can’t impose decency, honesty, good behavior, or responsibility. They are in the culture, or they are not. If they are, you don’t need laws, police, and supervision. If they are not, laws won’t much help. And this is why the US is over, at least as the country we knew.

I should add that the kids in my community have a good culture too. They don’t run to gangs, they work hard in school, and, except for drugs and alcohol, they’re generally law-abiding. But rather than seeming like the face of America, they often seem like an aberrant group, peeled out of the 1950s, with a stop-over in the 1960s to pick up on the drug culture.

This isn’t one of Klavan’s best, and I’m not surprised. The administration has cut itself adrift from reality, and it’s hard to parody lunacy. Nevertheless, Klavan gives it the old college try and it’s still a fun video: