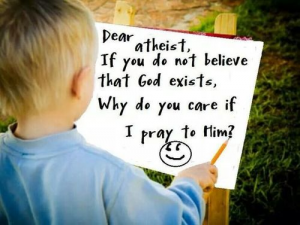 My sister watched The Unbelievers, a documentary that follows Richard Dawkins and Lawrence Krauss as they try to convert people to atheism, with science as the true faith. That’s all fine. If they want to proselytize to willing listeners, good for them. I have just a few comments, based upon what my sister told me, and what I know generally about Krauss and Dawkins:

1. My sister said that Krauss and Dawkins spoke scathingly of people who believe in transubstantiation (the conversion of the wine and wafer into the blood and body of Christ during the Catholic service).

I explained that the belief in the body and blood of Christ, combined with the story of Isaac, which forbids human sacrifice, is one of the few delicate strands keeping modern civilization from slipping back into human sacrifice. The desire to shed human blood to propitiate random Gods or to take on the strength of the dead lies very close to the surface.
Don’t believe me? Just witness the way the Islamists are boasting about eating parts of their bodies. Even their beheadings and crucifixions are intended as a sign of their worshiping on the Islamist altar.

2. My sister also told me that Dawkins and Krauss claim that the Greeks and the Romans understood higher mathematics, that fundamentalist Christians destroyed that knowledge during that Middle Ages, that moderately religious Muslims raised it up again during our Middle Ages, and that fundamentalist Islamists are destroying knowledge. From this potted history, Dawkins and Krauss conclude that religion is bad because, when fundamentalists grab hold of it, knowledge vanishes. (Yes, it is hearsay from my sister when I say that Dawkins and Krauss relied on this potted history for their conclusion but I still accept it as true because (a) I’ve heard other atheists make the same argument and (b) my sister has proven reliable on these things. Now, back to how dumb this argument is.)

First, for so-called logical people, the syllogism that (a) fundamentalists destroy knowledge; (b) some religions have fundamentalists; (c) therefore all religion is stupid, is obviously false. Do I need to explain why or can I take a short cut here and assume that you are all with me on this one?

Second, as I explained to my sister, what brought about the Dark Ages wasn’t Christianity, which was small potatoes when the Roman empire (which was the inheritor of some Greek knowledge) collapsed. It was the pagans who destroyed the Empire and, with it, its store of knowledge. It was the Christians, starting with monks sequestered far away in Ireland

who began the laborious process of bringing light and knowledge back to the darkness. This process was not a straight line and there were definitely people and nations who perverted Christianity to suit evil ends. Ultimately, thought, it was this Christian journey that led to the Enlightenment, to the end of the slave trade, to the end of child labor, to the beginning of the 40 hour work week, and to most other civilized beliefs we have long taken for granted in the Western world.

As for the Muslims, yes, the Muslim world had preserved some of the Greek and Roman mathematical and scientific knowledge, and as well as the marvelous Indian numbering system that goes under the misnomer of “Arabic numerals.” During laxer periods in medieval Muslim history, some people — mostly Jews or former Jews — relied upon this knowledge to come up with important ideas.

But mostly, no, moderate Muslims were not a Renaissance of discovery and creation. Just as was the case when 19 al Qaeda terrorists used an airplane to destroy the Twin Towers, the medieval Muslim world created nothing. It simply hijacked knowledge from the people it conquered. This isn’t to say that I’m not grateful that those Medieval Muslims, unlike today’s fundamentalist Muslims, chose to salvage, not destroy, books and some limited ideas. I’m just saying that only the uninformed could pretend that they actually had an intellectually dynamic and creative culture.

So, to the extent that Krauss, Dawkins, and other atheists attack religion using a crude, false syllogism and a lot of historical ignorance, I’m neither persuaded nor impressed.

3. Dawkins and Krauss advocate science as a substitute for faith. I firmly believe in science, which I define as things that are proven true through careful observation or reliable experimentation, or everything that can be inferred from observation and experimentation. Nevertheless, science is no substitute for faith and, indeed, becomes just as dangerous as any other fundamentalist faith when people fall into that error.

It’s true that the Big Bang arguably challenges the Genesis version of creation. However, some would say that the Genesis version is an allegory, since it tracks the earth’s development, both geological and biological with rather uncanny accuracy, rather than a Bronze Age creation fantasy. Whatever. Whether Genesis is a truth, a fable, or an allegory, it doesn’t mean there is no God.

But why get caught up in origin stories. Let’s talk about the world in which we live. Moreover, let’s talk about my favorite example of elevating a scientific theory to the realm of faith.

Where to begin? Every prediction has proven wrong. Every allegedly new phenomenon is, in fact, same old same old. Despite being wrong again, and again, and again, nothing shakes the believer’s faith in the “science” of climate change.  When a doctrine is infallible, it’s not science; it’s faith.

We can also look at a less contentious subject than climate change to prove how wrong science is.  When it comes to diet, it seems as is everything science has ever taught us is wrong. We were told to give up all fat, eat carbs, and use fake sugar. We promptly become obese and diabetic. It turns out that natural fats in moderate quantities are beneficial, that carbs in excess are bad, and that fake sugar messes with our bodies. It’s Sleeper all over again.

Just the other night, on 60 Minutes, scientists proudly admit that, despite humans living with them for 15,000 years, scientists know next to nothing about dogs. I could even argue that they know less than nothing about dogs.  For years many scientists have claimed that dogs do not know “love,” something every dog owner knows is a manifestly false statement. Only now are scientists catching up to the love our common sense always knew was there.

Over and over again, scientists are forced to concede their ignorance and errors — and yet the true believers consistently assert that anthropogenic climate change is unfalsifiable. It must always be true. If that’s not faith — and one in which Dawkins (or, at least, his foundation) and Krauss (who is not a “climate scientist”) unquestioningly believe (see here, beginning at 13:30), I don’t know what it.

(For those interested, Lord Monckton does a beautiful job of debunking the climate faithful who try to debunk the skeptics.)

Having said all of the above about The Unbelievers, I have to say something nice about two famous atheists, one who is incredibly rude and vulgar (that would be Bill Maher) and the other of whom is polite (Sam Harris).  Both of them stood against Ben Affleck, who desperately tried to argue there’s nothing illiberal about Islam.  Amusingly and expectedly, Affleck supported his position by throwing out the term “racist.”  This is an idiocy that could only come from a Leftist who doesn’t understand that Islam is not a race but is, instead, a religion that can be and is embraced by people all over the world, regardless of race or natural origin.

Thinking about Affleck’s last-ditch argument, I have to say that Leftists are constantly unable to separate ideology and behaviors from skin color.  You know, I think they have a name for people like that.  Wait.  Wait.  It’s coming to me.  Oh, yeah!  Racist.  Affleck’s a racist.

And yes, I loved it when Affleck says “we’re endowed by our forefathers with inalienable rights.”  No wonder the Left is so willing to throw those rights overboard.  They don’t come from a Creator; they come from dead white men.

Anyway, you  have to see the video to appreciate it fully.  Here it is:

I disagree with Harris and Maher on many things, but they are brave and honest about this and deserves kudos. Also, to the extent I’m vaguely religious, I pray constantly for their safety, and hope that they don’t end up like Theo Van Gogh.

Also, since I’ve wandered into the subject of Islam, I’d like to commend to your attention an incredibly solid post explaining why it would be an incredible mistake for America to define itself by fear of radical Islam. Our culture may mot be perfect, but the Islamist culture is monstrous and, for that very reason, fundamentally weak.