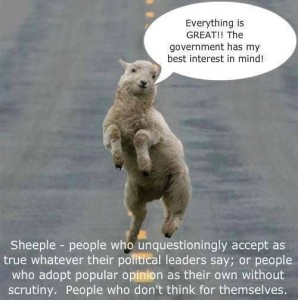 I was a little girl when the phrase “Question Authority” became the mantra for teens and young adults. To give that generation credit, even as they stopped bathing and warped their brains with drugs, they really did make an effort to challenge the shibboleths that the academic establishment and the media sent their way. Unfortunately, all of their ultimate conclusions were absolutely wrong, but at least they tried.

These wrong conclusions have now become the academic, political, and media shibboleths of the 21st century. War is bad; the current “science” emanating from the liberal establishment cannot be questioned; Israel is an evil, apartheid state; whites created a corrupt America so that they and their misbegotten creation must be destroyed; illegal immigrants are all victims of white hegemony and need to be welcomed with open arms; Muslim terrorists are merely disappointed job seekers; etc.

What’s terribly sad about the current generation of teens and young adults is that they wouldn’t dream of questioning these authoritative pronouncements — and this is true despite the fact that they are the first generation to have at their fingertips a powerful tool that gives them all the information they need to ask questions and, perhaps, come up with different answers.

In my comfortable, affluent suburb, one that’s raising the next generation of Ivy League grads who will automatically step into the highest ranks of politics, commerce, and medial, there are no rebels. There are kids who, without irony, call themselves “rebels,” but the sum total of their “rebellion” is drugs, alcoholic, and sex. There is no rebellion of thought.

It wouldn’t occur to these thoroughly indoctrinated darlings to question authority. They accept as true everything that their teachers, the government, and their media figures tell them. Global warming? Must be true. Culture of Rape on America’s unusually safe college campuses? Must be true. Israel is an occupying apartheid state? Must be true. Blacks need welfare to survive in a world of white privilege? Must be true. And so it goes, with these well-bred little sheeple proudly puffing, guzzling, and sleeping around, all the while accepting unthinkingly everything fed to them.

The April Fool’s edition of the student newspaper perfectly encapsulates the current young generation’s refusal even to peek outside of the box. (To preserve both my and the school’s privacy, I’m keeping the school’s identity secret.)  In the spirit of jest, the paper published a fake opinion piece entitled “Global warming is a scam and we are all brainwashed.” This attempt at satire purports to accept as true the arguments countering global warming, thereby exposing them to ridicule.

The problem is that the author has no idea what those arguments are. In writing her piece, she made no effort to read what’s challenging the “settled” science. Instead, in a marginally literate way, she simply sets up a series of infantile straw men and then blows them down with a puff of ill-informed snark (all sped along by random commas):

Those crazy liberals try and pull at our heartstrings by showing poor little polar bears sitting on melting icebergs. But, [sic] why do we want to deprive those polar bears of a bit of sun. They are so pale, [sic] just let them get a bit of a tan.

Maybe I’m not a crunchy organic green person, but I feel like [sic] we should just be able to live our lives. We are part of this planet too. If we “destroy it” then we have the right. We are obviously the most intelligent life form on purpose.

Think about the ice age. There was so much snow and mammoths [sic]. Who caused the ice age? Dinosaurs, obviously, and now they are dead . . . or are they. [sic] There [sic] also all those people who believe that dinosaurs are extinct. Which is ridiculous, [sic] dinosaurs are all around us. They are just invisible.

My brain hurts.  And here’s something that should make you even more dismayed about the sheeple generation: The quotation you see above comes from one of the top-rated high schools in the United States, home to America’s “smartest” students. Learning about that rating, I had to ask myself, “Are these smug, uninformed, incurious little sheep really smart?”

I don’t think they’re smart at all. They may have the genetic equipment that enables smarts, and they’ve certainly mastered the art of tests, but their lifetime of unquestioned indoctrination makes them robots, not thinkers.  We have managed to produce a well-groomed generation of drones. And so, ironically enough, it seems that it’s not the flying kind of drone we should fear; it’s the human kind.